John John Florence can taste the title after Medina bows out in Round Three.

After suffering through one and a half rounds of awful closeouts at Peniche, a popular decision was made to take the MEO Rip Curl Pro Mobile for yesterday’s competiton. Pico do Fabril was the spot chosen, a rippable beach break in an agricultural zone located over the peninsula to the north-east of Peniche. To the relief of the competitors it was offering a whole lot more to work with. However, the surfers already knew this because every one of ‘em had been surfing it all week and had been screaming for the move since the event began.

Frustrated Surfer’s Rep Ace Buchan, made his feelings known on the matter when interviewed by Strider after his round two loss to Matt Banting. “To be honest it’s pretty frustrating, He began. “It’s been pumping for three days and we’ve been sitting at Supertubes watching closeouts. It’s meant to be world’s best surfers in the world’s best waves, and this is meant to be a mobile event and to be frank this move has come two days too late.”

With such heavy implications for the world title on the line, the move needed to happen, it’s just lucky that it did before any major world title ramifications occurred.

The first order of business at the new venue was to finish the back half of round two, but what everyone was really waiting for were the round three heats containing John John Florence and Gabriel Medina.

The first to hit the water was JJF. Matched with ever-dangerous local wildcard Frederico Morais, it was always going to be a nail-biter, and one of the biggest tests thus far in John’s pursuit of the world title.

The heat started slow and at the halfway point of the heat it was only Frederico who had ridden a wave. While the old JJF might have been tempted to swing on an average wave and risk utilising his freakish abilities to manufacture a score, the new John sat steely in the lineup, waiting for his moment.

That moment came when John eventually swung on a solid left. The Hawaiian teed off, delivering four precise and calculated backhand belts, two of which freed the fins, earning himself an 8.50. He backed that up with a maturely ridden 7.77, shutting out Frederico.

It was Medina’s move.

Gabriel would surf in the very next heat, against and energised Jeremy Flores. It’s no secret that Jeremy is an emotive surfer, and he went into the heat riding a wave of confidence after a huge round two victory over Matt Wilkinson, one that shut down the Aussie’s hopes of a world title in 2016.

Medina was also in fine form. His board seemed nothing more than an extension of his body during his round two heat against Ryan Callinan – the spark and fleet footedness that took him to Brazil’s first ever world title looked like it was back in place. When Gabriel is in that kind of zone it’s hard to envision him being beaten. Would the Frenchman find a way?

Medina struck the first blow after exiting a throaty left tube with the spit before delivering a savage gaff to the end section, earning himself a 7.17

Jeremy would chip away at a few rides, but he couldn’t match Gabriel’s score. That was until he split from Medina and found a steep left on the inside, delivering a series of passionate and powerful blasts before signing off with a long roof-ride for an 8.00.

It was now Gabby’s turn to get busy. Trying to find a reply he rode a multitude of waves but fell short. He then pounced on a juicy little left and got to work. He began with a fins free snap, followed by a beautiful grab-rail reverse. He was on his way to a big score, but the wave fell asleep after his second move, forcing gabby into some down time he couldn’t afford. He finished the wave strongly with a crisp belting of the end-section but the judges only threw him a flat 7.00 and he remained in second place. Judges hate downtime.

Jeremy then nailed the heat shut with a well-surfed 7.77, delivering John John a shot at the title here in Portugal.

The scenario is as follows:

Buckle in ladies and gentlemen, this is gonna get interesting. 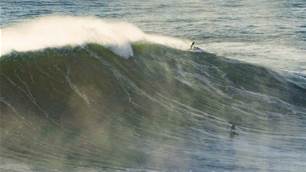 Watch: Italo Ferreira Surfs the Biggest Waves of His Life 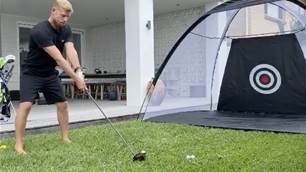