Parko gets outpointed at his favourite event of the year.

North Straddie’s Ethan Ewing cemented his status as a style icon of the future with a win over Joel Parkinson at the 2020 Burleigh Single Fin Festival over the weekend.

Burleigh boy and long-time event commentator, Terry ‘Tappa’ Teece, described it as a fascinating contrast in approaches between the two, with Ewing’s ‘succinct’ and ‘tight’ turns in the pocket outpointing Parko’s drawn-out lines.

But for all suggestions of a symbolic passing of the torch between the two, Tappa said they were both gunning for the title.

‘I tell you what, Parko wanted to win it,’ he said.

The one-time world champ and two-time single fin fest winner again rode the Al Byrne channel-bottom that’d served him so well in the past, but Ewing, who gained a late entry into the event after being granted permission to surf in it from WSL commissioner, Pat O’Connell, found his own magic weapon in a late-70s Jeff Darby. After winning, he added another board to his collection with the beautiful prize of an Ian Byrne/Mt Woodgee channel-bottom swallow tail.

‘That’s what it’s all about,’ Tappa said. ‘It’s not about money. It’s about winning it and getting the board.’

Rounding out the men’s final was Oney Anwar in third, local favourite Liam O’Brien in fourth, Luke Hynd in fifth and Mitch Crews in sixth.

Dimity Stoyle, wearing a flared wetsuit for the occasion, not only took out the women’s event but the most stylish surfer of the event award.

Parko’s nephew, Ty Richardson, went one better than his uncle, winning the juniors.

And in an all legend affair, Occy continued his latest renaissance by claiming the heritage heat over Brad Gerlach, Guy Ormerod, Luke Egan, Margo, and former Stubbies winner, Peter Harris.

With no segregation between the competitors and the crowd, Tappa said the event retained a grassroots vibe that few contests could match.

‘It’s like going back in time,’ he said. ‘There’s no VIP crap going on. All those guys just love coming. They all just sit around and hang out.’

Despite less than ideal waves and a rainy start to finals day, the event drew another big crowd, with an estimated 3,000-plus people bouncing around to local band Hanlon Brothers by the time the surfing was done.

And with this year’s entries filling up in less than 90 minutes, Tappa said next year’s event could see an invitational format introduced to deal with its growing popularity.

But that’s a problem for next year, with Tappa summing up the 2020 event as succinctly as an Ethan Ewing top-turn.

ALL PHOTOS IN GALLERY BY SIMON 'SWILLY' WILLIAMS 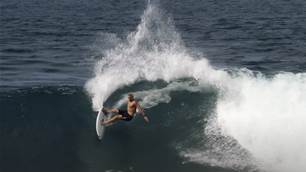