At last a few solid lumps for the wave deprived east coasters.

Truth be told, the swell was a little too south to really ignite the Gold Coast points, but after a long swell drought on the east coast, the Goldy crew were happy to be flying down the line and hiding behind the occasional curtain.

The Superbank had its moments , but many surfers, including Mick Fanning, headed down to Burleigh for their barrel fix. Meanwhile D'bah tossed up wedging left ramps, offereing Gold Coast goofies a rare chance to fly frontside.

Occy was back in the water, reportedly putting on a display of vintage backside surfing in the wake of announcemnets there will be a World Masters event in the Azores Islands this year.

According to this gallery's photog, Simon Williams, Occy is looking like a red-hot favourite for a Masters title.

All photos by Swilly 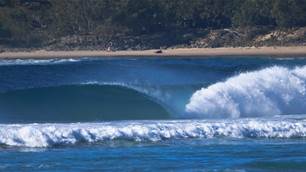