After a breakfast of buffalo curd, fruit and treacle (a tasty Sri Lankan staple­) we head south in a van loaded with little but boards, water and peanuts. We’re eager to escape the Arugam Bay crowds and are well aware there are other right points on the Sri Lankan east coast, each with its own distinctive nuances.

The narrow bitumen strip we drive along, winds through a sparsely vegetated savanna landscape that somehow makes you feel as though you are in Africa instead of South Asia. We’re hoping to encounter elephants, which are commonly sighted in a region that fringes the Yala National Park. Instead we are greeted with hordes of saffron-robed, Hindu pilgrims. The scorched bitumen does nothing to deter the road warriors who wave and cry out as we fly past­ – a carload of well-fed westerners on a different kind of pilgrimage. 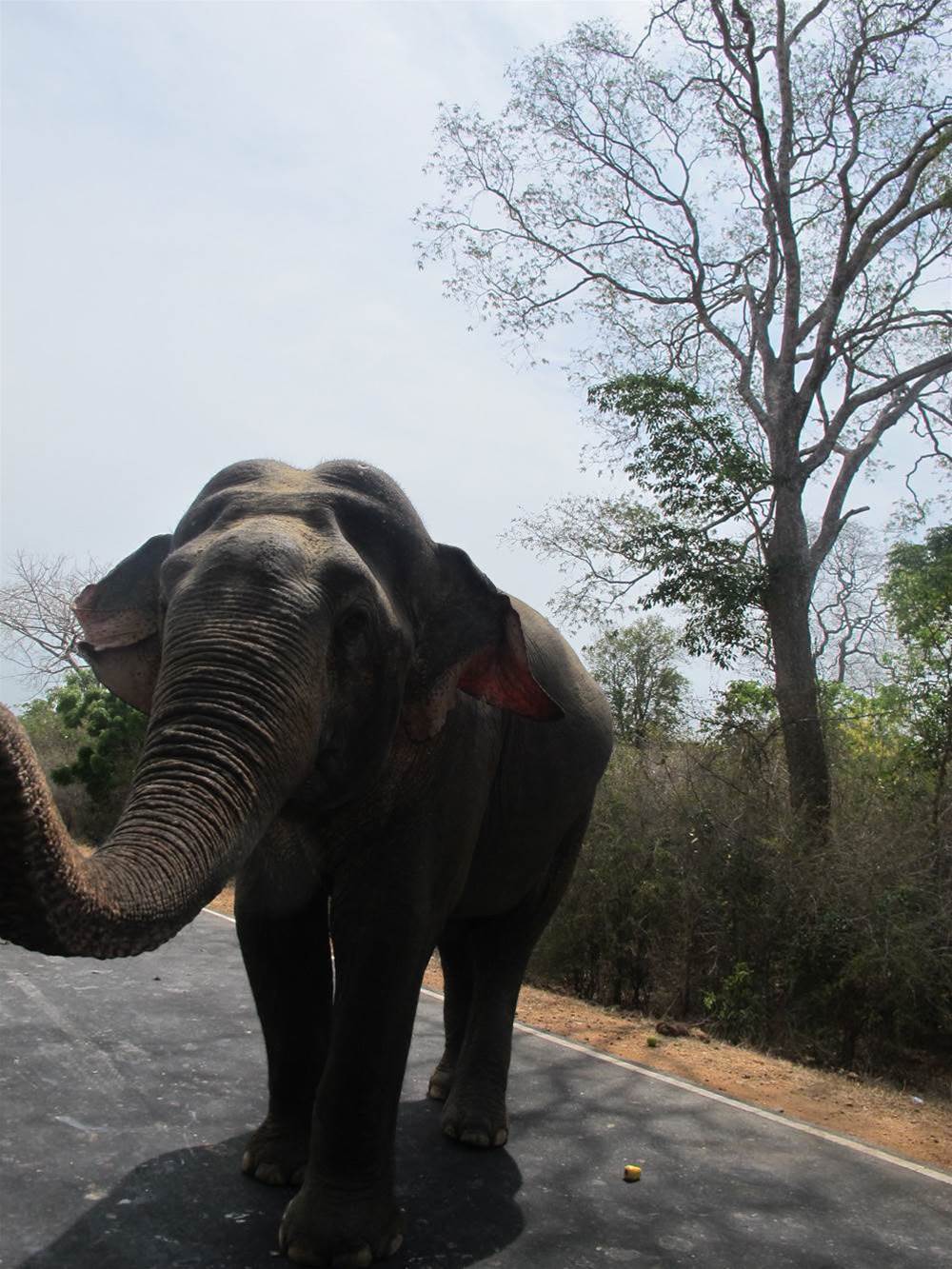 Sri Lankan road block spotted on another section of the trip
An hour into the drive we make a turn off, and the tar road becomes more of a dirt track that snakes through low scrub­ – we don’t spot any elephants but wild peacocks scurry across the baked earth in every direction and herds of water buffalo laze beneath whatever shade they can find in the arid expanse. 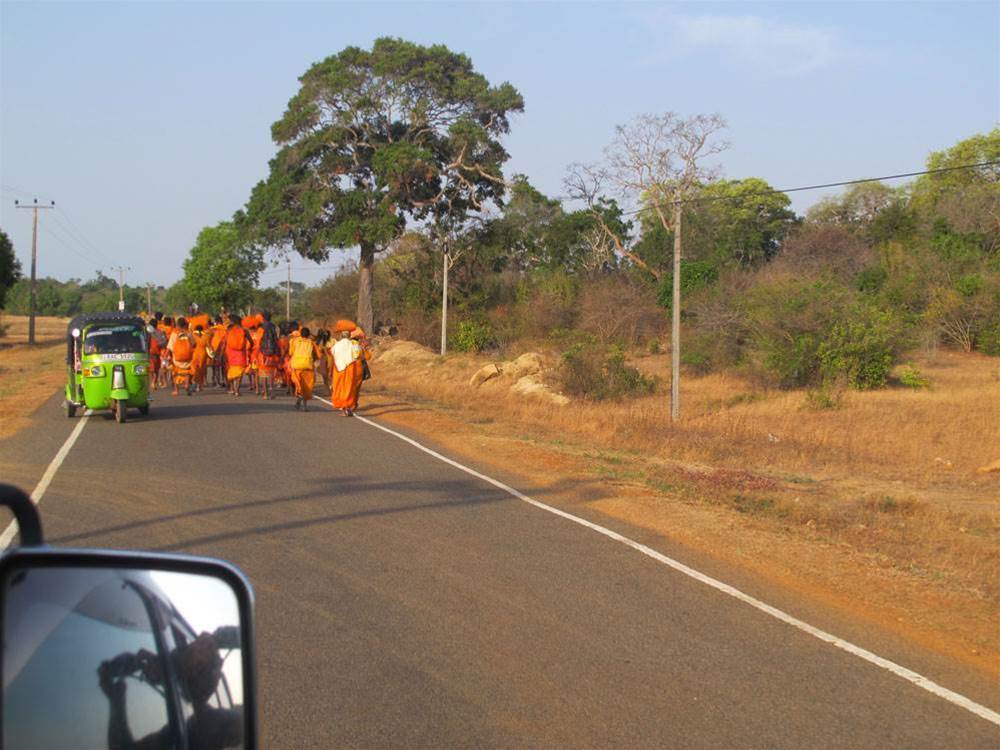 Hindu pilgrims owning the road just outside of Arugam Bay
Arriving at our supposedly isolated destination, we discover a few thousand of the orange pilgrims have set up camp in the scrub back from the beach and are engaged in the day-to-day tasks of outdoor living. It seems the nearby temple, built in honour of the deity Murugan, is a stop-over on the pilgrimage to to Kataragama temple in the Southern part of the island. 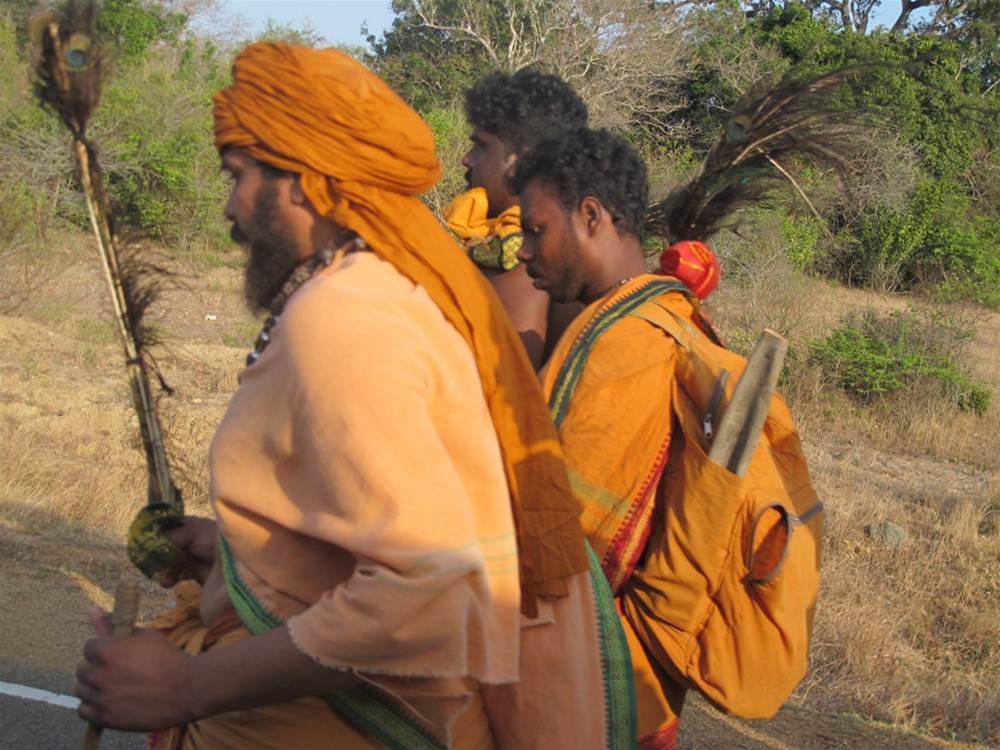 A pilgrim carries a peacock feather to keep him company on his long journey.
Strange concoctions are being prepared over makeshift fires, several people are washing beneath a hand-operated well and kids duck and weave in every direction. Although there is no music blaring, it feels like a rave party with an orange dress code. Although none of us really understand what is happening or to which God they are paying homage, there is a distinct sense that we are witnessing something very unique and far removed from our own daily lives. The only drawback is the piles of plastic and rubbish that have accumulated around the makeshift camps. Hinduism and Buddhism are celebrated in these parts but it seems environmentalism is yet to gain popularity.
As we make our way to the beach we are swooped upon by a platoon of kids who are enchanted by our surfboards. They can’t speak English, but convey their understanding of our purpose by mimicking the act of riding waves with their hands. Pretty soon each of us has a personalized board carrier, not so much because we wish to alleviate the burden but rather as a result of the fact that our new ‘machans’ (Sri Lankan slang fro buddy or mate) insist on acting as porters. After ten minutes of trekking in energy-sapping heat we are greeted with a right hand point that looks like something from another planet. 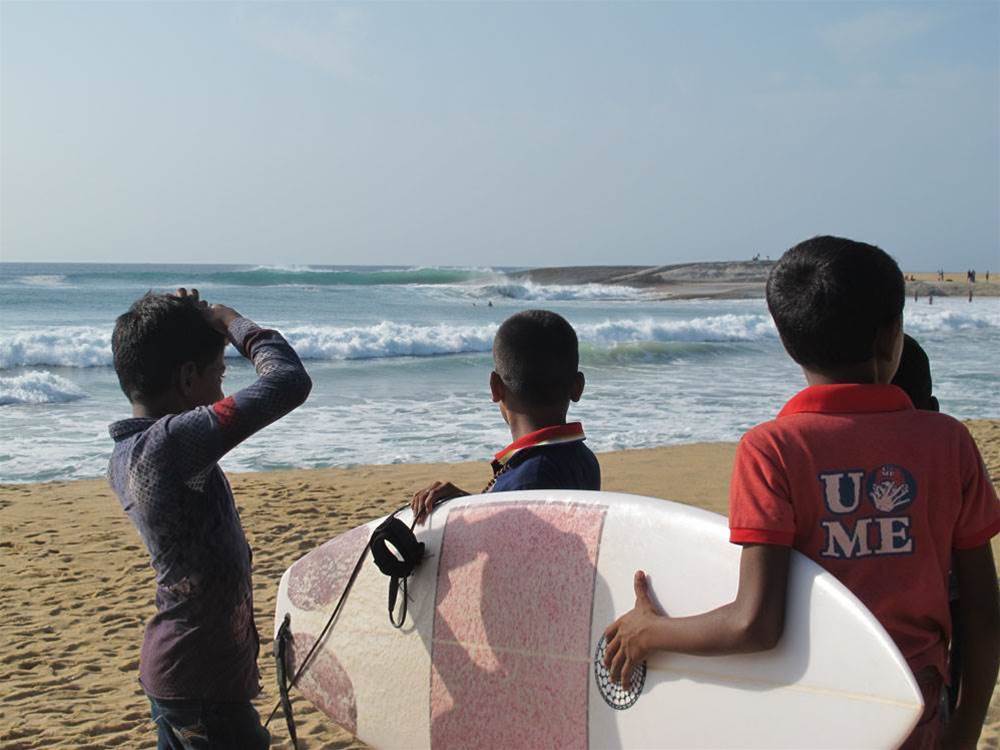 Our eager board porters checking out a set.
The rocky headland slopes gradually into ocean and is covered in a creamy layer of foam every time a wave crashes into its outside edge. Fortunately the access to the wave is as easy as rolling down a dune into the shore and making a short dash to the lineup in the shadow of the other-worldy point. 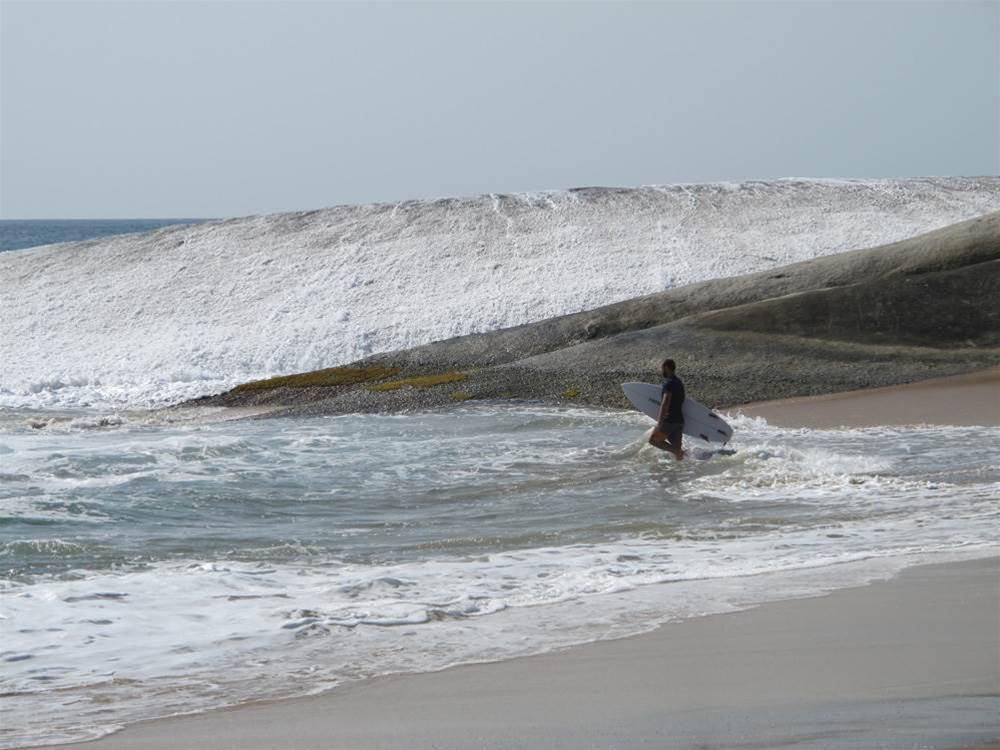 Easy access in an other-worldly setting
My friend and I are equipped with an MR twin fin and a performance style fish by Stuart Paterson (PCC), while Roy, our expat guide, rides his Firewire Almond Butter model.The boards prove to be the ideal craft for the two to three foot runners, which collide with the point before reforming into mellow but rippable walls.

Hypnotized by the trippy setting and the zippering right walls we do lap after lap, ignoring legs which ache from the long rides and return walks, and fighting against a desert heat, which lends lethargy to every movement. 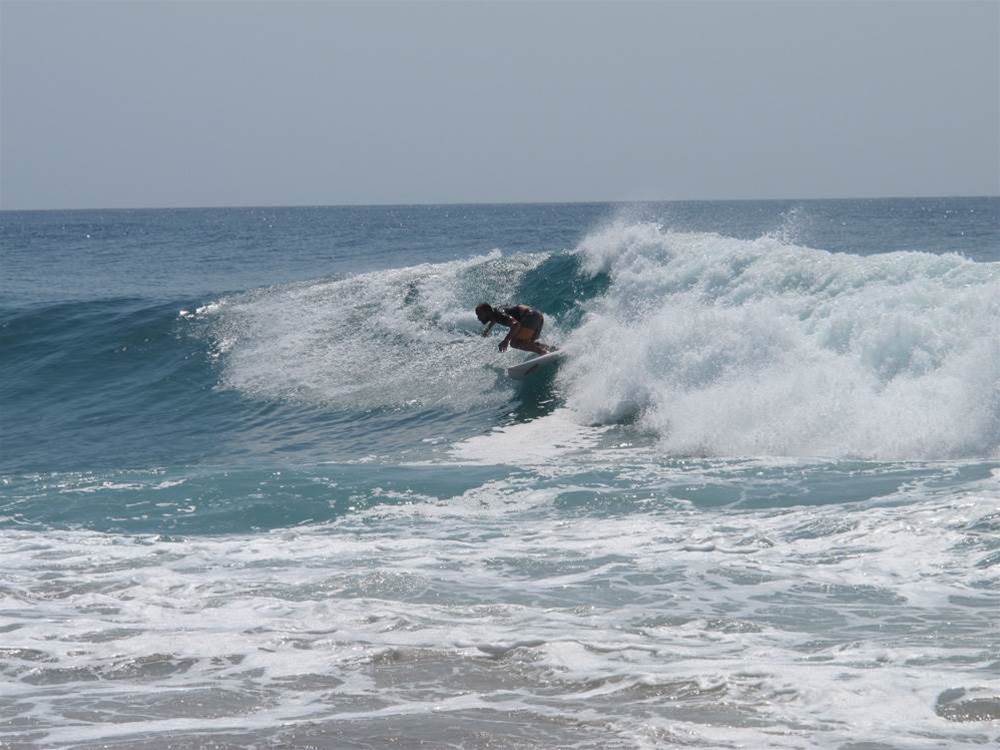 Winding up for a long ride on the MR twinny.
We share the lineup with only a few others and by mid-day we are in a contented state of exhaustion; happy to trudge back to the car where the orange pilgrims are growing in numbers; preparing for another night of wild celebrations in honour of some invisible force. Meanwhile we’ve made Gods of waves for a day; our temple a cone-shaped headland that sculpts swells into dreamy walls. Yes, we are world’s apart from the colourfully dressed worshippers but as I take a final look around I can’t help but feel we are all chasing the same kind of spiritual high… 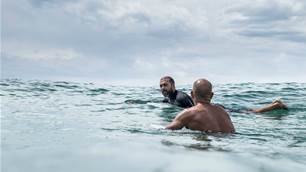 The Interesting People You Meet in the Surf