A year when wave quotas were weighed against COVID cases.

2020 will always be remembered as a dark chapter in history. While Australia was spared the worst of the modern plague, it still claimed our friends and family, wiped out our jobs, and saw our lives uprooted.

If there was perhaps one saving grace amidst all the turmoil and chaos it was surfing. Subjected to the torturous but often necessary restrictions of lockdown, paddling out for a few waves was one way to preserve sanity. And as it happened our great southern land was blessed with a bounty of waves in 2020. The east coast in particular was bombarded with swell through autumn and winter. To borrow an overused term from the COVID phrasebook these were ‘unprecedented conditions’ – some calling it the best east coast season in over a decade.

So we went surfing - cast aside COVID concerns to hunt waves, chase barrels and chew the fat at the only place we were allowed to – out the back between sets. We joined the Sco' Mo' surf team and bought so many surfboards, fins, and wetsuits that suppliers couldn’t keep up with the demand.

If our travel plans had been dashed we were determined to make the most of what was on offer on home soil. With no WSL to watch we embraced our own surfing agendas with renewed zeal and passion. And so despite the bleak context many of us have fond surfing memories of 2020. Some might even be so bold as to call it the best surfing year of their lives.

I certainly spent much of 2020 dipped in brine, trying to make sure my personal wave quota offered a positive counterpoint to daily updates on COVID case numbers. There were many cherished moments but, like many of you probably do, I have one moment that stands out.

While surfing was an unchallenged liberty on almost all of Australia’s coastal fringes in Sydney’s eastern beaches it was not.

In late March the Waverley council erected fences from Bondi to Bronte and issued a ban on surfing. For a month and a half, local surfers ducked and weaved their way through barricades and dodged cops on the beach - all for a few waves. The threat of a heavy fine loomed over every sea-going escapade. Bizarrely, surfing was made to feel like a kind of criminal act.

Things came to a head on Easter Sunday morning when a clean, five-foot south swell swung into Sydney’s beaches, fanned by an offshore breeze. Bondi was still off-limits but the council and cops had been enforcing a nine a.m curfew for surfing at Bronte and Tamarama. Basically, they were turning a blind eye to the early and then kicking everyone out, but when nine a.m rolled around on Easter Sunday there was still a pack of 20-30 defiant surfers in the water. The waves were good and without anyone really saying anything the collective decision had been made to stay out. Equipped with a new board, I was more eager than most to keep surfing and I was happy to be part of the saltwater protest. By this stage, people were allowed to roam freely in parks and all other beaches were open. There was a sense that an unfair double-standard was being applied to surfers in the east.

As the cops marched down the beach with megaphones in hand the pack maintained its solidarity. When the men in blue shouted ‘Surfers you must return to Shore’ we all developed a severe case of surfer’s ear and turned our attention to the five-foot set marching through. Eventually, the police turned and walked away, kicking at white sand in frustration with their shiny black boots. What could they do? Strip down and swim out? The war was won.

I found out later that the cops had implored the local lifeguards to herd us in on a jet- ski. However, the lifeguards - most of them surfers - were tired of being asked to play ‘policeman’ and refused to cooperate. 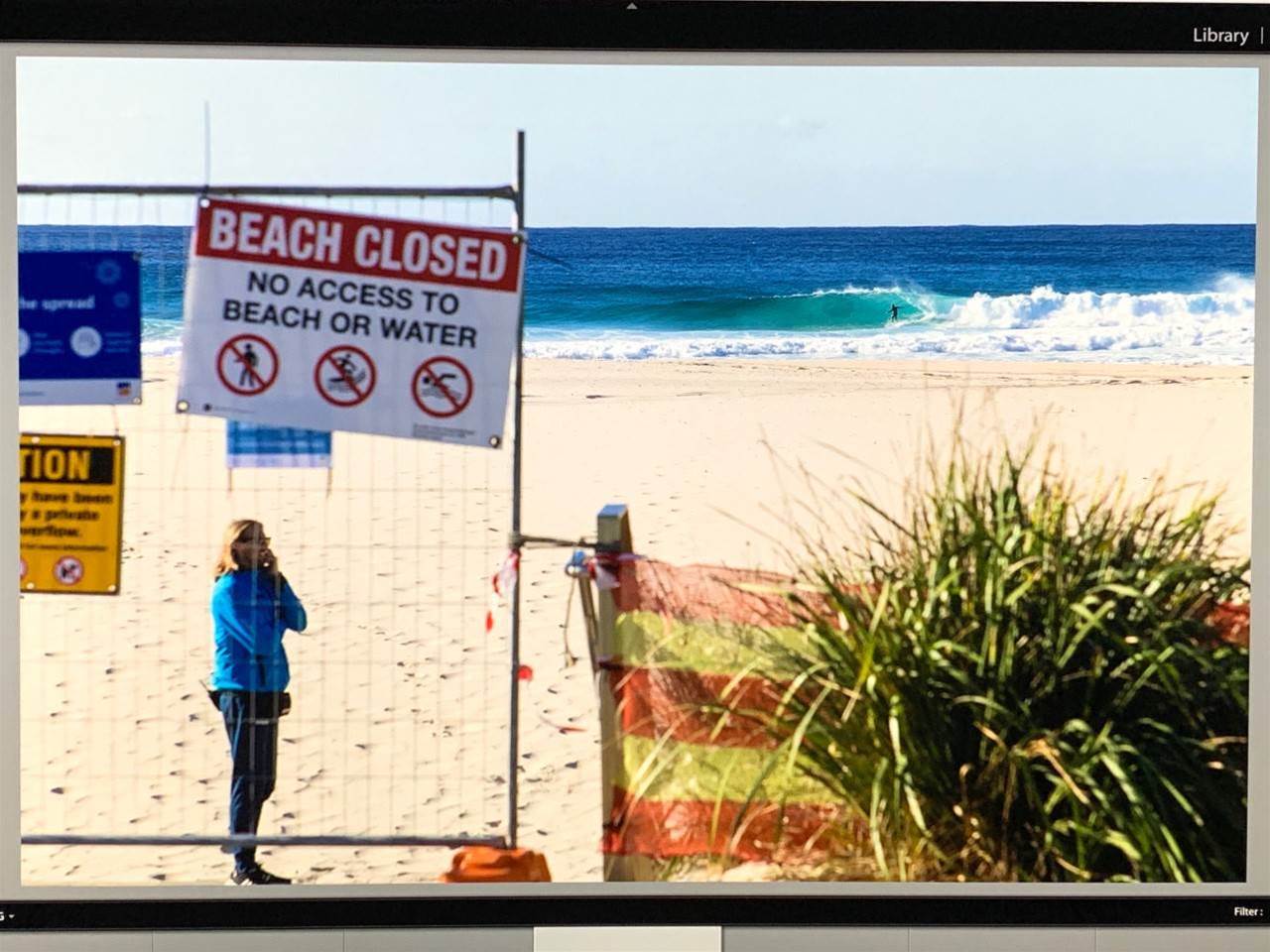 The author ignoring the fence and the heavy-duty COVID restrictions for a taste of freedom. Photo: Bill Morris

At some point during the session, I picked up a well-shaped wave that rifled into the small cove at Tamarama. As it was I drifted too far out on the shoulder to find the barrel, but my positioning couldn’t have been any more perfect to frame the photo that was being taken, unbeknownst to me, by veteran lensman Bill Morris. As I speared across the bay the frame captured the COVID fence and a Beach Closed sign in the foreground, with a blue-clad lifeguard on the sand. Beyond that was me, trimming a little wide of the barrel but having a good time on a classic autumn wall.

Forgive the self-indulgent anecdote and image, but when I saw the photo I felt like it summed up 2020 pretty well. While COVID threw a blanket of misery over everything we found solace in surfing and did whatever it took to be in the water.

Sadly this virus pays no attention to calendars or fireworks. It won’t disappear neatly because we have ticked over into 2021. We can only hope we’ve seen the last big wave of cases roll through in Oz.

At least most of us have a few good surfing memories from 2020 and if we’re lucky 2021 will be an even better year for waves.