A cheat sheet for cruising south of Sydney.

When everyone seems to be on a boat trip in the Mentawais or flying off to Fiji, here’s how to get away when you just haven’t got the time (or money). As I was in this exact position, I had Sydney as my starting point and one day to work with - time enough to head South.

If your Instagram is anything like mine, and it’s saturated with cheesy van-life pics - rolling homes with wanderlust stickers on the back - you may think the whole fuss is overrated. You may be right, but oh boy does a kitted-out vehicle make a road trip that much better. On this trip we had one of the best, an old Troopy with all the essential add-ons. There was a bed in the back of course, perfect for a mid-afternoon doze or spontaneous camping, a little fridge inside for snacks and a spontaneous beer (a hungry road trip falls on to my list of least favourite things), and there was room for a small quiver of boards strung up inside for spontaneous waves. Whilst comforts like these definitely made my experience, if you don’t have it, there’s nothing wrong with strapping a couple of boards to the top of your hatchback and heading off. Driving south, we breezed on through the centre of Sydney and out past Cronulla so we could at least say we left the city. Reflecting back on the spots we ventured, I realised that places which can make you feel worlds away from your usual humdrum are as little as an hour away. We drove through the Royal National Park early in the morning, with the light just breaking through the tunnel of trees, which was a sight in itself. Further along, we cruised over the sea cliff bridge which gave an ethereal feeling of floating high above the water, with an uninterrupted view of the horizon. If you’re following the same path, there’s a lookout on Stanwell Tops where you can pause and appreciate the sight, and being there early you’ll miss the bus loads of tourists with the same idea (this can mar the image you had of yourself undertaking an adventure to unknown lands).

Soon enough, yawning and sleepy-eyed, we pulled into Thirroul and checked out Finbox Supply Co. It’s an independent surf shop where we discovered the much needed coffee we’d been yearning for since we left. Sustenance in hand, we nosed through the boards, playing with the thought of buying a new one - we were on holiday after all, even if it was only for a day. If you’ve found yourself here as well, now is your chance to pick up any supplies you’ve forgotten or give into said temptation and get that board. After our coffee, and quietly a pastry or two (still on holiday), we ventured out to Shellharbour for our first surf check at The Farm. Part of the Killalea National Park, and actually a national surfing reserve, The Farm and further on Mystics, really are picturesque white-sand beaches, and the best surfing we found on this trip. Parked high above the The Farm.

Post-surf we were salty, wet, a bit chafed and definitely hungry. A ten minute drive took us to Kiama where we were tempted to stop and fill our bellies, but with a venue in mind, we gave another ten minutes to reach Gerringong. There’s a cafe called The Perfect Break, and whether this refers to food or surf, either is fine. It was a delicious stop amidst an earth-friendly vibe, with keep cups for sale on the counter and mainly vegetarian meals on offer. Fuelled up, we walked lazily back to the Troopy and cruised down to Werri Beach. We parked on the hill above the point break, opened the back doors to the waves, and as we let our lunch settle, swapped between the languorous activities of snoozing, reading and watching the experienced and novice surfers rock off. The latter was an easy form of entertainment, joining in the chorus “ooo’s” and “awww’s” coming from the carpark choir with every jump.

Rested, we drove further on to Gerroa, where we found Seven Mile Beach. There was plenty on offer here, and if you can't find a wave on this massive stretch then there is little hope for you and your surfing career. Other times, from here I’ve ventured into nearby Berry for dinner, where you can grab a drink at the Berry Hotel and observe the curious phenomenon of the surf-cross-farm kid, which is an interesting clash of coast and country. On this trip, we decided to break up the return drive and head back to Thirroul, where we found the last table at Jose Jones. As funky as it sounds, it’s a little restaurant that seems to have sprouted up in the middle of a drive-in motel. Beach-side views from the carpark lookout.

Now we were very full, as always having overestimated the amount of energy one needs to sit still in a car, and so we waddled next door to an antique store of sorts. It’s one of those shops whose contents spreads through several rooms, hangs from the ceiling and spills outside. Fittingly, it’s called Wombat and we burrowed through the junk to find some gems - a dusty super 8 camera and a shirt that was reminiscent of the 70s (but hopefully not of the era). We noticed some collectible boards hiding in the corners, but slave to the holes in our pockets, we decided only to make note of the place to check on from time to time in case a board of value does find its way there.

By now the sun was setting, and so we dragged our feet back to the truck and prepared to head back to the real world, where work prevails, for now, over our true existence as the ultimate travelling, live-to-be-free, soul-surfers… Watch: One of the South Coast’s Heaviest Waves Just Woke From its Summer Slumber 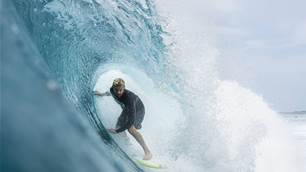