Including the return of vintage Kelly Slater.

John John won’t be beaten until the finals

We knew John John would shake his form slump at Margies. WA is comparable to the power of the North Shore and John John has spent plenty of time in the West this season. In March he was in town filming for his latest movie project with fellow Hawaiian (and OG) Bruce Irons. Since landing in Margaret River he has barely broken a sweat and if the forecast holds true we doubt that no one bar Kelly will come close to rattling the young gun’s cage.

When the swell is up Seabass is biting

It would be unfair to say Sebastian Zietz has failed to so far reach his potential. The Kauaian has consistently lost close heats, often to his countryman, John John Florence. The majority of his results have also come on home soil. In 2014 he had fourth place finish at the Volcom Pipe Pro, a third at the Vans World Cup of Surfing at Sunset Beach and has consistently been in the running for the Triple Crown. At The Box he has looked on song for a bankable result. Today he outsmarted Parko. The tour veteran allowed Seabass to pounce on a sneaker-set, hoping for something better on the horizon. Joel pulled back, admitting in the post heat interview that it was a fateful mistake. Zietz then added a 7.23 to his heat total and took one back from the Australian, moving into the next round.

Jay Davies created more headlines today disposing of current ratings leader and three-time world champion, Mick Fanning, in a barrel shootout that was built up as a title fight. Yesterday he KO’d world champion Gabriel Medina and was celebrated as a hometown hero. Today he became a legend.

"That was just so fun, every bit of it," said Davies. "On that wave I just really had to forget about all the other heats I've surfed out here where I've pulled back and put my head down. It was the steepest take off and I just wanted to give it everything I had. I thought I was going to come off but luckily I didn't."

We’ve seen countless wipeouts during the Margaret River Pro but none have been more skitz than Adam Melling’s mauling during his round 3 heat against John John Florence. Mello fell from the heavens and took a bone rattling beating that would break the most hardened of souls. He shook it off and showed plenty of ticker continuing to charge hard to the bitter end.

We saw the return of vintage Kelly Slater

This afternoon Kelly paddled out to Margies Mainbreak on a faithful Al Merrick 6’3’ bat-tail and reminded us why he is the greatest of all time. After opening the heat with a 9.50 with a series of searing carves that finished with a stab under the lip, we knew he was on. However the critical point of the heat came on his third wave. Shuffling under the curtain and into one of the biggest barrels of the event he came flying out and swooped hard off the bottom and into a classic forehand wrap that sent shivers up our spine. The reward, a perfect 10. It was vintage Kelly Slater. The tenacity, the seamless transitions through turns and a confidence that has so far gone missing this year. With that effort he locked in the highest heat total of the event, a 19.50 and put everyone on notice. As we said at Bells, Kelly experienced a similar start to his 2005 season and managed to finish the year with his seventh world title. With Mick out and Filipe faltering, he looks destined to draw an in form Adriano in quarters and face John John in the final if the Gods have their way.

Watch all the heats on demand here.

Tune in to live action here. 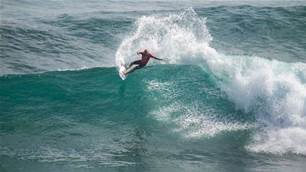 5 Things We Learnt Today at the Margaret River Pro