Qualifying might be tough but for some holding on is even harder.

Kelly Slater was once a rookie. As was Tom Carrol, Tom Curren and Mick Fanning. Strange isn’t it? To get to the pinnacle of the sport is a journey, and one of the stops along the way is the rookie year.

A rookie on tour may be an easy target for the experienced competitor, but a rookie on tour is there for a reason: he knows how to surf real good, and he knows how to surf heats. If you make it onto the World Championship Tour, to state the obvious, it means that you know how to throw that 5’ 9” around in a way that pleases the judges. All top 32 surfers are talented beyond belief.

Some rookies come on tour and stick around for a decade or more, while others pop onto the tour however, have a total good time, harvest the party babes, and are quietly gone the next year, to slip away into obscurity, or a token industry job. Sometimes the same thing.

This year we have five new faces, ready to take on the world. There’s a good mix of new blood, with some very hungry faces keen on slaughtering the old guard. Before we discuss them, let’s look into the rearview mirror at how some of the previous rookies have fared.

JDub has been around ever since, with some big moments under his belt, like winning the 2012 Rip Curl Pro Portugal, and the 2014 Billabong Pipe Masters. He had an average competitive year otherwise in 2014, but is set to continue on the elite World Tour this year. He did also win the 2011 Rookie Of The Year award.  Alejo has been a journeyman, and stuck around ever since his rookie year as well, but did not make the cut for 2015.

John John Florence won the Rookie Of The Year award, and has gone on to be one of the most influential surfers of his generation. He won the Billabong Pro Rio in his rookie year as well. Not to be outdone though, Gabriel Medina got two seconds in his rookie year, and went on to be the 2014 world champion. Yadin and Willian dropped off, while Miquel and Kolohe are solid stock on the 2015 rankings. John John, Gabriel and Kolohe are set to establish themselves as the nucleus of the new gang, as the likes of Kelly, Joel, Mick and Taj ponder their future.

This was another impressive group of rookies, with all of these surfers still on the tour for the 2015 season. Nat Young got two seconds, and won the Rookie Of The Year award. Glen Hall has been slipping in through a hellish backdoor, after being plagued with injuries after fracturing three vertebrae whilst competing in Fiji. He filled a replacement position in 2014, and has an injury wild card for this year. Felipe Toledo is leading the way with his smorgasbord of new airs, while SeaBass is one of the funniest dudes on the world tour. Not discounting the fact that he won the Vans Triple Crown along the way.

Dion Atkinson won the Rookie Of The Year award. But didn’t qualify for the 2015 series. Yes, it is pretty weird, the first time this has happened in recent pro history. Neither of the two rookies actually requalified after some below average performances, as well as some bad luck combining with their inexperience, saw them sent packing. In a recent interview on Surfline.com, Dion was open about his failings. “On the ‘QS, you might make an error and the other guy might be more of a rookie, and make an error straight behind you, and you’d be back in,” said Atkinson. “But on the WCT, as soon as you let your guard down, you’re knocked out.”

It’s a mixed bunch, with one Australian, one New Zealander and one Hawaiian joining the two Brazilians. All come with their very special skill sets and all are frothing to set the surfing world alight. We think that Ricardo has oodles of drive and determination, along with talent aplenty. He’s going to be around for a few years. The other surfer who is set to latch onto the World Tour and not let go is Wiggoly Dantes. Ever since he won the Quiksilver King Of The Groms in France in 2005 with a bunch of airs and tens, Wiggoly has been bubbling under and set to make his mark. Now that he has established himself, he’s going to hang on tight.

Keanu and Matt are two surfers who could go either way – they could kill it on the world tour, or the world tour could kill them. As talented as any one of their peers, they both will face the challenge of adjusting to life on the World Tour. If they pull it off, they too could be around for a decade or two.

Italo Ferreira is something of a dark horse, but this powerful and short (5’6”) goofy footer could do some big hacks and follow in the footsteps of young Gabby, which is a very god path to take. 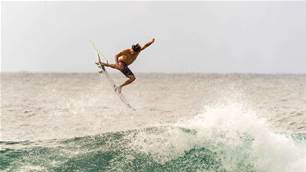 A Brief History of the CT Rookie