Australian big wave documentarian Tim Bonython has been filming The Right in Australia for over a decade. One of the world’s heaviest, scariest, most messed up waves, he just put all of the carnage together in an aptly titled new edit called “Terror Vault.”

“The thing with the Right is that every wipeout has a story,” Bonython told Tracks. “And if you surf there you eventually will go down. That’s part and parcel of surfing there. It's nowhere near a perfect wave.” After ten minutes of this car-crash viewing you’ll be inclined to agree. The wave is located a mile or so off the remote south-west coast of Western Australia. In the deep ocean a small button of a reef gets in the way of the powerful Indian Ocean swells that frequently blast this section of the raw coast. “There is so much water hitting such a small shallow reef. It’s like the whole ocean just folds in on itself,” explained Ryan Hipwood. “It’s not really a wave and more like a Flow Rider wave, just one that is 20-feet tall. So the consequences when you fall off are higher than any other wave I’ve surfed.”
Unlike other big-wave slabs like Teahupoo or Shipsterns, the deepwater nature of the break adds extra peril. When a surfer falls they are pushed over the shallow reef and then deep down below the surface. Two-wave hold downs are common, as are burst eardrums from the pressure. And we haven’t even mentioned the great white sharks that call this stretch their home. Yet obviously surfers are always willing to manage the risk at The Right to receive the reward. While this latest clip shows at least two dozen mini car crashes, there are also some spectacular makes. West Australian Kerby Brown’s monster on his backhand at the five-minute mark is probably the pick.“It’s such a hard wave to read. You never know just how to deep to go,” Brown Tracks not long after he survived the ordeal. “Then throw in the unpredictability of the wave. Surfing The Right is a bit like playing Russian roulette. On that one, I dodged the bullet.” 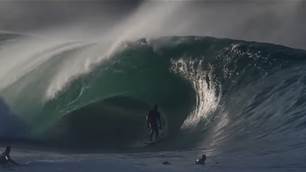 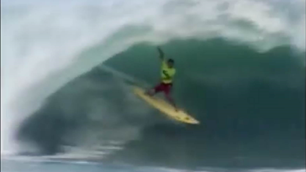