Thankfully the big wave award winner was spotted by Larry Haynes and resuscitated by Mark Healy.

Last week Tracks reported that a huge swell was being forecast for Fiji. Today brings news that Hawaiian hellman Aaron Gold, who took out the award for the biggest wave paddled into at the 2016 WSL Big Wave Awards, nearly drowned this morning at Cloudbreak.

According to Surfline: ‘Gold took off on wave, wiped out, got washed inside and was floating facedown in the water when a jet ski driven by Larry Haynes swooped in to retrieve him. Aaron was lifeless and foaming at the mouth when the rescue team pulled him into a boat anchored in the channel. They immediately administered intensive CPR.’ From incoming reports this was begun by Mark Healey.

The report goes on to state that after coming to, Gold was taken back to Tavarua Island where he was administered oxygen and was awaiting transportation to the mainland to see a doctor. It also states that thankfully he looks to be okay.

Instagram is currently flooded with tributes and well wishes to Gold and his family, as well as photos and updates from the Cloudbreak line-up as the swell bears down.

Surfing Magazine’s Instagram profile, theroadsoda, posted that at 9am local time no one had re-entered the line-up after Gold’s wipeout, but that the waves were starting to clean up and could start pumping soon. Since then they’ve reported that a sizeable crew has taken to the break, with a host of usual suspects among them, including Nathan Florence, Mark Healey, Jamie Sterling, Koa Rothman, and 2x Cloudbreak champion, Damien Hobgood.

Further social media updates indicate that the waves are around fifteen foot at present, a little slow coming in, but that there are some crazy ones hitting the ledge from time to time.

With UK forecaster Magicseaweed suggesting last week that the waves could peak at even bigger sizes than the mammoth swells that hit Cloudbreak in 2011 and 2012, it’ll be interesting to see what transpires throughout the day. In any case it seems like an appropriate crew of crazies are once again on hand to tackle whatever the ocean throws at them. Let’s just hope that Gold’s early morning incident is the only one of its kind for the day and everyone stays safe. 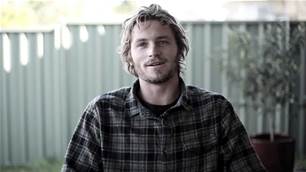