It was a fairly ugly-looking ocean out there. Big boy Jordy was on borrowed equipment in the surging conditions in the final heat of the round of 32, and it looked good underfoot. “It’s a borrowed board,” said Jordy. “I thought I’d get ahead of the curve and shipped all my equipment to Margaret River, and then Bells turned on.”

Up against Leo Fioravanti, both surfers were struggling to find clean faces, with both of them banking a single good score each, but struggling to find the solid back ups. The heat went to Jordy. “It’s all about finding the good ones, more than anything else,” said Jordy. “In my next heat I’ll just be on wave selection, that’s what is going to win heats.”

Slater got bounced out the back by some big sets in his heat against Peterson Crisanto. “I nearly didn’t get out,” said Slater. “Then a massive set came through and I had to bail out and dive deep. Two or three on the head got the heat started. It was so hard out there.”

Peterson Crisanto didn’t really have much in the tank against a very rejuvenated Slater, who swapped out his Greg Webber mid-heat, jumping onto a 6’0 Simon Anderson thruster for his last few waves. “I had the wrong wax on both my boards,” Slater lamented afterwards, but he is into the quarterfinals, and is stoked.

The forecast shows plenty of swell for tomorrow, clean offshore winds and low tide for most of the day. It will be absolutely no surprise if Kelly comes out on top, even winning the whole damn thing. He’ll come up against Ryan Callinan in the quarters.

Talking of which, the goofy-footer showed confidence out there in the big right-handers, with fellow Newcastle surfer and beach commentator, Luke Egan, comparing it to Third Reef Mereweather. Callinan picked up one bomb and calmly hooked it three times, including a massive closeout backhand whitewater bank for a score of 8.6 “Yeah it’s a bit like Mereweather,” said Callinan after the heat. “I felt comfortable out there.”

It was refreshing to see Toledo turn on his game-face in his heat against rookie Seth Moniz. Filipe knew what he needed to do, and surfed a good heat, with tight finishes, to get what he needed to win the match-up. A huge flyaway wipeout in the shore break might have rattled Seth’s brain a little, but the momentum of the heat never shifted his way.

Then Medina redefined what the hell was going on out there. It took him about 5 minutes to totally go to town, do bigger turns, go more critical, smash the lip, push the envelope further by taking one or two crashing wipeouts and just generally go into full-tilt warrior-mode and change the game completely.

It did look like he had been doing some homework, and his new quiver of thicker boards and fuller rails combined with a kind of retro-Occy’-esque extended bottom turns, turned him into a relentless machine. A 9.00 and an 8.27 for two absolute bombs saw him stand out as the best surfer of the day thus far. It was a clear signal of his intentions at this event. Cardoso had no chance.

In comparison, Owen Wright looked like he was motivated and strong, and looked smooth and comfortable against John John. Until he fumbled a board change (no wax on his backup, lots of shouting…), and John John figured out that the judges were simply looking for total commitment on the inside section. John’s first inside commitment was a single move closeout bash for a score of 7.83, soon followed up by similar waves to bank a 9.63 and a back up 8.53. At a hefty 18.16, it was the highest heat score of the day from John.

“It so hard to make,” said John John of the conditions. “That last section, you know it’s coming but you don't know if there’s a warble a double up or a boil, and you end up right next to getting washed over to Winkipop.”

Talking of Winkipop, after one huge wipeout on the end section we lost Italo around the corner as he got washed over The Button and headed down the point via some very dangerous reef. There were some stressful moments before he was picked up unscathed and headed back out.

“I was so close to the rocks and then I was walking on the rocks, and then I saw the ski, and jumped back in, and then I couldn't see the ski, and it was a crazy moment,” said a very croaky and humbled, but victorious Ferriera. “On the last one the board hit my face, and it was just crazy. I just need to relax now, and think about tomorrow.”

His opponent Jeremy Flores also had a horror board change, with no fresh ride waiting for him on the beach, he needed to sprint up the stairs. He did not look happy at all. On a day with board-munching waves, at this level of competition, and given modern standards of professionalism, this stuff shouldn't happen.

Jordy added to the drama by having a leash pull through his board in the last heat of the day. Adding insult to injury he was flung off the back of the ski on the inside. Soon after, Jordy got a massive bomb. He found an easy chip-shot on a set wave, carved the southern ocean lump like it was giant Sunset Beach wall and managed a huge final turn for a score of 6.77 – enough for the win over Kanoa Igarashi.

Towards the end he took a giant set on the head, way out back, and lost his board, but it didn't affect the outcome. Igarashi was overpowered by both the giant sets and by the big Smith, and Jordy charged forward to the quarterfinals tomorrow where he will come up against Italo Ferriera.

Ok, we can breathe again.

See the remainder of the quarter-final match ups below. John John Vs Medina could be one of the best heats of the modern era if conditions clean-up and both surfers hold form.

In the womens' quarters Lakey Peterson inched past Coco Ho and the ultra-confident Caroline Marks continued her world title crusade. Meanwhile former Bells champ, Courtney Conlogue, over-powered Carissa Moore and Malia Manuel upset Steph Gilmore with precise rail surfing. Of the four semi-finalists Manuel is the only one yet to win a WCT event, but big clean Bells may offer her a prime opportunity to change all that. 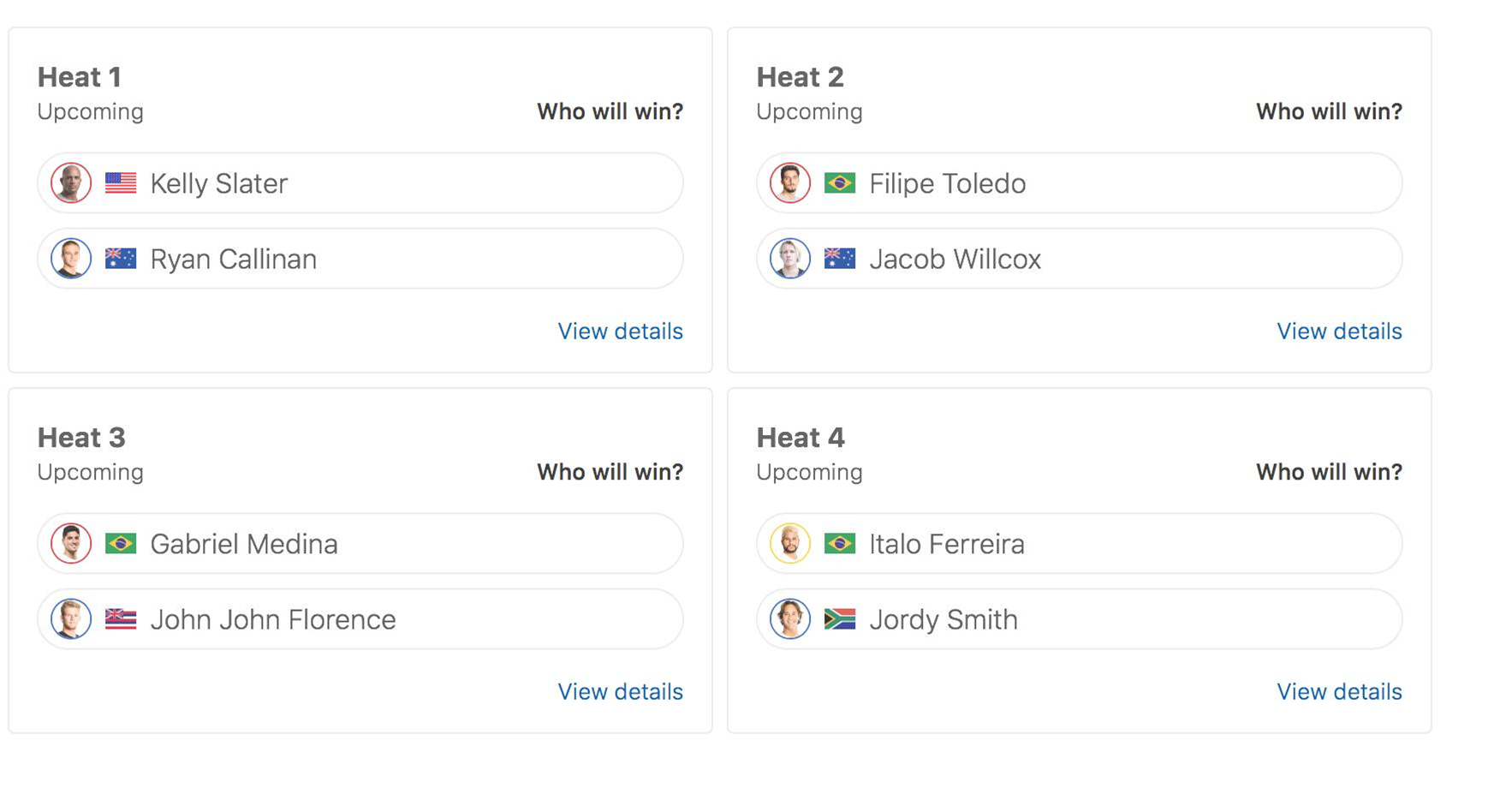