Claiming a cover shot of Tracks is a real trophy for surfers – a moment in time crystallized beneath an iconic masthead. The surfer is immortalised, forever part of a bigger history than simply their own.

However, the prestige and buzz associated with scoring a ‘P1’ is a shared prize – it belongs as much to the photographer as it does the surfer.

Below photographer Spencer Hornby details the drama behind his first cover shot for Tracks. 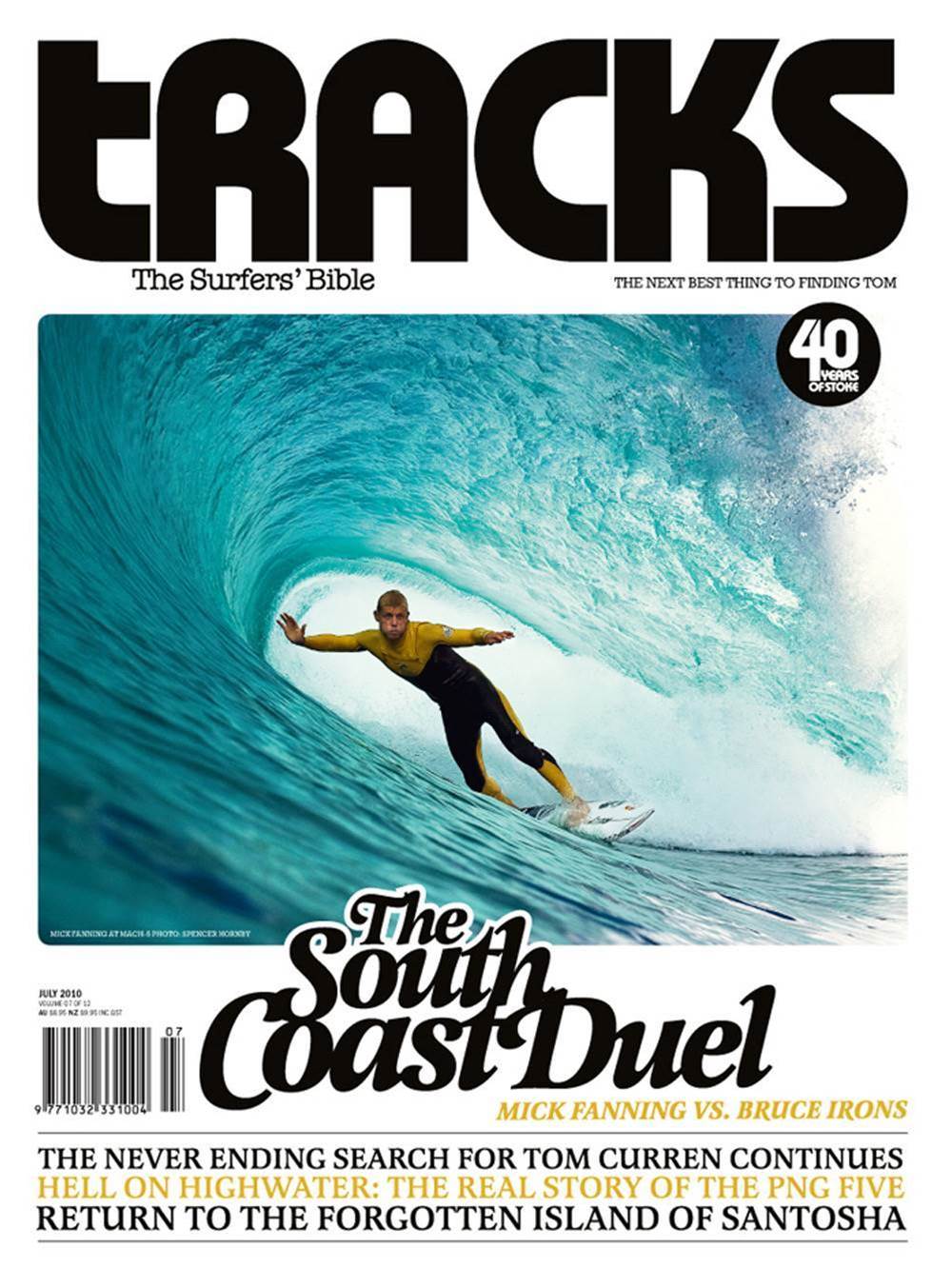 This day was an absolute blast, and something I will always be glad that I was a part of. It was winter of 2010 and the East Coast was getting smashed with its annual bombardment of swell.

This particular forecast had raised some eyebrows due to its sheer size and the promise of good winds to accompany it. Initially, it looked like it was going to be a crazy day at OURS, so Koby Abberton had his boy, Bruce Irons fly in all the way from Hawaii. I’d heard through the grapevine that Mick Fanning was going to jump on a plane too and head down from the Gold Coast and join the fun. It was all set, all’s you had to do was be there.

When I turned up at Ours, it was absolutely huge. When you drive down the dirt track there towards the carpark at the bottom you get your first real look at what the ocean is doing. I remember saying to myself, “Holy shit this is gonna get wild”. As I parked my car and fiddled around with some camera gear and waited for the crew to start turning up, I glanced over at the lineup and kind of noticed it was a bit south. Ours likes a predominately, straight east direction. I didn’t think too much of it, probably because I had so much hope for it all to fall into place.

As the crew turned up and the crowds filled in, an hour went by and nobody was even in the water yet. That aint a good sign when you are a photographer. The wind was starting to swirl and the waves were basically a straight south. It had changed. I looked around and Koby was making phone calls, people were starting to wonder what the fuck we do now and it was a bit of a shitshow really. Just then one of the other photographers, Andrew ’Shorty’ Buckley, who was with Mick and helped this entire thing come together, fielded a phone call saying that a certain wave down on the south coast was going bananas. And just like that everyone had packed their shit, necked their coffees and were on the road.

"I was driving an old V8 ute at the time and I remember turning around to see Bruce Irons shoving his boards into the back of it and walking off."

I was driving an old V8 ute at the time and I remember turning around to see Bruce Irons shoving his boards into the back of it and walking off. Koby looked at me and said, “Go straight there and don’t get fucking lost”. So, after forty-five minutes or so of getting lost on my way down there, I finally reached this place and it was absolute mayhem. The crowds were as big as the surf and it was about to get absolutely cooked by about 20 more of our crew. I wasted little time getting my camera gear together and hitting the water. This wasn’t going to be another false start.

The first 45 minutes went by without anything particularly eventful. Mick and Bruce were kind of just feeling things out with a couple of little ones on the inside here and there. Koby was getting his percentage of the cut too.

I noticed Mick had paddled past everyone and Bruce kind of chasing him. It looked like these two were having a sneaky little duel and just as this happened what I’d call the set of the day, and a wave I will always look back on with fond memories, appeared and Mick made his presence very known as he swung into it. I’ve been in the water many times with Mick and I have to say this was the fastest I’ve personally ever seen him surf.

Bruce got the next wave, it wasn’t as down the line as Mick’s but it was still an absolute stonker. Those two were having a blast and yelling back and forth at each other as they paddled back out.

After the session came to a close, I drove back to my house further north on the Central Coast and just sat in silence for a couple of hours at the wheel. No radio, no calls, nothing. I just sat there and drove, thinking to myself, what a fucking amazing day I just had in the water and how lucky I was to be a part of it. I ended up scoring my first surf cover of Tracks for that wave of Mick’s, and it was truly something that kicked things off for me.

Mick Fanning on the cover of the Tracks 50th anniversary issue, which also features a timeless, fold-out cover. On sale now.