Jesse Little brings Hawaii to your small screen in a year when access was denied.

Unless you had CT credentials or connections then talking your way into Hawaii this season was a major challenge. Australian filmer, Jesse Little, was able to hustle some North Shore time by registering as Wade Carmichael’s coach. Jesse has been spending most of his time behind the lens, but if Wade’s Sunset clips are anything to go by then he has certainly been doing a dam fine job as a ‘coach’. Unfortunately, the Sunset CT was canceled earlier this week – another victim of COVID – and we won’t get the chance to see Wade unleash his forehand fury on a wave that seems custom made for his brand of power surfing. We spoke to Jesse (who also filmed this year's Tracks Ride Guide) about his North Shore season just before the call was made to can Sunset.

Does it have a different feel to a typical Hawaiian year? Are the crowds down?
It’s been about 5 years since I was last here. I thought it was going to be super quiet but it’s been pretty busy. Vibes definitely a bit different. I guess its just the whole Covid thing is still going on so.
Is the pro surfing fraternity well received or is there a little bit of animosity or negativity because of the COVID situation?
We’ve been kinda cruising in our own little bubble the whole time. But I can imagine there would be some negativity towards the whole thing with the CEO getting Covid etc.

Can you move around freely or has the WSL imposed special restrictions on anyone connected to the surfers?
Yeah, they’ve imposed a few restrictions on them. A few activities aren’t allowed. Surfing and cards are allowed though haha.


There are some big players based on the North Shore and they all have youtube channels- Koa Rothman, Mason Ho, Jamie O’Brien, Nathan Florence, Koa Smith, and others. Does it feel like they are all in competition? Like TV shows chasing the best ratings.
Haha I dunno I don’t really watch many of them but there are a lot based here for sure. I saw Koa Smith paddle out Pipe with a waterproof mic on, haha.

Is John John operating on a different level in free surfs?
I've only seen him a few times but when I have he’s definitely a stand-out every time.

What’s the craziest/ best thing you have seen this Winter in the water?
It’d have to be just some of the wave ridden at Pipe. There’s been a heap of pretty insane ones. Seth Moniz, Nathan Florence, John, Griffin, and Crosby (Colapinto)  they’ve all had some pretty good ones. I’m sure there are a few Wave of The Winter  (WOTW) entries.

Anything wild you have witnessed on land?
Jeez, I dunno. The trucks they drive over here are pretty outrageous haha

Is it a buzz to film on the North Shore? Do you thrive on the constant energy? The non-stop surf focus?
Yeah, I love it. There is so much talent here. Always makes shooting enjoyable when you’ve got the world’s best in some of the of the world’s best waves.

Do you have to work hard to get different angles? How do you decide where or who you will shoot?
I’m over here with Wade Carmichael. So I’ve just been filming him and then whoever else is out there at the same time. I feel like this place has been shot so much it's hard to get new angles. Every time I’ve walked somewhere else to get a shot someone else is already there.

How else are you killing time?
We’ve been playing a ridiculous amount of cards.

Best beer in Hawaii? Best food or grindz as the Hawaiians call it?

I’d have to say Big Wave has gotta be the best beer. And I’ve been frothing on the Poke Bowls from Kahuku Superette. 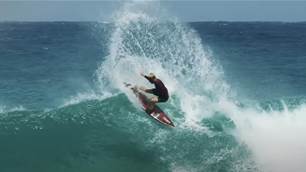