The nominees in three of the most popular categories of the 2013 Billabong XXL Global Big Wave Awards presented by Pacifico have been revealed. 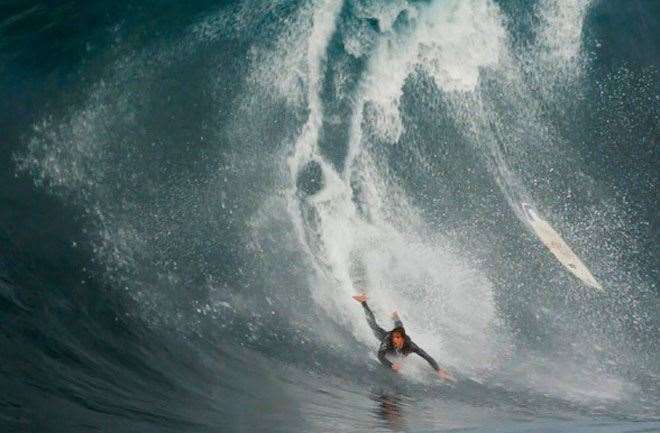 NEWPORT BEACH, CA - The nominees in three of the most popular categories of the 2013 Billabong XXL Global Big Wave Awards presented by Pacifico have just been revealed, adding to the momentum as the gala awards show approaches for big wave surfing's greatest annual event on May 3. The top finalists for the Wipeout of the Year, the Surfline Best Overall Performance (male) and Billabong Girls Performance (female) awards can be viewed on the event website at www.BillabongXXL.com, and ballots are about to go out to the surfing world's top athletes, photographers and journalists this week to determine the winners. The nominees have already been unveiled for the Ride of the Year, XXL Biggest Wave, Pacifico Paddle and Pacifico Tube divisions, representing over $120,000 in prizes for the surfer and photographer winners.

In contention for the famed XXL Wipeout of the Year honors are five surfers at four notorious big wave breaks sprinkled around the world. Heading up the candidates for 2013 are the only two Australians to garner nominations this year: Brett Burcher of Ulladulla, New South Wales and Chris Shanahan of Denmark, Western Australia. Both suffered horrendous missteps at a viciously shallow break in West Oz known simply as "The Right" and both were captured by videographer Darren McCagh. Also being acknowledged among "the best of the worst" are: Joao De Macedo, who launched into space at Maverick's in Northern California; Tom Dosland for skimming on his back down the face of a huge wave at Jaws, Hawaii; and Axi Muniain for an aquatic reverse-somersault at Nazaré, Portugal.

For the first time ever, the surfing public will be able to have their opinion count in the selection of the winning wipeout by voting on Surfline.com. One third of the tally to determine the most spectacular unsuccessful ride of the year will be derived from the Surfline poll over the next three weeks, with the balance of scoring coming from the elite academy of surfing experts ala the Oscar voting process.

Also announced today are the nominees for both of the overall performance categories. According to the rules of the Billabong XXL Global Big Wave Awards, these divisions will be won by the "surfer who puts on the greatest number of outstanding performances at the most diverse number of venues over the course of the entire year." Generally regarded as the "world champion" award for year-round excellence, the nominees for the Surfline Best Overall Performance Award are Hawaiians Kohl Christensen, Shane Dorian and Mark Healey, along with Californian Greg Long and South African Grant "Twiggy" Baker.

The winners of all the categories of this year's event will be announced at the invitation-only Billabong XXL Big Wave Awards party at the Grove Theater in Anaheim, California on May 3, 2013. The show will be webcast that night on BillabongXXL.com and will be broadcast as a one-hour program on ESPN2 on Sunday, June 9 at 12 P.M. PT. This year's event marks the 13th-annual edition of the Billabong XXL Big Wave Awards, an event open to every qualified surfer at every break on every day of the year, so long as the action is captured by a video or still camera and submitted for judging by the XXL's voting academy of expert surfers and lensmen. Over 1,000 images were entered into the event before being filtered down to the definitive images of each nominated ride.

The final nominees for 2013, in alphabetical order: