Why the frequent flyer and former CT stand-out wants double or nothing.

Josh Kerr’s embrace of the twin fin faith has been one of the more intriguing career moves made by a former CT surfer. Somehow we didn’t really see it coming. While pros like Torren Martyn and Asher Pacey long ago ditched the back fin, Kerrsy was the kind of guy you couldn’t imagine riding anything but the most refined, high-performance shortboard as his mainstay. However, when Josh met Matt Parker from Album surfboards around four years ago something clicked. Kerrsy became an almost overnight twin fin convert and now rides them exclusively. Whether he’s launching dizzying rotations in wave pools or dialling in Indo loony tubes, Josh has, in a very short period of time, helped redefine the possibilities of twin fin surfing. Below he discusses his binary surfboard journey.

Tell us about the original connection you made with Matt Parker from Album surfboards.

About Four years ago Matt made me a twin fin that changed the game for me. That was when I was like ‘holy crap’ there’s a little bit of uncertainty sometimes between turns but just so much speed and you can still push as hard as you want. Every now and then I’d ridden a retro kind of twin to just glide down the line, but I couldn't yank it around and do whatever I wanted. However, the performance twin Matt made me definitely captivated me for sure.

How much fusion between a classic kind of twin and a modern shortboard is there on the boards you ride?

There's a lot of modern elements of rocker and stuff but the volume distribution has still got that retro kind of feel with a lot more volume upfront. A big one for myself was not going too wide on twin fins, or boards in general, because width just means less sensitivity. And I wanted something to be somewhat sensitive, but not overly sensitive at the same time. And that's kind of where the more volume through the board helps on that side of things – more volume all the way to the nose, flatter decks, more volume out to the rail, that kind of stuff. It's been a good few years now that I’ve been pretty damn addicted… … My surfing changed a lot because I could actually go out and hold drive and speed way further out from the pocket than I could on my regular thruster, which would create drag out there on that flatter part of the wave… I actually really enjoyed the whole open face surfing. Being able to utilise so much more of the wave, way out from the pocket.

You rode a twinny in the recent Boardriders Battle, competing for Snapper Rocks. Do you think if you were competing on tour now you would elect to ride a twinny in certain scenarios?

Bells, all day long and probably J'Bay too. There are so many waves it suited. And it's funny how much it actually smoothed out a lot of kinks in my surfing as well. By getting rid of unnecessary kind of chitter and chatter that high-performance shortboards can let you have in your surfing.

There's always going to be certain limitations to any board but in terms of your progressive approach, it seems like there's nothing that you can't do on your twin fin as well?

There's not. However, there is definitely a huge difference in timing and stuff like that because of how much more drive and projection I get off my bottom turns and how, if I want to get vertical in the lip how much deeper I have to go off the bottom. Timing on the twin fins definitely took a bit to kind of get used to, but to use areas of the wave that I’d never used before that was the exciting part, especially coming off tour. Just knowing that you're surfing for yourself and having fun. That was like creative freedom. That was so fun.

How actively are you involved in the design process with the boards that you are riding with Album?

Pretty highly involved for sure with Matt, and Nathan in Australia. I’m a bit of a thinker when it comes to that kind of stuff and I like blending all different styles of boards.

So, I guess it’s different to the tour where you are making changes to boards at like 1/16th of an inch. You can make more significant changes and go, 'what happens if I do this?' You can play Frankenstein with foam.

Totally and I'm pretty open to all that, from like a 4’9” fat biscuit to like a 6’8” mid-length. I’ve got ideas on every part of that whole range.

How does the decision-making process on what to ride work day-to-day?

I would say, really for me personally, it just comes down to motivation… What am I motivated to surf? Do I just want to trim and go fast or do I want to feel like I'm spicy and ripping around. Having that variety of board from a 4’9” to a 6’8” there’s a lot of different styles of surfing that you can do in a bunch of different types of waves, so it really comes down to what my motivation is. Sometimes you feel like chucking it around and getting flairy, sometimes you feel like just high-lining and trimming and doing big drawn-out cutties.

There was once a notion that twin fins don’t really work in bigger waves. What’s your perspective on that?

The boards I have, my goodness, they’re the best things ever in big, hollow pumping waves. I think that’s (saying they don’t work in bigger waves) relates to an old school way of thinking about it if you go back to that kind of retro kind of twin style – wider more desensitised, fins, maybe a bit too far forward and a bit too loose when you put down the back foot. The fin placement on the twins I’m riding has changed the game completely… I put my tail pads all the way to the back where the plug is and that's where I put my back foot. I don’t have that loose, friskiness unless I want it.

So, I guess in say a bottom turn you're laying over one big fin on rail so there is still a lot to kind of hold.

Oh absolutely … Personally for me there’s plenty and it’s almost more because it’s a longer fin and you’re still standing over your fin and it sits out a bit more than a smaller fin.

What are the biggest waves you’ve ridden your twin fin in?

Eight-to-eight foot plus. And I've ridden a couple of different kinds of boards. And I was even riding them at Pipe earlier in the year as well. I think that myth that they can’t be ridden in bigger waves can be tossed away. I remember when Anthony Tashnick was riding his twin fin rhino chasers when he was on his big wave charge too.

What about the stabilisers (small trailer fins) Is that something you to like to experiment with?

I don’t really play around with them anymore. I played around with it for a minute, until we figured out a better fin placement where I didn't need it… When you have a board that's built to be a twin fin there's definitely no need for a stabiliser.

Is your daughter, Sierra, riding them?

She likes to jump on my board or she's had a couple of mini twin fins and she loves it. But she’s pretty gung-ho about being on a thruster and having that control up in the pocket and trying to be the best surfer that she can be in the competitive realm.

With Album it seems that you are striving for the Holy Grail – to create a highly functional surfboard that also doubles as an aesthetically pleasing object?

Yeah exactly. Even just the aesthetic of the curves and lines or the shape. Then add a spray or a resin tint. And obviously, ensure that it performs as best as it can. That's kind of what we're trying to go with. The best guide is like Matt in the States, he's got a really good eye and is a graphic designer by trade as well. He’s been shaping for whatever – 20 years and has been on Album for 15. I think the best thing about him was that about the first 10,000 boards he did, every board was different; he never ever had a model. And then that's kind of what we've been working on these last three or four years – creating models and consumer kind of models because there's been so much interest around them. We’re making sure it's attainable for the general consumer out there.

So what's your go-to model now? What's your favourite one to ride?

Probably The Twinsman more than anything, but then again, I mean, not always… Ask me that on a different day and I’ll tell you something different.

For someone who has primarily ridden a thruster and wants to include a twin fin in their quiver, what would your advice be?

Do you ride a bit more volume than you would have with your performance thrusters? 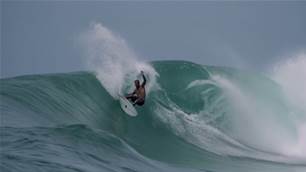 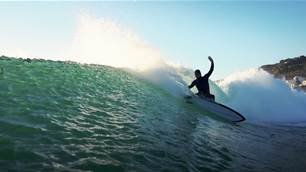 Watch: Josh Kerr get Wild South of the Border