John Florence is the world champion for the second consecutive year and the Hawaiian flag is flying at full mast. Florence is now also officially the most dominant surfer of the WSL era. For John John, it almost played out as a double-dip, dream scenario, but even if he didn’t get the Pipe Masters cherry, two titles puts him in an exclusive club; one imagines there are more to come.

After losing to Medina in round five Kelly Slater told the press he had “wanted to be an influence on the world title outcome.”  While Kelly couldn’t lay up the world title for John, Jeremy Flores in Raging Bull mode could. If you were gunning for a world title and looking for someone to eliminate the opposition on your behalf then a fired up Flores was a good pick as the hit man. Flores defeated Medina twice on the final day; claiming his scalp in round four and then delivering the crushing blow in their quarter-final match up. Perhaps Medina’s biggest mistake had been to make Jeremy angry. When Gabriel didn’t use his priority in their round four match-up and let a couple of sets roll through, Jeremy made it clear he wasn’t happy, pleading to the judges for a priority switch. He beat Medina and won the non-elimination round anyway. Jeremy was in typical shoot-from-the hip form, for his post-heat interview. “That’s me, I’ve been battling the system for so long and that’s my answer to it.” 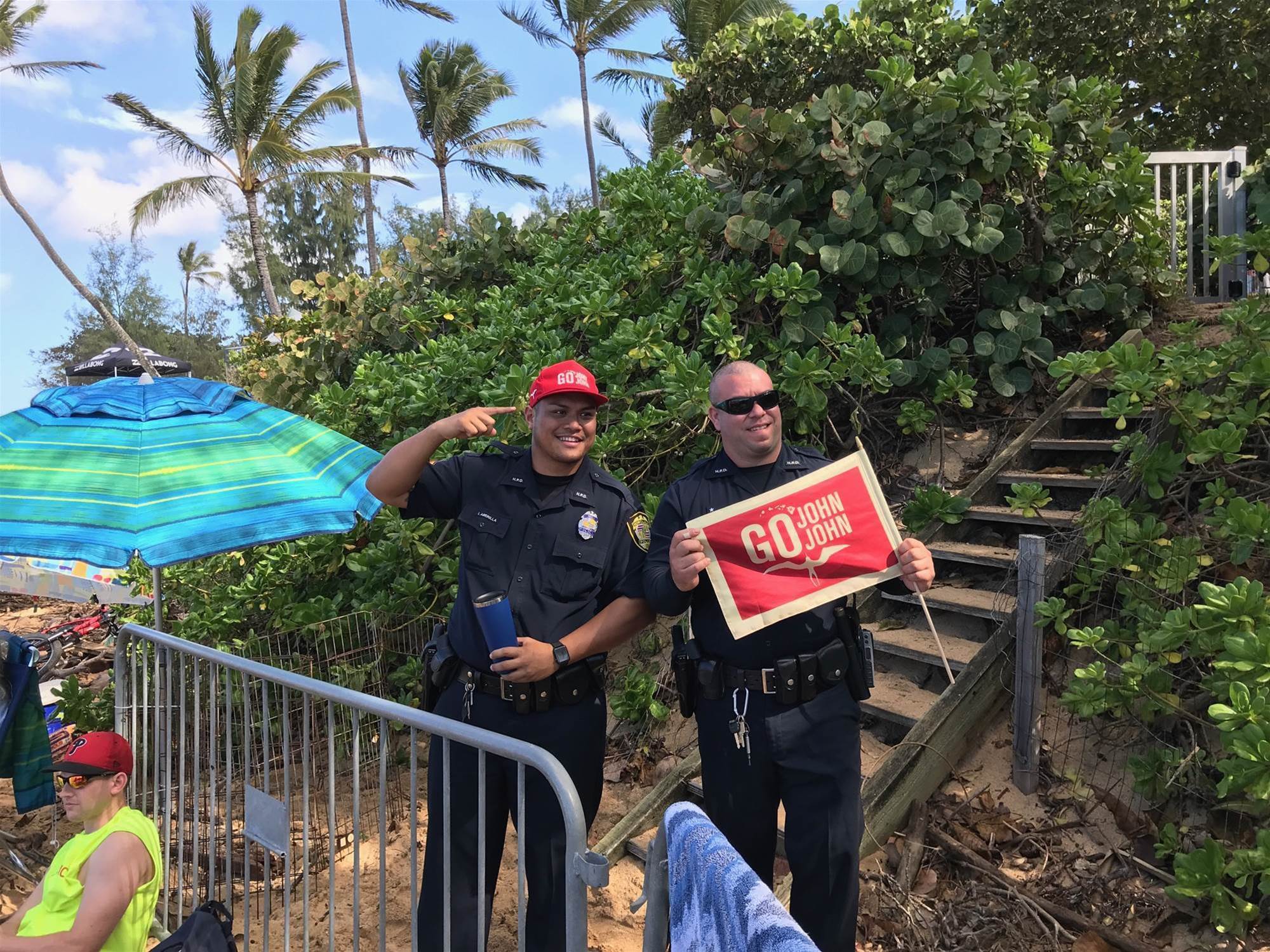 Even the local cops got caught up in the John John mania.

In round five Medina posted the highest heat total of the event (17.97) against Slater and looked to be hitting his straps at the right moment. His merciless execution of the priority rule – nearly taking Kelly out as he dropped in at backdoor – was a classic moment for those who love the argey bargey in pro surfing and also made it clear Gabriela was willing to do everything within his means to win. After the heat Medina stomped and scraped his feet anxiously as he waited for the WSL team to get their talking done and let him get back to business.

While it’s easy to focus on the favours done by Flores, for John John there were a couple of critical moments in the final day of his quest for title number two. In round four, Ciao Ibelli pushed him to the wall. When Ibelli found a vanilla milkshake drainer to claim the lead in the closing minutes most people expected a repeat of yesterday when Ethan Ewing was twice denied the jump on John John. This time, Ibelli got the score leaving John John in the hole with only four and half minutes on the clock. Needing a 5.37 John John dragged his cat limbs through a double barrel buzzer beater with little more than a minute to go to leapfrog to the quarters. Standing on the press-podium after the heat, John couldn’t help scream ‘Go Jeremy’ as Flores battled with Medina in the water.

John John’s other crucial move was to sell Julian Wilson a lemon in the opening stages of their quarter-final when there was no priority. It was just a small moment in a long day, but it allowed John to claim priority, the best wave of the heat, and set up a comfortable victory. His work was done. Wilson never showed up after that, posting a measly 2.64 against John John’s 17.60. Most expected the former Pipe master to offer more of a fight, but Wilson gave John John a pass.

While easily eclipsing Kelly, Gabriel never found a rhythm against a raging Jeremy in their quarter-final match up. As the heat drew closer to a result that would deliver John the world title, the crowd began to merge in the direction of the Johnson house (singer Jack Johnson’s boyhood home) where John John and his camp had posted up. While John was deep within his inner sanctum, his Mum watched the drama unfold from the edge of the yard, while wearing a wide-brimmed, green felt hat. 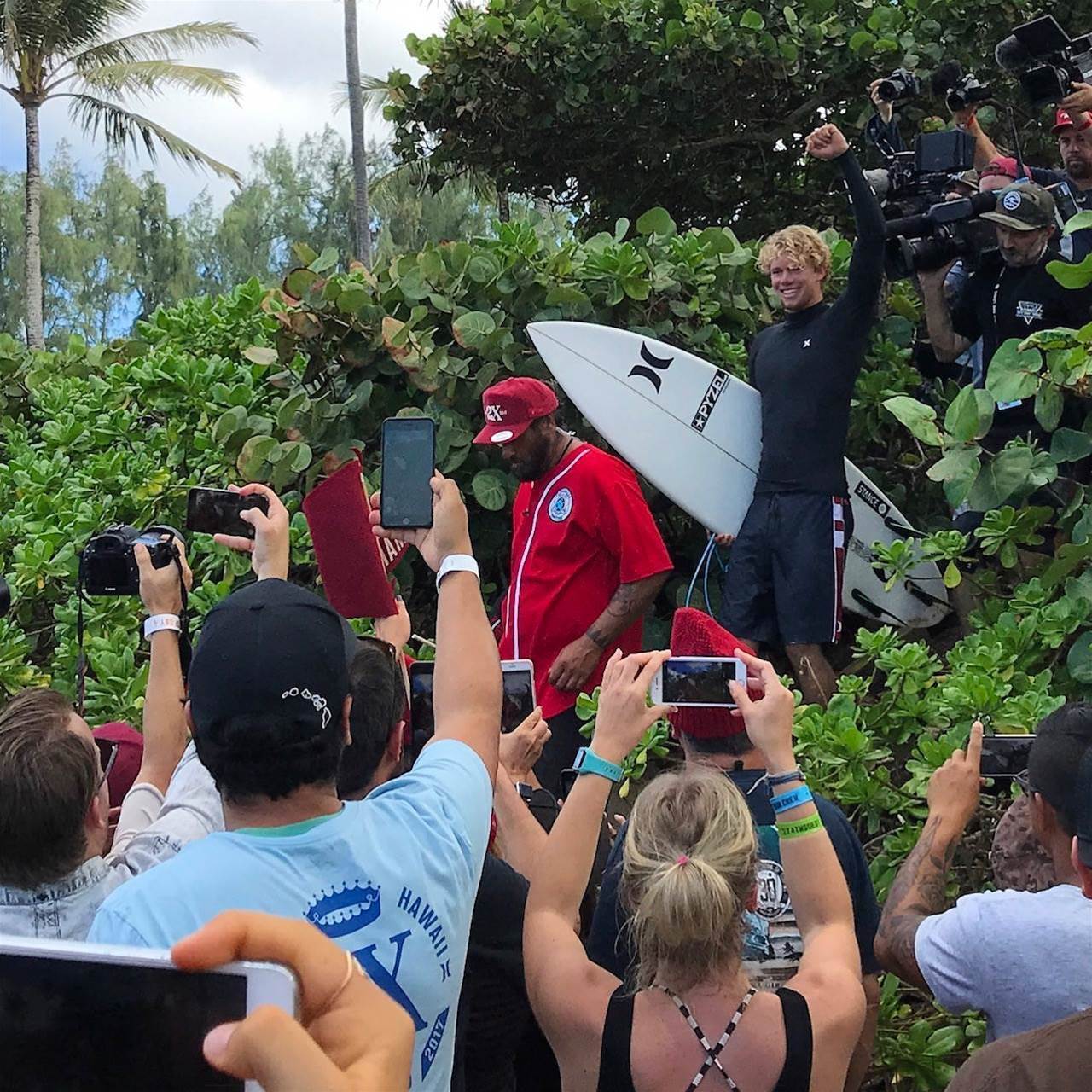 John John leaves the Johnson house backyard and raises his fist in victory before the adoring masses.

Meanwhile, half the school kids at nearby Sunset elementary had been given the afternoon off to cheer on their most famous former pupil. The ‘Go John John’ cries lifted a notch as the equation for Gabriel became increasingly impossible. When the siren sounded and the result was official the Johnson's backyard erupted and the crowd clambered over one another to get their hands on the merchandise being handed out by John’s marketing team. By the time John descended the stairs from the backyard, with his fist raised in victory, the beach was a sea of red banners and beanies. Even the Hawaii 5-0 cops who had been sent to help manage the crowd were kitted out in the ‘Go John John’ kit. To have their boy crowned world champ on Hawaiian shores was a major deal and everyone wanted to be part of the celebration.

After John’s clinching of the title, the rest of the day was perhaps defined by heartbreak and unexpected elation. For Ian Gouveia, John John’s 8.7 in the dying moments of their semi ended his chances at requalifying. Meanwhile, down the beach at Off The Wall, a shattered Gabriel Medina was channelling his disappointment into a wild expression session. He pulled a giant, frontside, back-flip at Off The Wall lefts (similar to the one he almost made in the heat against Josh Kerr yesterday) that had onlookers shaking their heads in disbelief.

Then after baking John John’s cake for him, Jeremy Flores licked the icing off before John John got to eat it. Florence had his world title, but had again been denied the Pipe Masters, and also the opportunity to claim both Pipe and the world title on the same day, in front of a home crowd. He may never get that chance again, given the proposed changes (due to kick in in 2019) to the WSL schedule, which have Pipe as the first event of the year and not the last.

For Flores, the tour’s eternal antagonist whose candid post-heat commentary has become somehow endearing amongst a wash of homogenized responses, it was a rare moment when the WSL seemed on his side.

In the dying moment the system he so often rails against had delivered him the high 8.22 (score came in at 8.33) score he needed to become a dual Pipe Masters champion. Afterwards, he even spoke honestly about his role in the world title machinations, suggesting he hated being the guy who influenced the result and that it really should have been decided directly between John John and Medina.

Courtesy of his Pipe performance Flores will be back on tour, fighting the establishment again next year, but 2017 belonged to John John. He only won one event, (an inspired victory at Margaret River), but few would dispute that he had done the best surfing in competition in 2017.

When receiving the trophy, John John seemed full of mixed feelings – exhausted after being hunted down by a menacing Gabriel Medina, elated with his world title and obviously a little disappointed not to have claimed the final prize. He reserved the biggest thankyou for his Mum. “… I really owe all this to my Mum because she took me and my brothers and I travelling when we were young … Thankyou Mum I wouldn’t be here without you.”

Meanwhile John John’s shaper, Jon Pyzel, summed it well when he was out at Rocky Point this afternoon celebrating like Hawaiians do – by going surfing. “It would have been so gnarly to come that close and not win.” As it is the North Shore night is alive with the sounds of John John celebrations. They may last the whole Hawaiian winter.