A surfer employs his art to make us think critically about the Australian male.

Artist, Billy Bain has spent the last year in the basement of his parent’s place at Avalon ‘plying his trade’ as he likes to call it. The result of his labours is an eclectic collection of sculptures and paintings, which are being showcased in his first, solo exhibition. Titled ‘Blokes’ the exhibition puts the Australian male in a clay mold and examines the interplay between mainstream masculine stereotypes and Indigenous identity. As a lifelong surfer, Billy also ensures that his thought-provoking work invites us to think critically about the beach culture we belong to.

Academic agendas aside, on a purely aesthetic level, there is something undeniably quirky and endearing about Billy's sculptures. You can’t help but feel that you’d like to pick one up and take it home.

The exhibition opens tomorrow at .M Contemporary Gallery in Darlinghurst. You can check out the full catalogue and exhibition details here.

In the insightful interview below, Billy discusses the themes associated with his work and opens up about exploring his own Indigenous identity.

What aspects of Australian beach culture does your exhibition suggest we should think more critically about?
I think there’s this really pervasive idea of ownership within beach culture. Ever since Captain Cook and crew sailed to shore and plonked their flag in the sand declaring Australia a colony of “Great” Britain, the beach space and its occupancy has been governed by white, able-bodied males. Soldiers, Lifeguards, Surfers; the interests of these groups have been protected by an us vs them mentality. You either fit in or you can piss off. Growing up as an Indigenous Australian within surf culture, I was always really perplexed by Localism. You know, I can be a descendant of the first nations peoples of Sydney, but if I paddle out at a surf spot three beaches away, I’ll get told to fuck off by someone because I’m slightly less familiar to them than the next bloke. This all just got me thinking, where do I fit in as an Indigenous Australian? I just think there’s certain ridiculousness about it and I think my way of personally dealing with that is by humoring that culture with my art. I’d say my solo show is more concerned with Indigenous identity though. Is it hard to critique something you love at the same time?
The act of surfing is something that I will always hold dear. I love it. I’m not being critical of the act of surfing itself. I see surf culture and beach culture as being a microcosm of wider mainstream Australia anyway. These attitudes don’t stop at the beach. I think it’s important when looking at the work to know that I am acknowledging my personal involvement in these cultures. I’m not looking at it from an outside perspective shaking my finger. The work is extremely self-referential and for the most part, I’m just taking the piss out of myself. At the end of the day, most of my work is pretty tongue in cheek and I hope people can have a bit of a laugh but also that it inspires a bit of a dialogue that maybe we aren’t having. 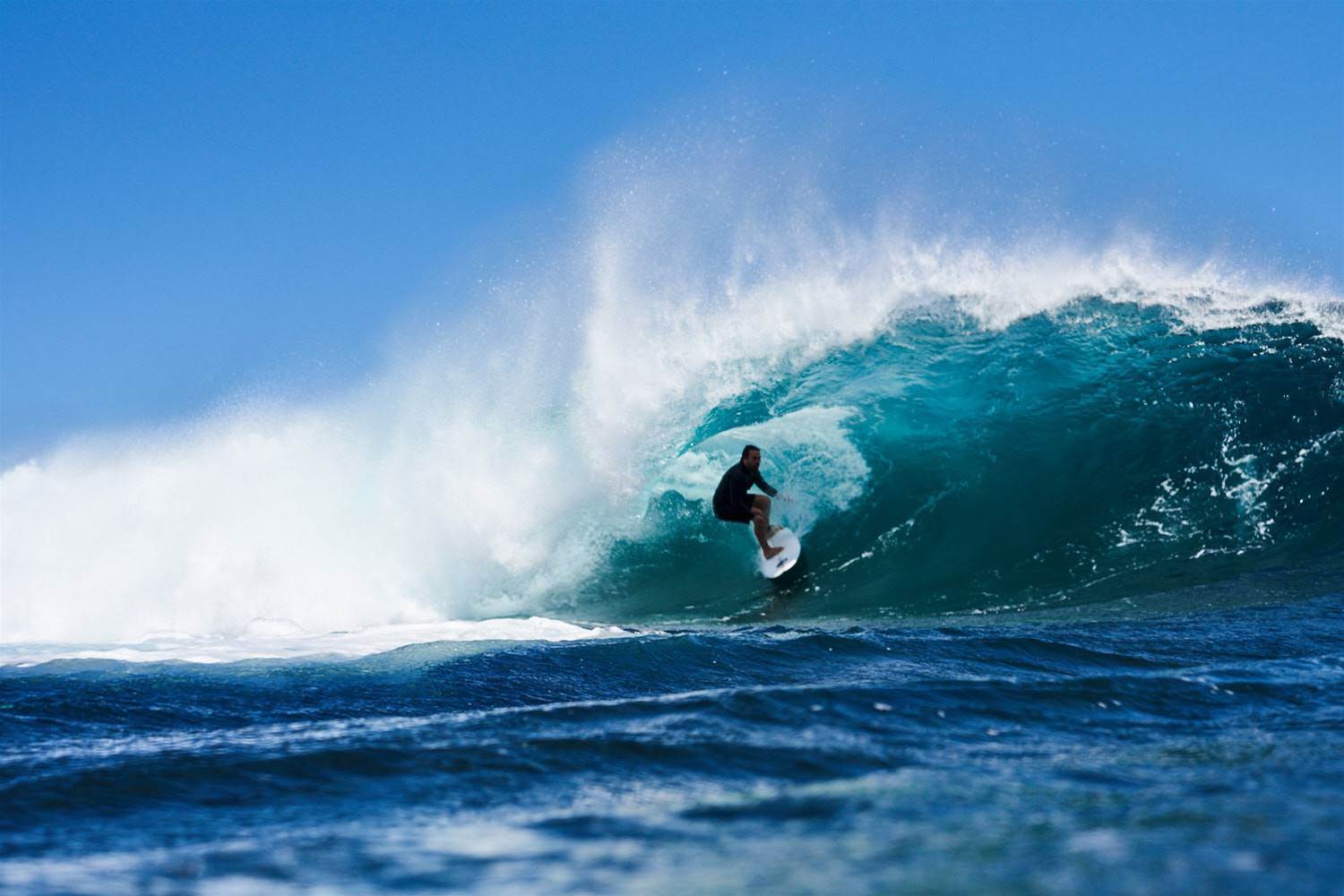 Tell us a bit about your indigenous roots and how you have come to embrace them?
I’m a member of the Darug People who occupied much of the West to North Western pre-colonial Sydney area. I am a descendant of Yarramundi, a chief of the Boorooberongal clan who were situated around the Richmond and Windsor area that surrounded the Hawkesbury and Nepean Rivers. Yarrumundi’s Children Colebee and Maria were important figures in Sydney’s early colonial history. They were both some of the first Indigenous people to be granted land in both Liverpool and Blacktown. Maria Locke was the first indigenous person in Australia to be married to a non-Indigenous person. The Sydney tribes were some of the first and hardest hit by colonization. It’s actually estimated that 90 percent of the Darug People were wiped out by smallpox alone. Then on top of that, you’ve got assimilation and displacement. Our culture was pretty well wiped out. For me, it’s been all about research. Researching my family history and where I come from gives me a feeling of empowerment. I feel really lucky that there is this information available to me. When I was younger I knew I was Indigenous but didn’t really know what it meant to me. Or was made to feel that I wasn’t Indigenous enough by my non-indigenous friends. It’s been a long process to get to a stage where I can even speak comfortably as an Indigenous person about my Indigeneity. 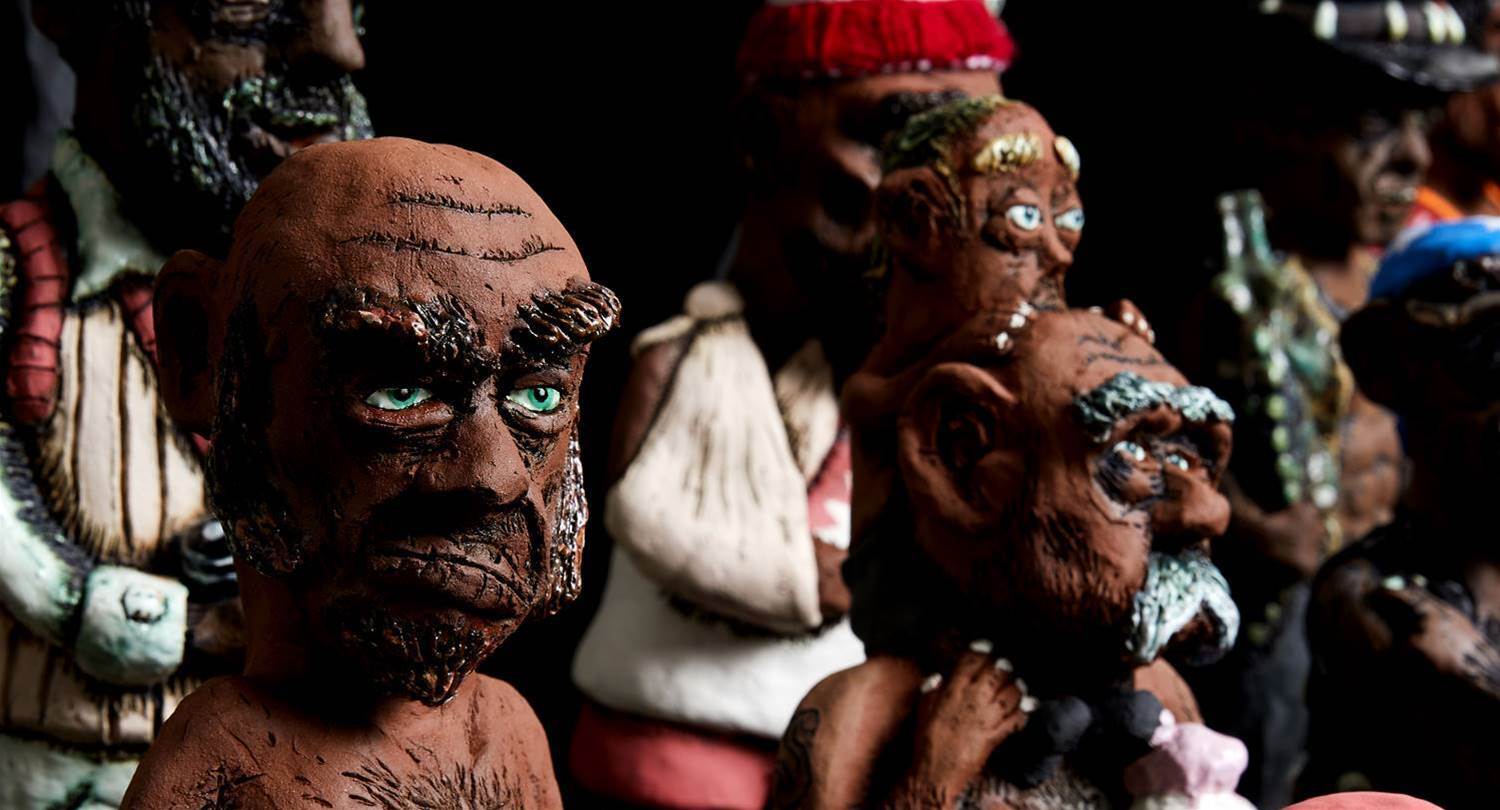 Some people at first glance might see some of the clay sculptures as culturally insensitive or controversial. However, that misses the more subtle point that you are actually making about the way popular Australian culture can de-legitimize Indigenous figures in the same space?

As I mentioned above it’s taken me a long time to really understand my place as an Indigenous Australian. Where I grew up on Sydney’s Northern Beaches there really isn’t much Indigenous representation. You know, I was never taught about the local tribes in school or my own people. There was just zero education. You were basically taught that Indigenous people lived in the bush and threw spears around, and that was everyone’s idea of what a “real” Indigenous person was. The past few years I’ve really used making art as a means of unpacking my own identity as an indigenous man in an area and culture where Indigenous people are basically invisible. My body of work in this exhibition plays with a lot of stereotypes. Not Indigenous stereotypes, but those of mainstream Australia. I take popular culture representations of the Australian male and present them in a playful manner. In a lot of the works, the raw color of the clay implies that the characters are indigenous, but I like to think of them as being more ambiguous. I think often when people envision these portrayals of the Australian male, particularly the ones that inhibit an urban landscape, it’s easy to forget first nations peoples, as our presence has been constantly disregarded. By subverting these ideas of the Australian male in a way I’m trying to regain agency to self-define my own identity as an Indigenous male living in Sydney. There are many different Indigenous identities and cultures. We are present. And we are valid. What would you like someone who buys one of your pieces to be thinking about?  How might it change the shape of their thinking?
I think art can mean so many different things to people. That’s the beauty of it. It’s so subjective. Some people might look at my work and find it quirky and enjoyable on an aesthetic level. Someone else might look deeper and really appreciate the conceptual context of the work. Somebody else might fucking hate it. I think whenever someone likes what you’re making enough to invest into having a piece for themselves it’s a really special thing.

How much time did you put into getting the exhibition together?
The sculptures for this exhibition I’ve probably been working on for a year. The paintings probably span a few years. A lot of the research and concepts that I had worked on at university really fed into this exhibition. It’s been the first time I’ve devoted a really extended period of time into creating a cohesive body of work. The last few months have been mostly organizing the documentation of the work, the catalogue and exhibition logistics. It’s actually crazy how much organizing goes into these projects. Especially with negotiating COVID and the effects that has had on hosting an exhibition, it’s been a pretty wild year.

You have enjoyed some recognition from within surfing circles but this is very much an exhibition that takes you well beyond the surf culture sphere? Is it exciting to make that leap?
Yeah, I think it’s cool. Within the surf industry or surf community, your art is always tied back to your surfing in some way or another. But I’m so green to the whole art world thing. It’s nice to be able to be a bit removed from the surf thing. I think having a dad who was a pro surfer (Billy’s dad is Robbie Bain) and works in the industry I’ve always been so close to it. It’s refreshing to immerse yourself in a whole new world and community that you know absolutely nothing about. It’s refreshing. I think also moving away from the beach to the city changed my perspective on a lot of things. Billy Bain burning off some steam with a full throttle, lay-back snap.

Clay is such a tactile material. Is it fun to just get your hands in it and go to work?
Yeah, I really enjoy the physicality of working with sculpture. Lots of my friends work trades and I’ve kinda tried to employ that mentality with my art. You know, get stuck in, get physical and really treat it like I’m plying my trade. It’s a pretty nice feeling to get stuck into a sculpture and just see it evolve and turn into this physical presence in a room from scratch.

Where was your studio?
This whole exhibition I created in the basement of my parents' place up at Avalon. I moved back up here last year from Darlinghurst to get back in the water a bit more.

Cultural criticism aside, does going surfing actually help you with the artistic process?  Clearing the head and distilling your thoughts so that what is really important is left?
I think so. I feel like my art and my surfing are such different outlets. But the more I surf the happier I am, and I feel like when I’m happy I am really productive and make my best work. It’s probably just as simple as a bit of exercise getting the endorphins pumping and alleviating some anxiety, but it helps. I love it. 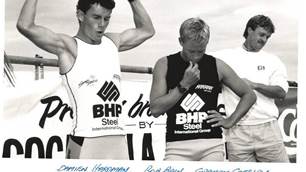 Behind the Image: Dooma ‘Steels’ the Win.