Jon Pyzel lends us his board after the Quiksilver Pro.

Shortly after the event, Tracks got in contact with shaper Jon Pyzel to pick his brain about the details of the board that had propelled John John towards what many considered one of the best displays of surfing (contest or not) they’d ever seen.

Almost a year after John John slayed Margarets, the Ghost’s allure had not dwindled, but I was still yet to try one. When I ran into Jon Pyzel on the Gold Coast, just after the Quik Pro this year, he was good enough to hand over his own version of the Ghost to test ride. The waves had dropped on the Goldy and Jon, who is the kind of shaper who loves to spend a lot of time in the water, was content to ride his foil board on the empty stretches down past Kirra.

The first thing that strikes you about the Ghost is the forward width and thickness, contrasted with the narrow, thinned-out tail. Its outline brought to mind a cuttle-fish or a missile, something designed to cut through the water very quickly when travelling in a straight line.

In the earlier interview Pyzel had explained that the Ghost features a nose that is about a ¼ inch thicker than the tail, which is not common in shortboards. Meanwhile he indicated that the rear of the board is narrow and thinned out to handle the speed and bumps. If you run your hand along the rail its apparent that it becomes significantly thinner and sharper towards the tail (most boards follow a similar taper but in this case it’s very pronounced). 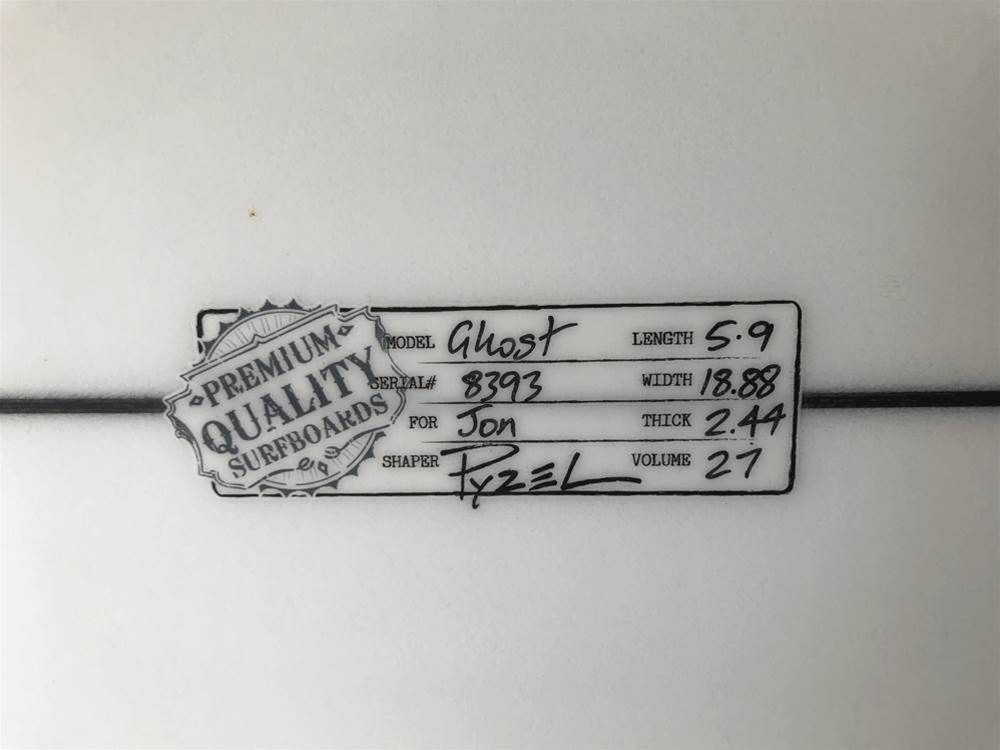 The Ghost we tested was made by Jon Pyzel for Jon Pyzel, instead of John John. It's all in the H.

My first date with the Ghost was in a clean, three-foot beach-break, near Byron. Punchy enough to achieve enough velocity to out-run the sharks, but perhaps lacking a little of the down the line projection the board was ideally intended for. Pyzel had suggested that it was best ridden in good conditions.

My preconceptions about the board were influenced by this excellent review and, as it suggested, the bottom curve proved to be a kind of pleasing puzzle to decipher. With all the width and thickness forward the board allowed you to lean on the front foot and come smoothly off the bottom with considerable speed and drive, however when you wanted to turn you had to be able to quickly transfer the weight to the back foot and feel your way through the bottom curve. I felt a little like a kid who was straddling a see-saw; determined not to let either end slam into the ground. If you got the weight distribution right, the ride was a buzz, but if you exerted too much force at either end at the wrong moment, the board quickly let you know that you were out of synch with its curves. It didn’t feel like one of those shapes where you simply plant your weight in one spot and tee-off on your turns, you had to dance with The Ghost to turn her on.

Working out a board can be one of surfing’s finest pleasures, particularly when you know there is a pay-off. Of course the fact that John John rides a particular craft does encourage you to think that a little persistence is worthwhile. Once my central nervous system and reaction time were more in tune with the nuances of the Ghost, I found it taking me to parts of the wave I didn’t normally explore. The rocker lent itself to deeper, later turns on more critical sections, while the bite of the thin-railed, narrow tail made you feel you were viscerally connected to the wave rather than hovering above it. The Ghost offered surprises and this is often more fun than a board that is completely predictable. Intriguingly, by virtue of its design it also seemed to encourage you to adopt some of those distinctive John John mannerisms, like keeping your elbows tight and hands low when trimming. It transitioned through sections best when this was the adopted body position.

Later, in small, point break conditions, the Ghost delivered down the line propulsion and switch-blade speed through turns, a desirable combo for a wave that is zippering quickly along a bank or reef. It was as much a case of keeping up with the board as it was with riding it.

From a design perspective there is much that hasn’t been discussed in this review and Pyzel’s website does a neat job of detailing the role played by the deep double concave, which sits inside a single concave throughout.

If you are one of those surfers who worries about paddle-speed, the forward wide point means there is plenty of foam under the chest, which helps when you are competing with crowds or hauling into the wave of your life.

So should you go on the Ghost Ride? Be warned you may find it a little scary at first, but if you hang in there it will be a lot of fun and full of surprises; and if you pay attention it might just spit you out the other end with an insight into how John John Florence regularly pulls off something freakish.