Tom Carroll 1983’84. Wet and Dry Makes the Difference on the Byrnes

Tom Carroll rode boards by different shapers throughout his competitive career, but he is perhaps most synonymous with the Byrne shapes which featured the iconic sash spray by Terry Cooper. While the aesthetics were eye-catching and gave the craft a personalised feel, Carroll suggests that becoming actively involved in the shaping process played a critical role in his first world title victory. Intent on feeling totally connected to his craft, Tom would drive two hours south to Wollongong, from Sydney’s Northern Beaches, to join Phil Byrne in the shaping bay. After discussing the initial design, Tom would either stay in Wollongong and train or drive back down a week later to oversee the finishing stages of the shaping process. “I’d get the wet and dry out and really feel the board,” recalls Tom. “I think that really helped me get close to the design and what I was about to ride… I got a lot out of sanding boards, with some boards if I hadn’t ridden them for a while I’d give them a light wet and dry and it would bring me closer to the board again.” 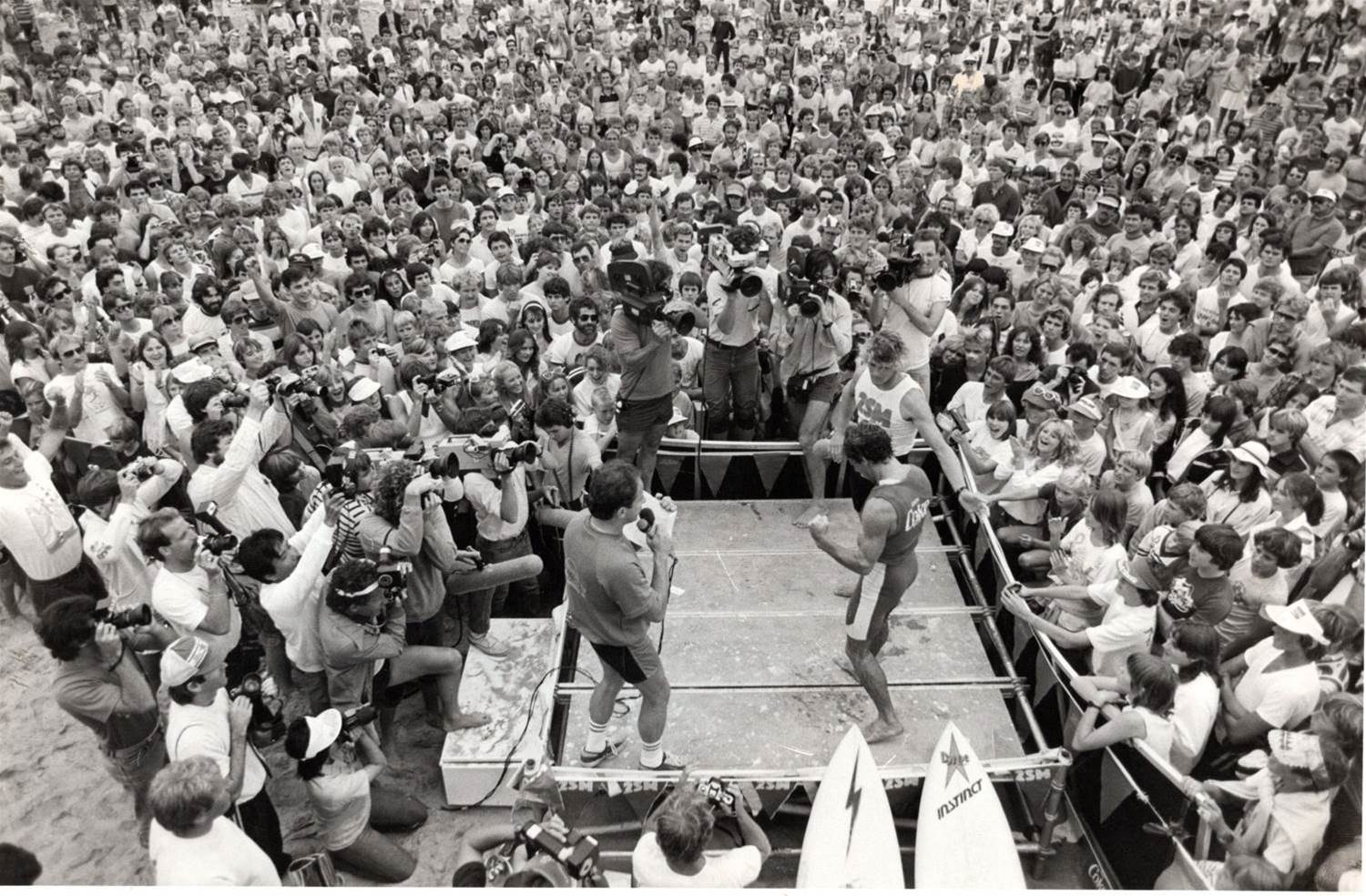 Tom claims the win over Richard Cram in the 1983 Coke Surfabout. Note the Byrne ringside.

Tom indicates that the board that really clicked for his first title in 1983’84 (the tour overlapped those two years) was a 5’9” featuring a belly channel and ‘a lovely little, V’.

After training extensively on the board in January of 1984, Tom went on a rampage, winning in Florida before returning to Australia to claim the Southside Open and the Stubbies. “It felt like I couldn’t do anything wrong on it,” recalls Tom…“I could ride it in just about anything. It became one of those boards so I really get why today guys like to just surf one board… You get so locked in on the feel that you don’t have to think about it anymore.” Asked if he still had his title-winning board Tom laments, “I never kept any of those boards, I guess I was just rushing through the 80s.” Tom drowned in glory after victory at the 1983 Stubbies.

Tom Carroll 1984/85. A Meltdown Moment Inspires an Occy-inspired Board Switch to Rusty

In 1984 Tom Carroll was hell-bent on winning his second world title on the trot. However, he faced an ominous, pincer-like challenge from the emerging talents of Tom Curren and Mark Ochiluppo. Meanwhile, an ageing Shaun Tomson was determined to prove he wasn’t past his prime and rallied to become a title threat, seven years after wining the crown in 1977. However, it was Occy’s raw ability and rapturous flamboyance, which posed the biggest threat to Tom. After witnessing Occy’s inspired display of backside surfing on a Rusty Preisendorfer design at J-Bay, Tom went into a kind of spiral. With certain pundits already calling Occy the world champion Tom found himself in his hotel room at the Gunston 500 desperately searching for the competitive fire to reclaim the title ascendancy. “I never forget being kind of devastated… some people were already calling him (Occy) the world champion and my ego was just going 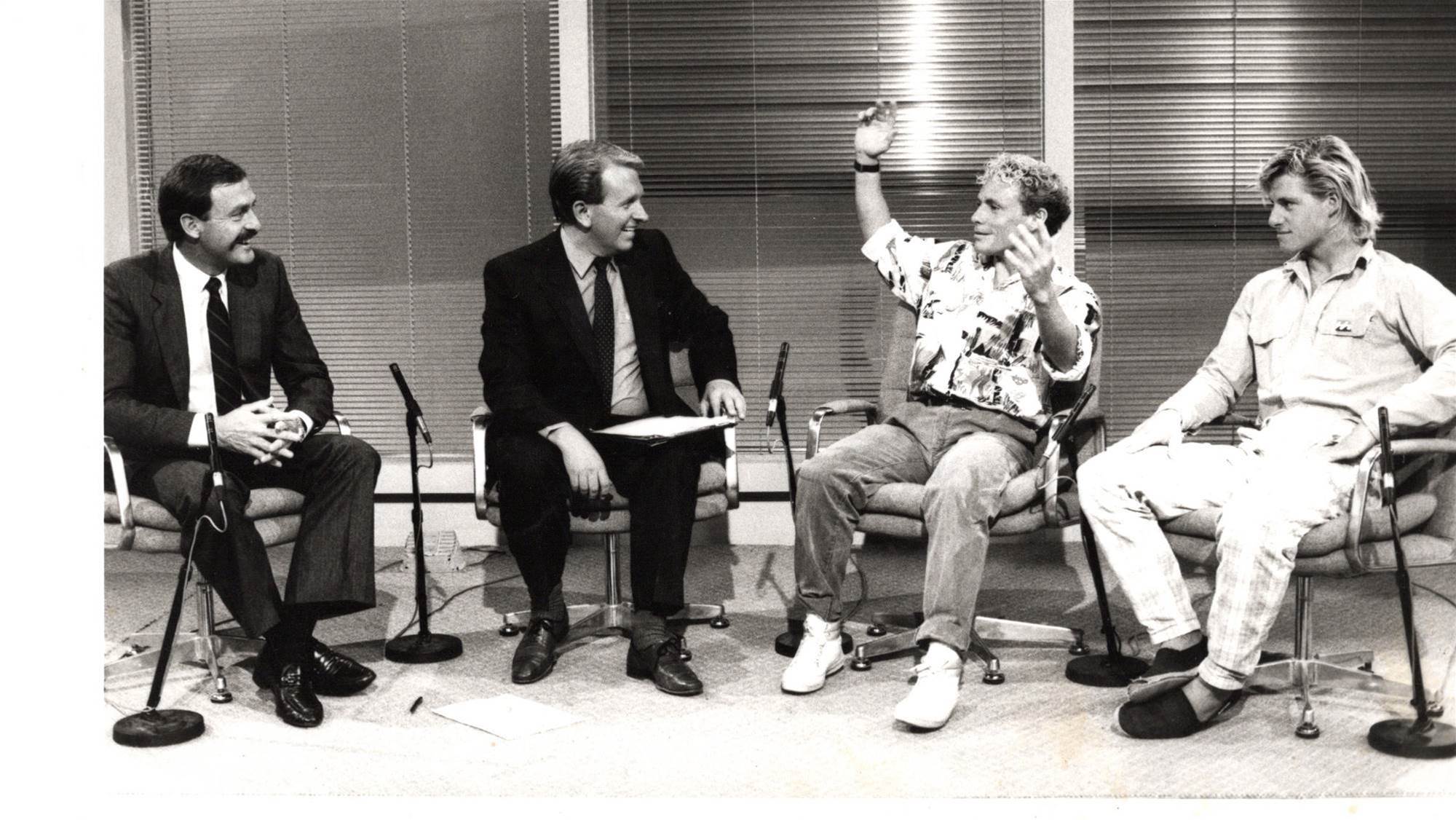 Tom and Occy in their colourful garb on Wide World of Sports.

‘F&^k that!’ . I remember how powerful it all was in the hotel room of the Gunston 500. I remember thinking ‘well, I’ve got a decision to make here. I either get really angry at these people … or I’ve just got to apply myself and really focus on what I can do to get better because Occy was clearly out ahead. He was surfing better than anyone else on tour…”

Despite going on to win the Gunston 500, Tom wasn’t happy with the board he was on and remembers leaving South Africa for California and going straight to see Rusty Preisendorfer. “ I was like ‘Can you make me a board because something you’ve got going on under Occy’s feet is allowing his talent to flair’.” Tom suggests that Rusty saw no conflict of interest and didn’t baulk at the opportunity to make him a board. At the time several of the tour’s surfers – not just the rampaging Occy – were also commissioning boards from Rusty. The way Tom remembers it, Rusty was a widely sought after craftsmen rather than an exclusive dealer. “He was doing them out of a shaping Bay down in San Diego. I got to know the freeway well,” chuckles Tom who had a rep for driving fast.

Rusty, who was shaping under the Canyon Surfboards label at the time, made Tom a 5’11”. Like the Byrne that helped him win the title the year before, the board featured a belly channel, and also a flat deck. “It was a long board at 5’11,” recalls Tom, “But it seemed to cover all the bases and I could ride it in just about anything… I think it was like 181/14 – pretty narrow.”

In California Tom practised on the board at T-street, which was ‘a bitch of a wave’ in his opinion. However the new equipment worked and he had his best ever results in California before embarking on a successful European leg.

While Occy fizzed, Tom powered towards his second world title riding a board that had been inspired by Occy’s performances earlier in the season. It was the pro surfing equivalent of an arms race. If your competitor had something that gave them the upperhand then you had to find a way to match it. Fortunately for Carroll in this instance the weapons manufacturer was happy to deal with both sides. For Rusty Preisendorfer it was a way to double his chances of having one of his boards beneath the feet of a world champion. Although Occy is arguably more closely associated with Rusty’s boards in that era it was ultimately Carroll who won the title on a Rusty.