How Martin Potter gave up money and a major shaping label to follow Glen Minami on a bold new venture with Blue Hawaii.

Throughout much of the 80s Martin Potter relied on Town and Country designs to harness his full-throttle approach, which blended raw power with rapturous progression. It’s a well-known fact that Pottz was one of the first surfers to go beyond the lip and his T & C’s were an integral part of the aerial evolution. Many of us have a memory of Pottz soaring on one of his green-and-yellow-sprayed T & C’s. However, while Pottz was widely regarded by fans and many of his peers as the pre-eminent free surfer of the time, he often struggled to translate preternatural ability into contest results. Pottz was well aware he could crush the competition when he was in the zone and was never going to be content without a world title to his name – it was just a matter of finding the right combination of mindset and craft. 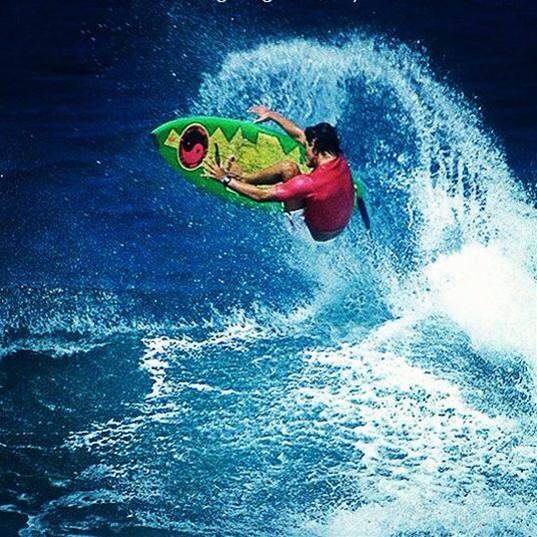 Pottz was a pioneering astronaut aboard his iconic T&C shapes.

At the time T & C boasted a formidable team of shapers. Pottz had his pick of boards from Glen and Dennis Pang, Ben Aipa, and Glen Minami, amongst others. He was paid handsomely to ride for T&C and could order as many boards as he liked. While he rode shapes made by all of the shapers from the T & C stable, it was with Glenn Minami that he developed a real affinity.

According to Potter, his connection with Minami eventually became a source of friction within the company. “Because I started choosing his boards over the other guy's boards, there was this conflict in the factory. And he came to me and said, ‘Look, there's all this bullshit at the factory. I can't make your boards anymore. I'm leaving. I'm gonna go do my own thing’.”

Glen Minami in the shaping bay.

Convinced that Minami’s boards were critical to his aspirations of winning a world title, Potter decided to sever ties with T & C and follow his favourite shaper. “I kind of went well, I want your boards, so I'm going to come with you … It was a pretty gnarly move because I gave up a pretty solid contract … Everyone's at that level where you've got that ability to win. And I think that extra little difference is the board… You watch guys through their careers, and they've had those magic boards and they were unstoppable, which to me, that was what I was searching for and Minami was the guy that was going to give it to me.” 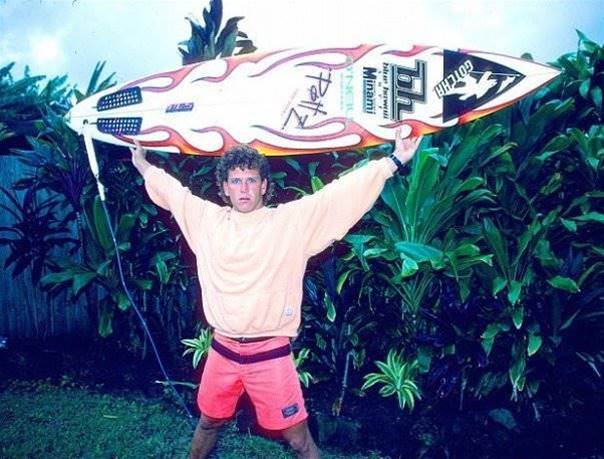 A wild-eyed Pottz holds one of his flame-sprayed BH designs aloft like it's some kind of sacred medieval weapon.

History shows that Minami split with T & C around 1987 and kicked off Blue Hawaii surfboards. By the beginning of 1989, he and Pottz had their boards dialed and Pottz embarked on tour equipped with four Blue Hawaii shapes featuring the flame spray that would become synonymous with Martin Potter.

Pottz won the opening event of the year, The Coldwater Classic, on the board he dubbed the ‘Green Flame’. After a fifth in the Beaureapairs event in Oz he won The Coke Classic and Bells on the Green Flame. In Japan he won again, this time riding a Minami Blue Hawaii he borrowed from John Shimooka, who was also sponsored by the nascent company. Pottz recalls being so confident in his equipment at the time that he didn’t even show up to heats with a back-up to jam in the sand. When asked to nominate the board that really sealed the title for him Pottz points to a purple-flamed 6’0” x 19 x 2 3/8. “It was a squash tail and had a little belly channel, with glassed-in fins and real boxy rails … That board pretty much saw me through the world title and if I didn’t have that I probably would have struggled for sure.” 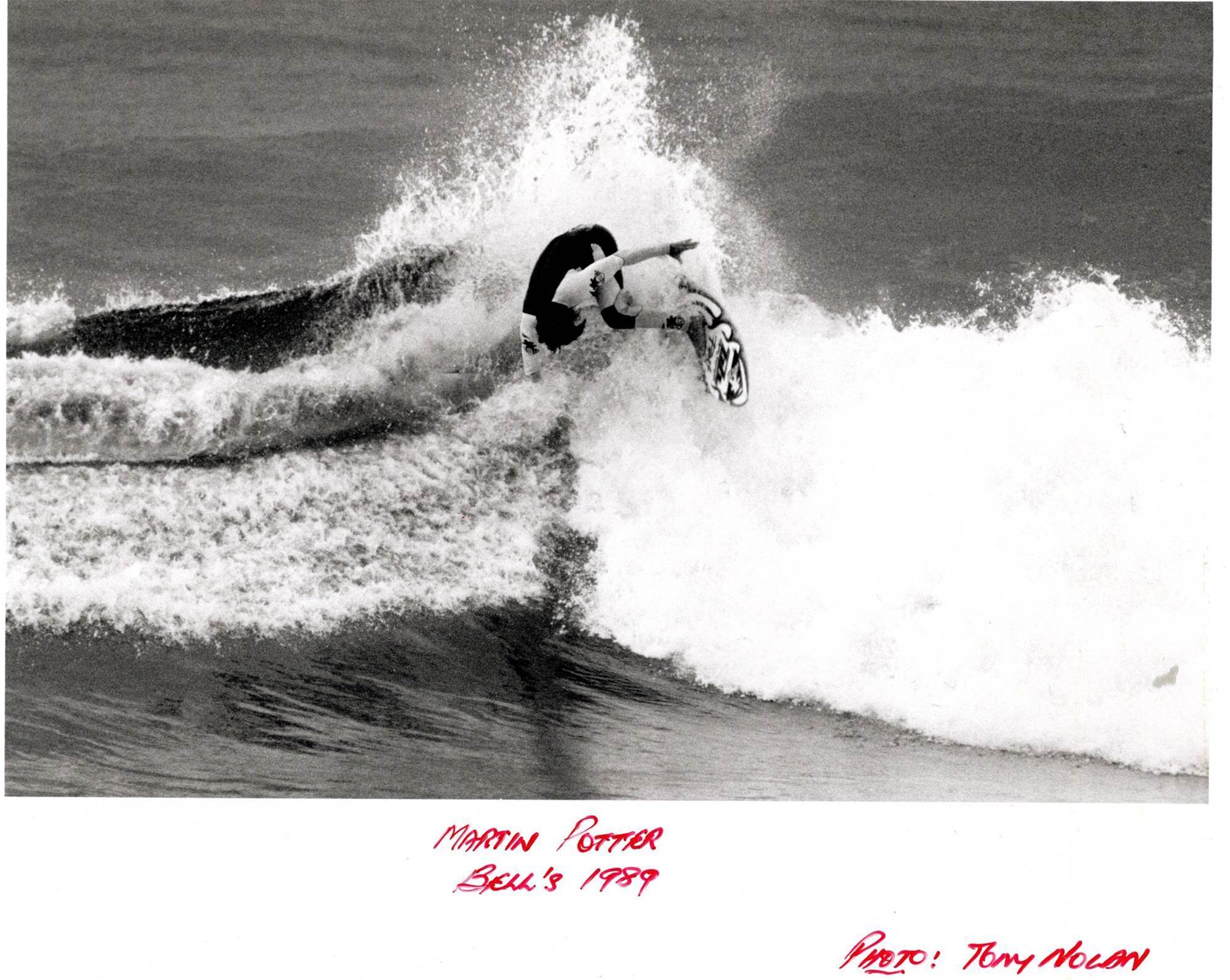 Pottz jamming at Bells in the year he won the world title and the Bell.

On the Purple Flame BH he claimed two more events and a fifth on the European leg and all but locked up the title. By the time Pottz finished second in Brazil on the Purple Flame he’d broken all his other boards. It didn’t matter, as the tour rolled into Hawaii for the final leg all he had to do was paddle out and the title was his. Riding Glen Minami’s breakaway Blue Hawaii shapes, the wild man of surfing had pulled off the most emphatic world title win in Pro Surfing history. 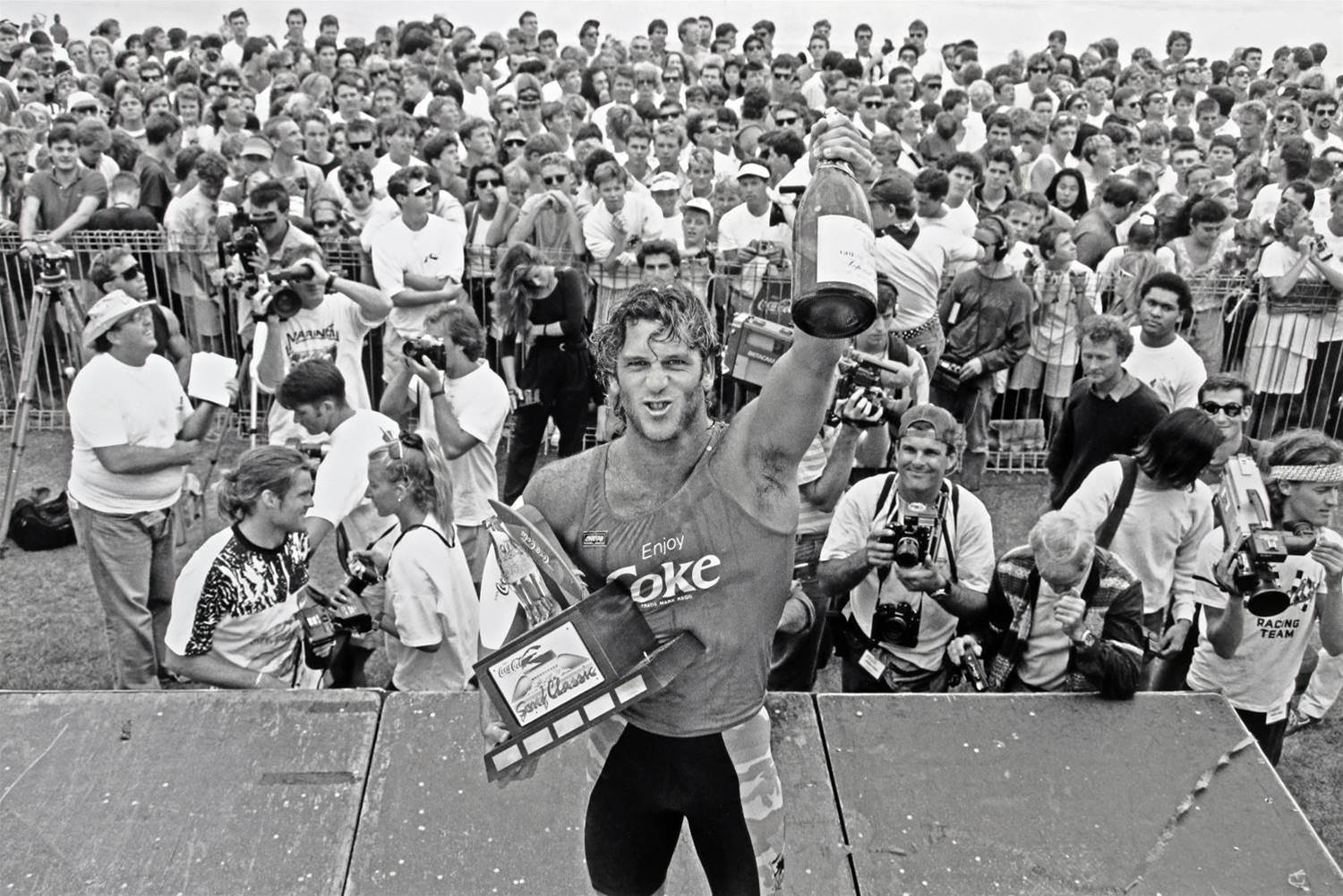 “It was a sliding doors moment,” reflects Pottz. “I was thinking do I give up all this money and go with Minami and then what if that doesn’t work, I’ve given up a solid deal but I knew it was going to work because the guy was a magician back then and he still makes amazing boards.”

These days Pottz rides Matta surfboards by Portuguese shaper Nuno Matta, but suggests there has been discussions about re-releasing his 1989 flame-sprayed Blue Hawaii, Minami models. As for the originals, he gave them all away. “I didn’t really have that mindset of stashing boards. I was sort of more like, I’ve had my fun with it now, I’ll pass it down and turn someone else onto it and it’s got a bit of history for them to love and enjoy.” 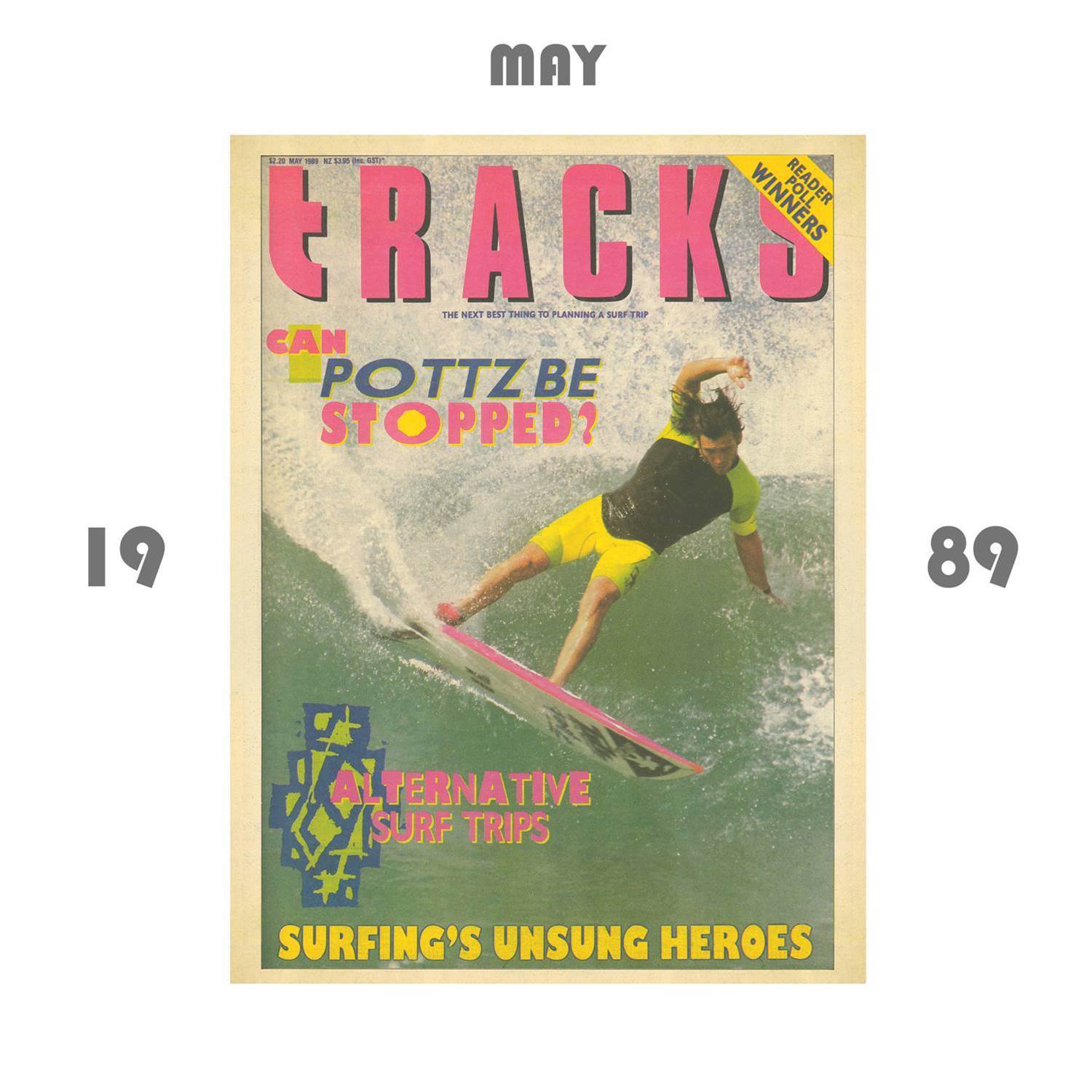 As the Tracks cover-line indicates, Pottz was unstoppable on his Blue Hawaii craft in 1989, the year he won the world title. 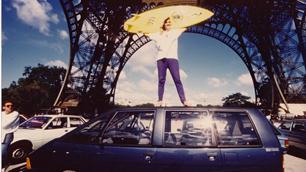