Books you should own: The Lost Boys Sam De Brito’s debut novel caused a stir when it was published in 2008. 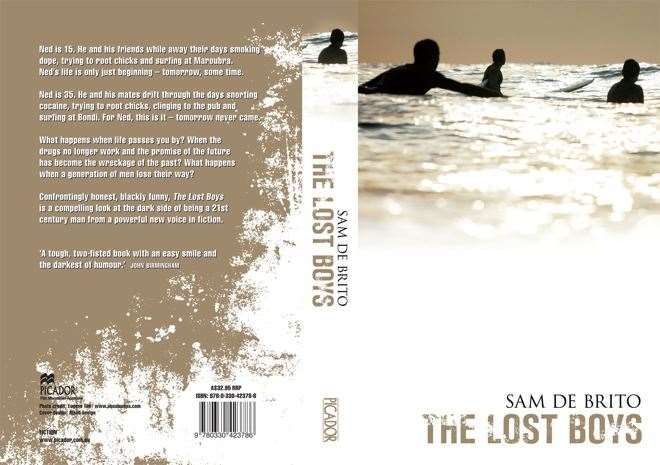 The gritty, darkly humorous, reality enhanced story telling will be familiar to anyone who has read the novels of Charles Bukowski, Chuck Palahniuk or Irvine Welsh. The honesty and insight into the troubled male psyche are equally laudable. The difference is that the Lost Boys are surfers from Bondi and their world is frighteningly recognisable.

While it’s funny throughout the novel has a clear message about the perils of arrested development. Surfers (or maybe it’s just surf mags?) might want to take note because we have a thing for the eternal grommet. We don’t like serious people. We cheer on a smashed forty-year-old spitting the winkle at a party like he’s some kind of anti-aging guru. It’s understandable to want to stay young forever but is it a good thing?

The Lost Boys paints a dark picture of prolonged hedonism and questions what it is to be a man (tip: if you answered drinking 15 schooners you’ll benefit from this book). After a while it becomes sad to watch and destructive to participate. The protagonists lack role models, discipline and self worth. They are getting old and getting fat, jammed in an adolescent fantasy life.

It’s a modern world conundrum that too much freedom can be a bad thing. You don’t see many third worlders abusing themselves and trying to find meaning in life. Addiction, mental ill-health, spiritual voids, narcissism, suicide – all are on the rise and are almost exclusively first world problems. The Lost Boys will be a movie before long but it should be read by every Australian male before they reach 25. Certainly well before they reach 35.

For a regular dose of Sam De Brito get along to his wildly popular SMH blog: All Men Are Liars (except Sam De Brito).