Authors note: This could get a little boring.

It’s hard to get inspired. The rain is coming down in sheets, the surfing is far from dynamic, the waves are beyond junk and the Brazilians are still sticking around. It’s not easy to keep the tone light, to crack jokes and to bring life to an article that is going to sound contrived no matter what I do. To be honest, I’ve got nothing. The most hyped-up heat in the world (15 world titles, 1 zillion CT heat wins etc.) turned into a fizzle fest as Medina bashed his way into a lead against Kelly and Mick in the mediocre to shit waist-high sets.

It was Commissioner Perrow who had the task of calling the contest on today. Kieren has crazy eyes. I remember sitting on the beach in Hawaii many years ago, watching him pull into death closeouts coming off Backdoor Pipeline. The same stretch of reef that has killed people, maimed people, hurt people and given other people serious headaches. It’s the stretch of reef that needs to be respected, and treated with caution. Surfers should go on waves that have at least 50% chance of staying open. Kieren wasn’t obeying any of those rules. He was showing no respect, and he was going on waves, big waves, that had way less than 50% chance of letting him out. The man was reckless. He was a fool rushing in where angels fear to tread. Now at J-Bay he had to do the same.

There were so many people who were ready to write him off over the decisions made over the last few days. ‘We could have run heats on Tuesday,’ or we should have surfed Thursday,’ or whatever the days were that showed a few flashes of brilliance. But it makes no difference. We’re living in the moment, and surfing is possibly the most in-the-moment sport in the world. To dwell on the past makes one sad and to think on the future makes one anxious. As Surf Director Eric Stedman succinctly said to me, “You can’t surf yesterday’s waves.”

Some of the surfers who don’t worry about the past, who don’t dwell on negativities and who live in the moment are the Brazilians. They deserved to win today and all are showing form. Adriano showed the same style and approach that saw him with the event in JBay as a WQS in 2012, and even claimed one very ugly air reverse just like he was doing in 2012. Gabriel is still on the winning program that he has displayed all event. He is confident and fast, has loads of support and is in a good place. To win against Kelly and Mick must have cleared the head a bit after a shitty year.

Tomorrow looks really, really fun – in a 3-foot howling devil wind kind of way. The conditions might go sublime later, but it’s going to be a choppy start to the day. The joy of firing Supertubes in her most classic form has totally eluded us this year. It happens. The final day of last year probably took the energy out of this year’s event and we deserve to get a little bit skunked. At least Kelly is around this year. If he had chosen to go to Tahiti instead of JBay, as he did a few years ago and very nearly repeated this year, that would have been a skunk-up. To see him charge past Mick Fanning, standing gingerly on the rocks prior to their heat, and launch into the keyhole with brimming confidence as the Australian looked on was a sight. To not have him around and to have shit waves on tap though makes it very boring.

Now to actually conclude this awful story from a pretty awful day… Alejo Muniz is going to win this contest. His display of controlled power surfing in the onshore conditions made him stand out today when no one else stood out. 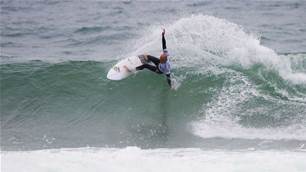 Brazilians Power On While Round 4 Flops At J-Bay