Ryan Callinan proves that he can go all the way on his home turf.

I woke this morning to an email from the WSL that read: “FORECAST: 5-6' With Possible 8' Sets, IT’S ON”. While it would have made for an epic opening day of the Ripcurl Newcastle Cup, the reality was more similar to the “fun” waves that were described in the fine print of the email.

Upon arrival at the competition site, there was a gaggle of disgruntled men gathered along the blacked-out temporary fencing erected by the WSL. “It’s the Great Wall of Merewether. You can see it from space,” I heard one remark. Inside was a completely different story. Good Vibes resonated from the grommets and seasoned veterans. Everyone was obviously geed up for a big day of surfing.

Hometown hero, Ryan Callinan, proved he has what it takes to mix it with the likes of Italo and John John at Merewether, putting together the highest two-wave total of the seeding round. Ryan looked at ease and in control, showing why he’s regarded as one of the most stylish surfers on tour. He had all the support of the locals too, many of whom had donned custom-made ‘R-Cal’ t-shirts. Ryan’s performance gave a strong indication that he has the form to go deep into the finals in Newcastle. Australian fans have been crying out for a contender since Julian Wilson last had a shot at the title and although it’s early days, Callinan looks like he can deliver the right message to the judges and be part of the title ‘Conversation’.

As for the international surfers, all the talk today revolved around Italo. While most competitors were gathering their thoughts and warming up with quiet stretches, Italo was sculling Red Bulls and shadow boxing on the sand. It seemed like he was in a race against the inevitable caffeine comedown from those hellish cans, but they worked wonders for him in the water. The crowd was in awe as he picked off small lefts on the shore and put on an aerial masterclass. In the same heat, Jacko Baker looked great on his local break, placing second. Meanwhile, Jack Robinson struggled to find his groove in the small conditions, reaffirming fears that flatter-faced beach-breaks might be his Achilles heel on tour.

Tour veterans Carissa Moore, Tyler Wright and Steph Gilmour all looked dominant in their opening heats. On the beach, many were wondering if any newcomers would be challenging for the top spots in the Women’s draw. Throw Sally Fitzgibbons into the mix and it looks like the usual suspects will be going head-to-head come to the pointy end of the competition. Although tour rookie, Isabella Nichols deserves a mention for her narrow win over experienced campaigners, Tatiana Weston-Webb and Malia Manuel. Former CT surfer, Laura Enever, also delivered fresh energy to the commentary team with her insightful observations and personal reflections. Of course Joey Turpel was back with all his feel-good hits and irrepressible positivity. So ‘amaaaazing’ to have you back in the box Joe.

In other notable Novocastrian news, Morgan Cibilic, Jacko Baker, and Phillipa Anderson all posted high enough scores to progress to the round of 32, with only quasi-novo, Julian Wilson, heading to the elimination round.

The WSL’s critics won’t exactly be silenced after the wave quality in Newcastle today, but ask anyone who was there in person and they’ll tell you it was a success. Stoke levels are running high in Newcastle and the local crowds can’t wait for day two of competition. 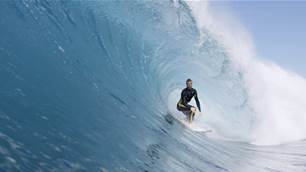