Remember that time Sydney’s weather threw a tantrum and almost snapped us in half?

A huge northeast swell, a vicious offshore wind, conjuring the largest slabs we’ve seen in a decade. Remember that…?

Well it’s a no brainer to find a scary wave, stick in a few daredevil elite athletes and throw some RedBulll advertisements around…. Yes I am talking about Cape Fear. aka “Ours”

The 2016 Red Bull Cape Fear event was the most gut wrenching, unblinkable viewing I’ve ever seen. As Jug Head, Russell Bierke, Richie Vas or the Abberton brothers negotiated those evil steps, we cheered but also dreaded seeing a surfer actually die on a live broadcast. 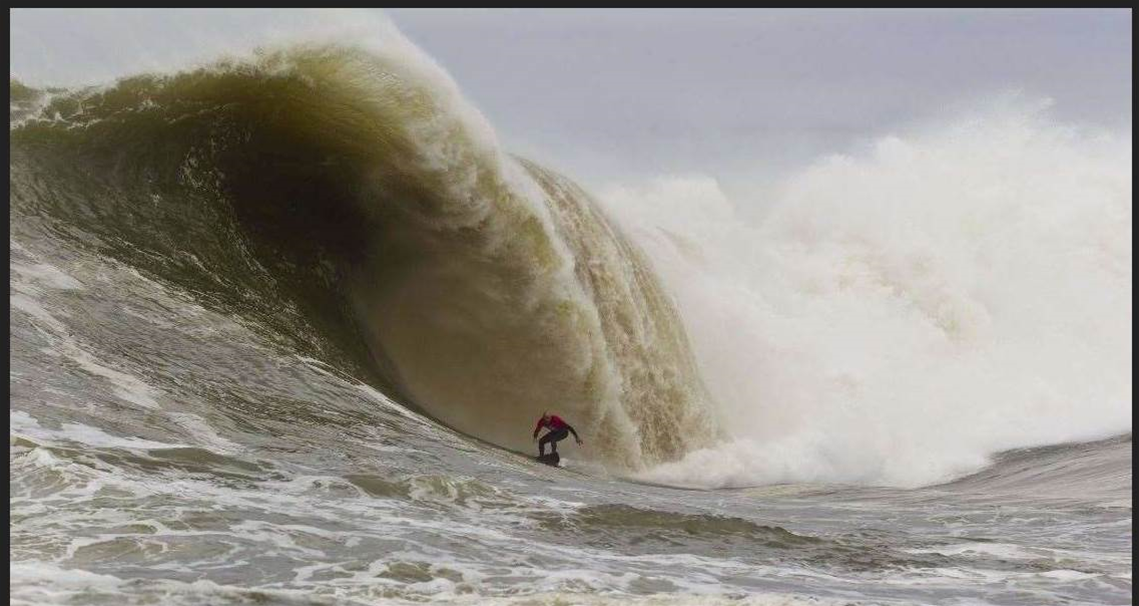 Justen 'Jughead' Allport at the base of a behemoth during the 2016 Cape Fear event. Photo: Hornby

I remember standing on those rocks in the midst of the crowd, shivering at the sound of the waves smashing, the ground rumbling with each set, the silence of the crowd as the surfers disappeared and especially the taste of salt as the spray hit us like shards of exploding glass. It was all so terrifyingly real. For the next few months I hid from the boss watching replays and the enormity of what had transpired became even more apparent.

Well… after two days of bruising slams and unbelievable makes, each rider endured their Cape Fear lashings, and only a few saw the inside of an emergency room. A huge pat on the back for Redbull, athletes and surf fans alike.

When the comp ended, I walked back to my car slumped in the front seat, with hands on the wheel, mind-mushed and jaw still dragging on the ground. I thought, “How the fuck will they top this event?”.

Despite a four-month waiting period, the Swell just never kicked up enough in 2017 to warrant hosting the event.

The vigorous winds, the four storey swell, the five star housing on the northern side of the bridge actually stayed put instead of sliding onto the beach dunes below; it just never felt like 2016 again, so RedBull cancelled. Till next season…

Now… As Next swell season arrives… Cape Fear is the talk…

But with Sydney weather looking pretty tame, Cape Fear is looking a bust. Stress less, one thing Australia can count on is slabs, either in the water or at your local bottlo’, the slabs are A - class. Although Red Bull have yet to commit to an official statement, it seems the bold contest format, pioneered by Mark Mathews, is set to move south to a scarier, meaner, bigger wave that has made the most southerly state in Oz famous. Yes, I am talking about Shipstern Bluff.

Likely to be included in this event will be the 2016 Cape Fear champ and recent BWT inductee Russell Bierke, Laurie Towner and Gold Coast slab pyscho Ryan “Hippo” Hipwood, along with a gaggle of Aus standouts. And what could be the most impressive Australian retirement since John Farnham’s 13th “Last tour” tour, 3 times world champ Mick Fanning. If this is his idea of retirement, don’t we all have an exciting year ahead.

The event window will be open for a couple of months, and will run only if three factors are present – Size, Cleanness and Optimal Swell Direction.

Redbull has indicated that you can opt for a tow in or a paddle option, preserving the exact same rules as the last Cape Fear event.

This will be the first-ever competition at the notorious Tasmanian slab. The whole event will be broadcasted live, for you to watch in the comfort of your boardies with a crisp lager in hand.

Whilst I’m saddened that Cape Fear is no longer an option, I couldn’t be more stoked to see world-class slab tamers attack Shippies on its finest day, in a competition format. Excited is an understatement.