Another Bali wave under threat.

I got the text message from a close friend around 3pm. Happily nestled up at Uluwatu, I almost couldn’t believe what I was reading.

“You won’t believe what I’m seeing. They are destroying Canggu. Come. Now.”

Intrigued, but somewhat non-fussed, having watched Canggu already develop from an idyllic rice paddy paradise to urban-hipster scene, I hesitantly jumped on my moto for the hour ride on the chaotic Balinese roads to see what was going on.

Meeting up first with my friend in the Canggu satellite suburb of Berawa, I smirkingly asked, “So…what’s going on?” Half expecting some silly answer like Canggu had run out of Almond Milk or rainbow coloured yoga pants were out of stock and the hipsters and yogis were causing a scene, I wasn’t prepared for what I was about to hear or witness. 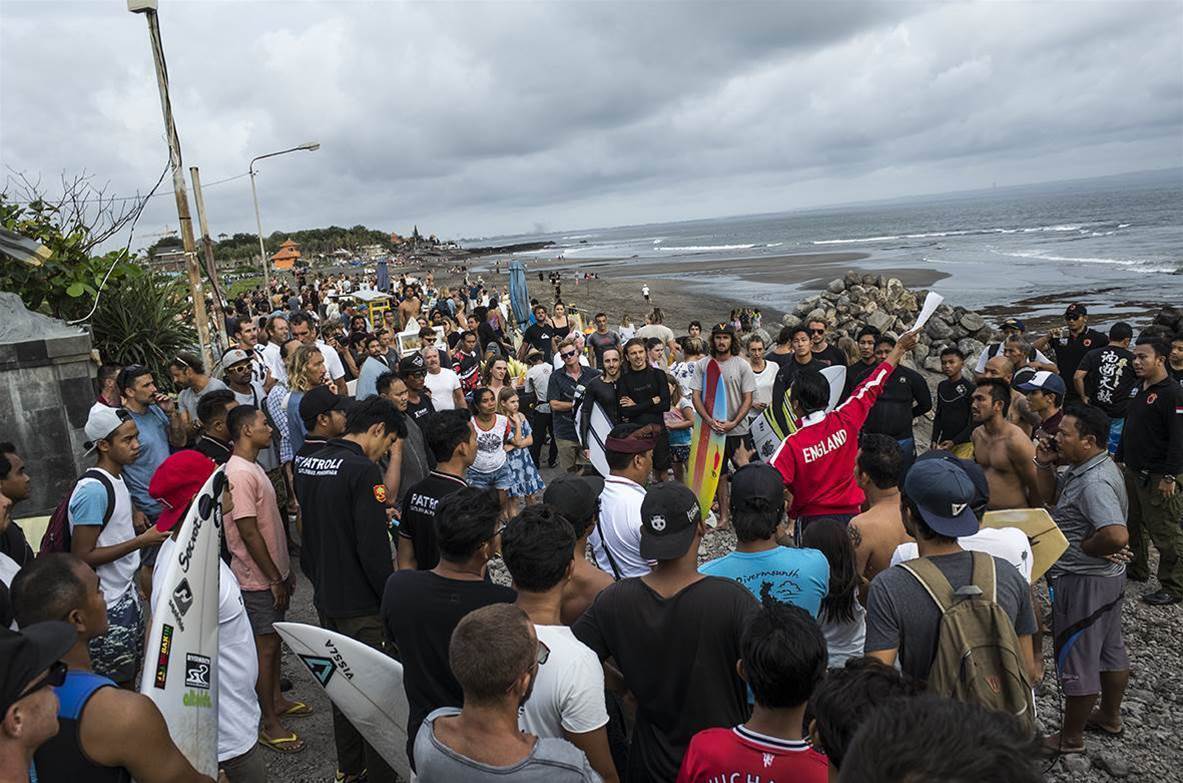 Protesters surround a project representative as construction gets underway just 100m away from Echo Beach.

“You’re not going to believe it Fran. Two days ago it started. They are building a jetty to Echo Beach.”

My mind instantly flashed to thoughts of Kirra, my home wave, and how human intervention had arguably destroyed the perfect sand banks that formed the lines etched into our memories from the likes of MP and Rabbit.

We quickly hustled across the back alleys that lead to Pererenan beach, and there it was. In full flight, a bulldozer actively piling rock upon rock forming a new jetty, with the hallowed, rocky, sand-bottom peak of Echo beach only 100metres away.

Echo beach, one local expatriate remarked next to me, “Is Trestles, but better. More swell, more consistent, and boardshorts. This is a surfing tragedy.” 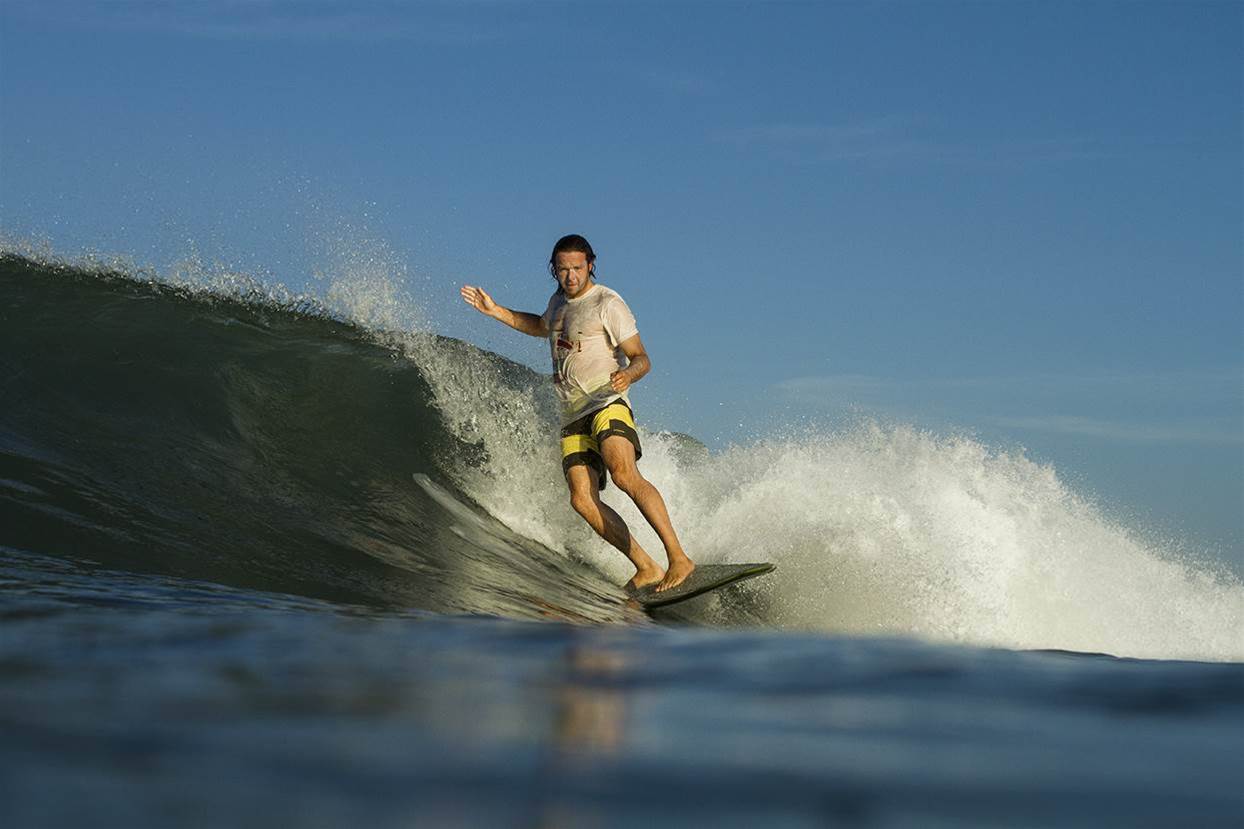 A surfer enjoys a bettter moment at Echo beach.

Hundreds of locals, tourist and expatriates began to gather around the development site as the evening approached – most of them called in via a last-minute text and Facebook messages.

All of us were trying to grasp the machinations of what was transpiring through a serious of rough translations, punctuated by yelling and arguments. It appeared we were witnessing a $35 Million development supported by the Government, but apparently rejected by the local Banjar (Village council and elders).

Local expatriate Rob Dubois, co-founder of local yoga studio ‘The Practice’ commented, “They think this will help business in the area. This will destroy Canggu.” 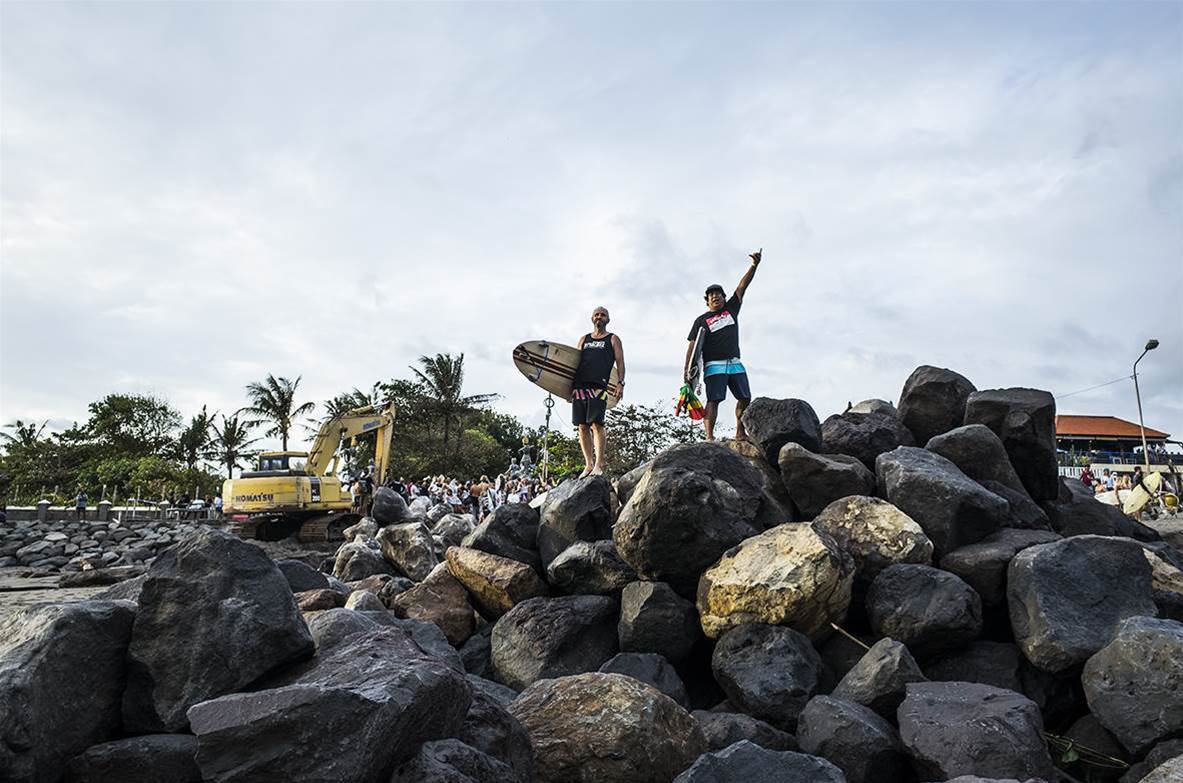 Local surfer, Made, and expat, Rob, perched on the rock-wall which threatens to destroy the wave at Echo beach and disrupt Canggu's rich surfing culture.

I continued to meet a stream of surfers who were devastated by what they were witnessing. Young tourist Max had flown in only the day before. “I have never been here before, but this place is famous for its surf. That’s why I’m here.”

“You have no idea what you are doing! What this is going to do!” yelled local surfer Made in both English and Indonesian.

As the crowd thickened, a response ‘Patrol’ team sent by the developers charged down to the beachfront to try and disperse the crowd. Ironically they were wearing t-shirts embroidered with the phrase ‘Save our Village’ and they were overheard saying, “Just get rid of the people. Just get rid of them.” While announcing that they would amend the plans and frantically waving the development papers over their heads, one member of their group began filming the faces in the crowd. I was informed this was done so that various forms of pressure could later be applied to anyone identified as a protestor. 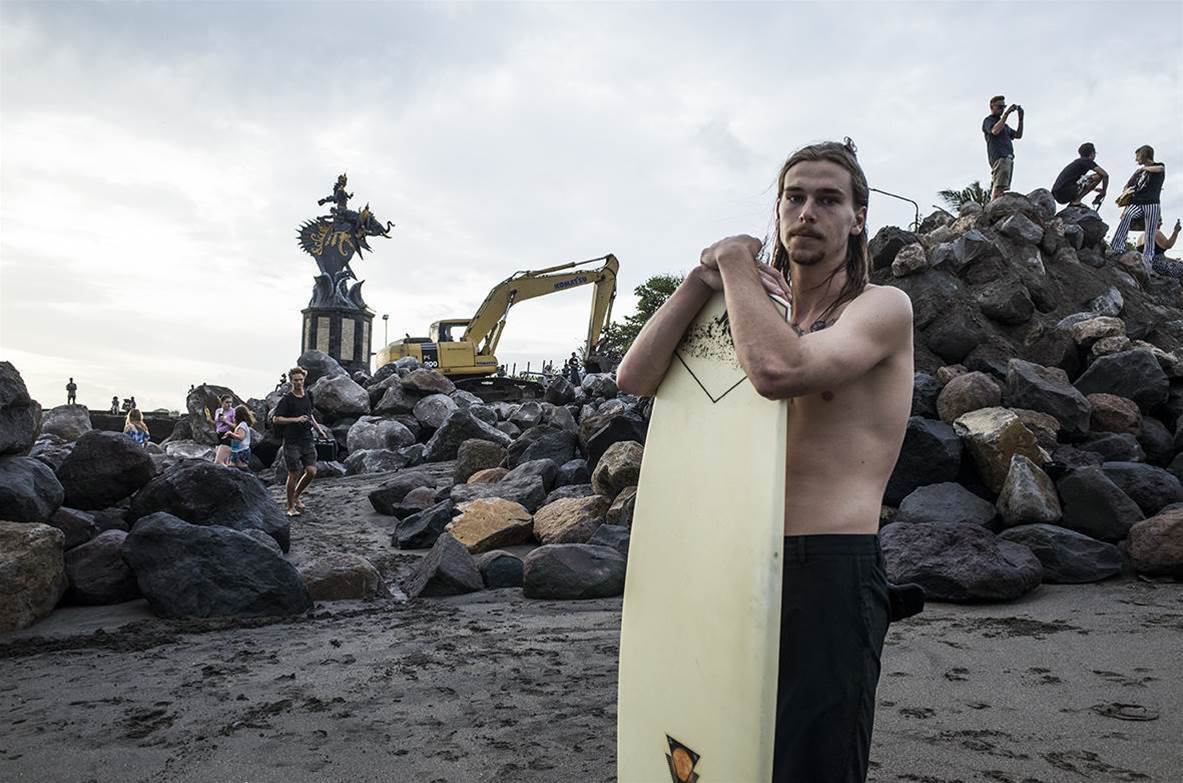 A forlorn travelling surfers takes a stand against the development.

I t was hard not to feel a little threatened. Having simply turned up to see what was going on, I now felt like a criminal for doing what any self-respecting surfer would do when witnessing the destruction of one of the world’s most famous waves.

The crowd marched on in unison for a symbolic paddle out, as non-surfers remained on the beach hand in hand, forming a wall separating the development from the surfers. Paddles outs, usually represent the passing of a loved surfer, one couldn’t help but think we were witnessing the death of Canggu. 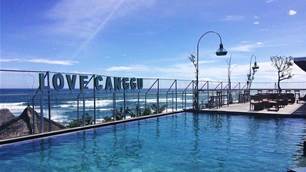