Has Tracks journo Kirk Owers uncovered the first nail set to close the coffin on Keramas? A few months ago I had a good surf at Keramas on Bali’s East side.


A few months ago I had a good surf at Keramas on Bali’s East side. Four foot, no wind, barrelling, and just two others out. I was lucky. Earlier in the day the wave was swarming with pros, tourists and locals. There were cameras on the beach, in the warungs and in the water. Everyone jonesying for a wave or a photo or both. I sat it out. Had a Nasi Goreng and an icy glass bottle of coke-a-cola. Then I took my camera and ipod for a walk. I returned to an exodus: people were packing up, heading back to their lodgings in Kuta, Seminyak or the Bukit.

Not long after I paddled out three more guys went in. So it was just me and a couple of Pommies. It was my best surf in a long time. Afterwards I got talking to a friendly local who owns one of the warungs. He was thrilled that his family could make money supplying the surfers who come to Keramas. The wave had become very popular over the last five years. Photos shoots, magazine spreads, films, contests, pro surfers... The place was really on the map. And yet here I was surfing it in peak season with next to no one. The previous day I spoke to an acquaintance who’d surfed small Ulus with 40 or 50 others. He was drinking heavily and sounded depressed.
It made me grateful that there is no tourist accommodation at Keramas.

Uluwatu by comparison is banked with hotels all the way to the mega resort complex that used to be known as Dreamland. The warung owner explained Keramas is in a green corridor that is protected by an environmental law. I was impressed. Green corridors trumping developer dollars in Bali! There is a God. But then it happened. Yesterday I’m flicking through Time magazine when I chance across an article on Komune, an up-market Gold Coast resort which caters for surfers. Apparently Kelly stays there whenever he’s on the Goldie and his “shin digs at the poolside bar are the stuff of local legend.”

Anyway, last non-fragmented sentence of the magazine’s story and mine: “Next stop: Bali, where a resort will soon rise from rice paddies overlooking the awesome reef break of Keramas, just north of Sanur.”
Damn. 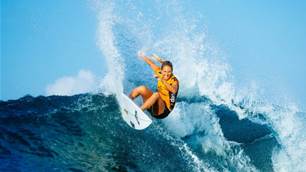 Waves That Mattered - Steph's 10 at Keramas