Tracks takes a look at the recent quantum leaps in man-made wave tech.

In the last few weeks it seems we may have reached tipping point in the artificial wave arms race. Shit, suddenly, just got real with the world’s best surfers testing waves in Melbourne, Bristol, Yeppoon and New Jersey.

Now artificial waves aren’t new. In the late 19th Century Bavarian King “Mad” Ludwig II electrified one of his private lakes in Neuschwanstein Castle to create artificial waves. Which, given that it sounds like the surfing equivalent of sticking a knife in a toaster, strangely didn’t take off. In the 1930s a public swimming pool in Wembley, London created ripples similar to the ocean's flowing motion. In 1985 Allentown, Pennsylvania hosted the Inland Surfing Championships, the first professional surfing event to be held in a pool. Wave pools in Malaysia, Tenerife and the UAE all opened in the next ten years, using hydraulic pumps to create surfable waves. 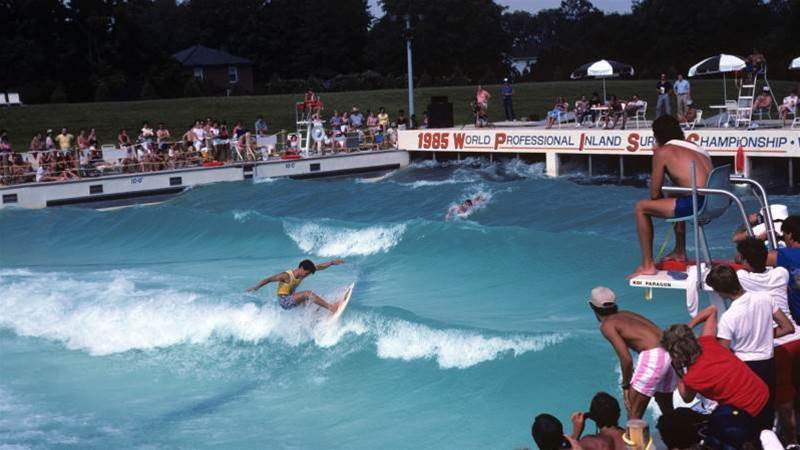 Feel the power! Or the lack of it, at the 1985 Inland Surfing Championships at Allentown Pennsylvania

However when the next phase kicked off with Kelly’s unveiling of his wave in December 2015, few thought the tech would proliferate quite this fast. In this it is probably the Wave Garden that is leading the charge.

URBNSURF Melbourne | Ready For Waves from URBNSURF on Vimeo.

Ten years since it opened the private R&D centre in northern Spain Taj Burrow and Tyler Wright were two of the first test pilots at Melbourne’s URBNSURF which uses WaveGarden’s Cove Technology and is due to open early 2020. In Bristol UK, The Wave became the first public surf park to use the technology at scale and is now open for barrels and business.

Meanwhile, there are another 28 other Wave Garden Cove projects in development across five continents with pools planned in Coachella, Edinburgh, London, Switzerland, Barcelona, San Paulo, Santiago and Seoul.

Next in line is the American Wave Machines aka the mob from Waco. Last week footage emerged of Rob Kelly, Quincy Davis and 10-year-old Cruz Dinofa hitting a new indoor facility at New Jersey’s American Dream Mall. The Mall is the most expensive built in American history and the pool is at the heart of attempts to make it profitable. It looks fun, especially if your are ten, and considering the water in New Jersey tops out at 10 degrees in winter, a boardy sesh in January will have its appeal.

Elsewhere in New York, there was another recent announcement with I saw the news a father-and-son duo Brett and Chris Portera, who claim to be local surfers have applied for planning to build  what they hope to call Long Island Surf Park, just 20 miles from Manhattan. I do worry however about the long term profitability and general surf credibility of the dudes behind this one given that its tagline is “Always 7 Foot and Hollow.” FFS

They weren’t the only ones to jump into the deep end recently. Cheyne Magnusson, the surfer brain behind the original Waco Pool has teamed up with Kalani Robb and some minted financial backers and inked a $50 million deal for a 21-acre wave pool to be called the Palm Springs Surf Club. The development will redesign the existing Wet N Wild waterpark, although the type of waves and technology used is still under wraps.

It was all a dream...so beyond grateful and proud to do this with such rad humans! Never let anyone tell you it’s not possible. Color outside the lines. Let’s go! #PSSC

That just leaves the WSL and Kelly Slater and the Surf Ranch, whose hydrofoil technology escalated this race five years ago. Australian WSL head honcho Andrew Stark recently outlined a plan to build a new facility at Coolum, on the Sunshine Coast. It will include an eco-resort and a 20,000 stadium, which seems kinda ambitious. Add the plunger up at Yeppoon and its recent Mark 2 testing and you can see that artificial waves are on the verge of being commonplace. Now no one know exactly what the longtime effects will be on surfing, but the genie is out of the bottle and they are here to stay. Probably in a neighborhood near you.