The whole wildcard and injury-replacement deal is starting to get a little confusing over at the World Surf League. I’ve been following the sport closer than I should’ve for longer than I should’ve and I can’t make arse or end of it.

What I do know is we’re a couple of days away from the Freshwater Pro. Last year it was called the Surf Ranch Pro and everyone hated it but maybe a name change will do it wonders. Personally, I didn’t mind it except it went two days too long. Medina won because he’s the best at holding his nerve under pressure but that was widely missed amidst all the accusations of boredom and lameness. Maybe it was the superfluous surfing we were forced to sit through. Cut it down to one left and one right per surfer and I bet the event would get a whole lot less boring.

But what do I know?

Fuck all about the whole wildcard/injury-replacement process evidently.

Then two teens from San Clemente got the green light. Crosby Colapinto and Kade Matson. Both rip and both have been ripping in various junior events around the States so I can make sense of that also.

But what about Mateus Herdy, Jett Schilling and Barron Mamiya? How do they fit in?

Mateus won the World Junior Title last year and got a start on the Goldy, but what’s the connection beyond that? He’s currently ranked 64th on the QS. He’s from Brazil. He bloody well rips and I rate his surfing but otherwise his selection seems arbitrary.

Jett Schilling is even more of a mystery. He’s ranked third on the North American Pro Junior rankings behind Matson and Colapinto – is that why he’s getting the call up? Why not Tommy Coleman who’s ranked fourth? Or fourteenth-placed Jojo Whelan?

And Barron Mamiya? He’s world-class and currently proving it by sitting ninth on the QS rankings, but what about the five surfers above him who aren’t on the world tour?

My problem is not so much with the surfers chosen (although yes, I’d pick Matty Banting over all of them), but with the complete lack of explanation as to why they’ve been chosen. It’s confusing. It makes rusted-on fans like myself wish the WSL would spend less time making Surf Breaks and Sound Bites and whatever else they’re doing over there and more time explaining the actual nuts and bolts of how their contests are operating.

It probably won’t matter anyway. That nerve of Medina’s is still going to take some beating. 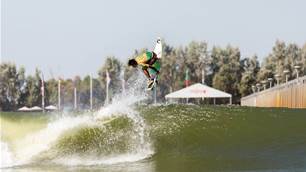 Five Things We Learned from the Freshwater Pro