Drilling into the digits of what’s left of the Outerknown Fiji Pro.

That would be the number of points Matt Wilkinson would have if he were to win the event. Given John John Florence now has 26,500 points after a successive 13th finish, Wilko’s total would be enough to hand him the yellow jersey. In the Cloudbreak massacre that was Tuesday, the professional surfing equivalent of the Game of Thrones Red Wedding, just without the stabbing of pregnant woman and musicians firing crossbows, eight of the top ten, and the entire top four, seeds out are now out of the competition. It is Wilko then who was left standing unbloodied and now able to feast on the spleens, eyeballs and intestines of his foes. Or maybe just narrow the gap. 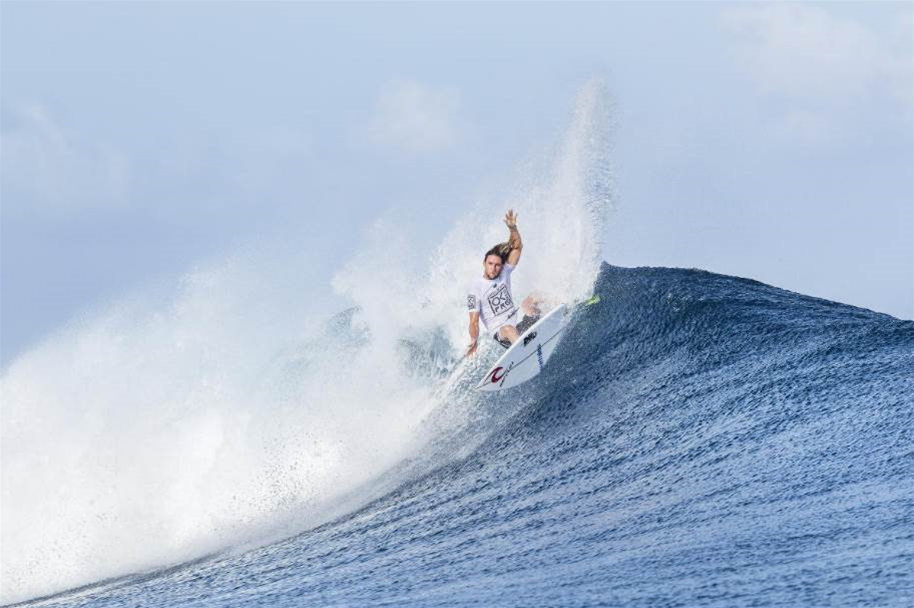 The amount of heats Parko has to win to beat his best ever performance in Fiji. “I feel like I freesurf here well and I really enjoy the wave,” he told Tracks. “Now often it takes more than that to win an event, but it would really be the icing on my career if I could win there. It would definitely be one of my greatest achievements.” With the experience draining from the event as fast as the 80 per cent proof down the Skulldrag snorkel, Parko will have no better chance than in the next few days to cap an incredible career. 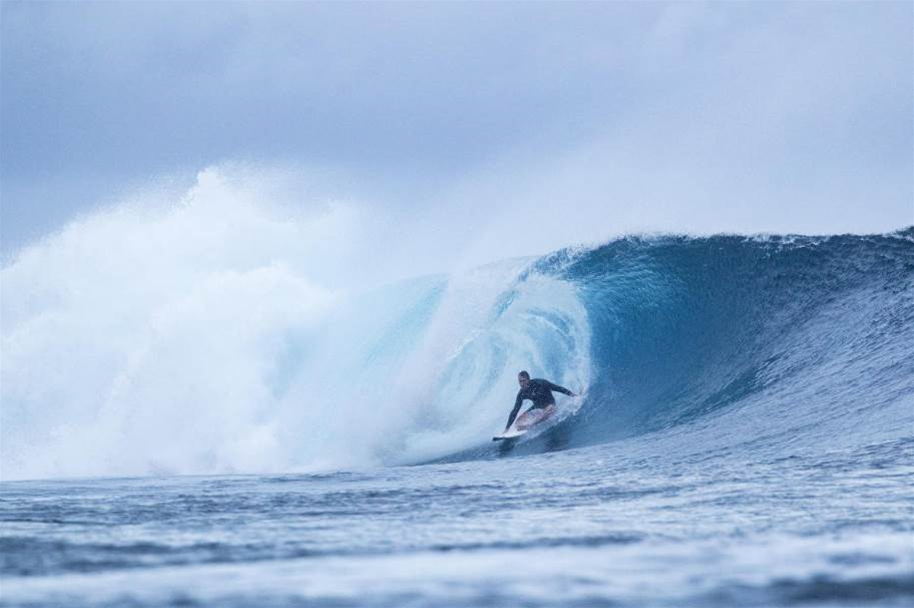 If Parko can keep his mind on surfing rather than fishing, he could get his best result ever in Fiji. Photo: WSL/Cestari

The minimum placing Stu Kennedy can get. He has already has improved on the 25th he scored last year and has been one of the form competitors of the event. The significant board testing done here by both Kelly and himself is paying off, and if turns play as a bigger role as they have in the early rounds, those backhands whips could be deadly. The spray of the outside rail, picked up by the trades, has been found to sting the eyes of the bar guzzlers sitting two miles away at Namotu.
“All my niggas in the club, get Stuey
All my bitches in the club, pop booty...”
Once sang The Pack, to no doubt increasingly smaller and smaller crowds. Still, they might have been onto something with Kennedy in Fiji.

The amount of Facetime calls Commissioner Perrow has put into the chief forecaster over the last eight days. Thursday still looks best, but with the wind changing every time a Fijian farts, and the much needed long period swells failing to funnel up the spout between Australia and New Zealand, it still remains in the laps of the Gods. In Barbarian Days by William Finnegan, the best book ever written about surfing and, yes, I’ve read Mick Fanning’s Surf For Your Life, after a month stint camping alone at a yet to be discovered Tavarua in the ’70s he wrote, “I felt myself floating between two worlds. I was a sunburnt pagan now. I felt privy to mysteries.” KP will be hoping he feels the same. 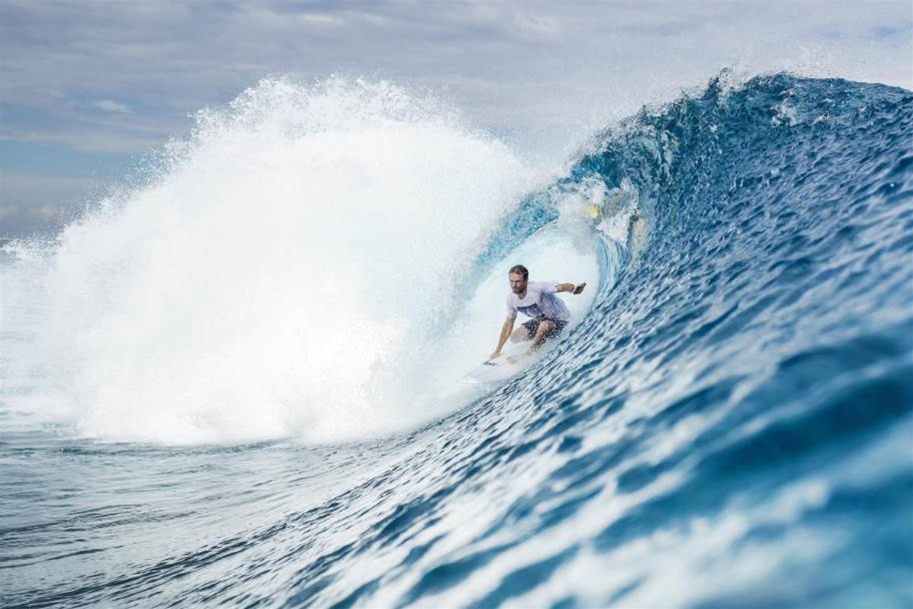 Despite the strees of making the call, there's no doubt KP has been enjoying his lay-days. Photo: WSL/Cestari

While Bede Durbidge’s broken pelvis and internal injuries we were well documented, only 12 months ago having endured three months being bed ridden, the after effects became better known. In 2014 Durbo had undergone a total body scan as part of a PHD by Bond University’s Dr James Furness and so did another post injury to see the scale of change in his body. While the source of his Fijian DNA remained a mystery and the angle of his fliptop head laugh had actually increased beyond 180 degrees, it was determined that he had also lost three kilograms of lean muscle mass and four per cent of his bone density. That Durbo had been able to regain both, within six months, and return to elite level of competition hasn’t perhaps been given the recognition it deserved. A win in Fiji would rank it as one of surfing’s greatest ever injury comebacks. Actually fuck that, it should be already. 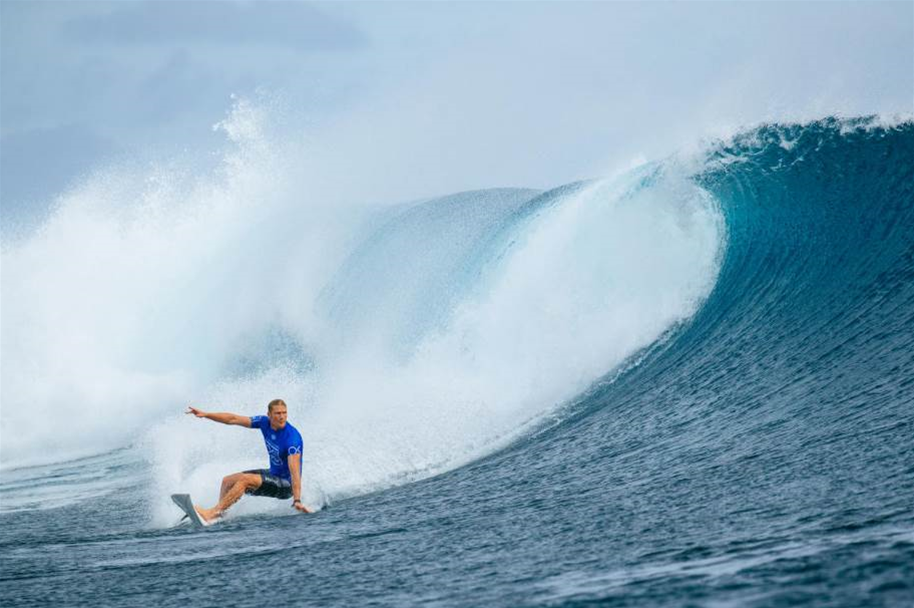 Can Bede take his new found density all the way to a win? Photo: WSL/Sloane

Per cent. Four out of the 12 remaining surfers left in the event are rookies. Fioravanti, O’Leary, Duru and Gouveia have taken out Slater, Medina, Florence, Smith and Wright and have all, at times, looked like they could go all the way. The last CT rookie to win an event was Gabriel Medina back in 2011 (the showoff did it twice that year), reflecting just how difficult a task it is. Sure, we are only just past the third round (on that note when a competition takes nine days to eliminate just 24 surfers the format might need tweaking), but the numbers suggest this is best chance of a rookie win for a very long time. And the numbers don’t lie. Except in this article perhaps, in which every figure I’d advise take with the tiniest pinch of Saxa. 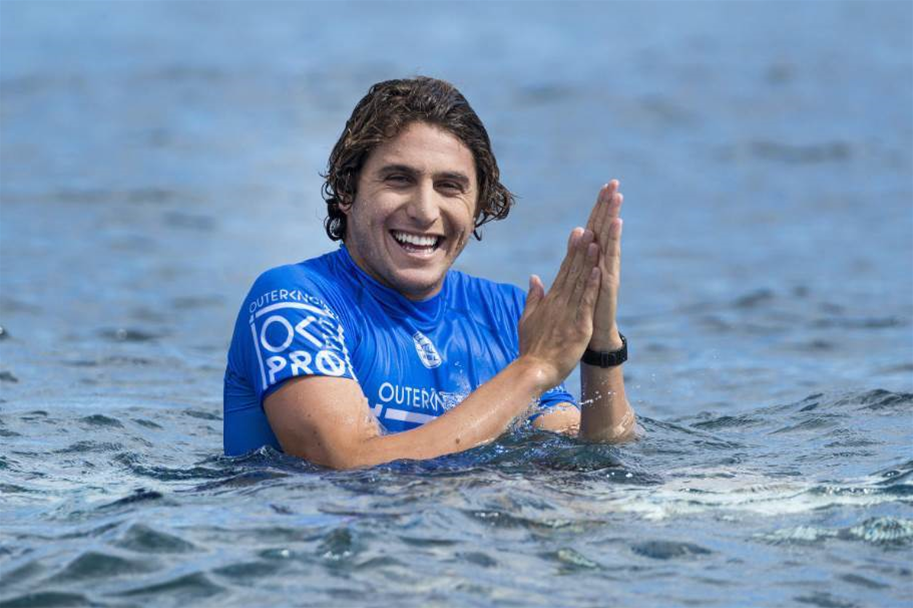 Do you think Leo was happy to break his losing streak? Photo: WSL/Cestari