The Men's and Women’s races will be decided in Hawaii. Here we bust out the Casio to see who needs to do what and where to take home surfing’s biggest prize.

With the Vans Triple Crown starting today we could say the Hawaiian season has officially opened for business. That means we can train our eye on the Pipe and Maui World Title showdowns. Sure, it’s a month away and there’s plenty of QS qualification action ahead, but getting our heads around the scenarios may take some time. So here’s the rundown.
Men’s
The Contenders
Italo, Gabriel, Jordy, Filipe and Kolohe are the five World Title contenders going into Pipe.
After Portugal Italo will wear the Jeep Leader Jersey, having last gained it after the first event.
The top four, the three Brazilians and Jordy, are separated in points by one heat in Pipe.
That means if Italo wins Pipe, or finishes ahead of his rivals, he wins the World Title.
The Scenarios
If Italo gets 2nd, Gabriel and Filipe will need a 1st.
If Italo finishes 3rd, Gabriel will need a 2nd, Filipe and Jordy a 1st.
If Italo 5th, Gabriel needs a 3rd, Filipe 2nd, Jordy 1st.
If Italo 9th, Gabriel needs a 5th, Filipe 3rd, Jordy 2nd, Kolohe 1st.
If Italo 17th/33rd, Gabriel and Filipe will need a 9th, Jordy a 5th, Kolohe a 2nd.
Pipe Form
Only Medina has made the Final at Pipe, winning in 2018 and also bagging runner-up finishes in 2014 and 2015.
In a decade on tour, Jordy Smith’s best result at Pipe was his Semifinal finish in 2018.
Italo and Felipe have both made the Quarters only once, and Toledo’s fifth place was back in 2015. 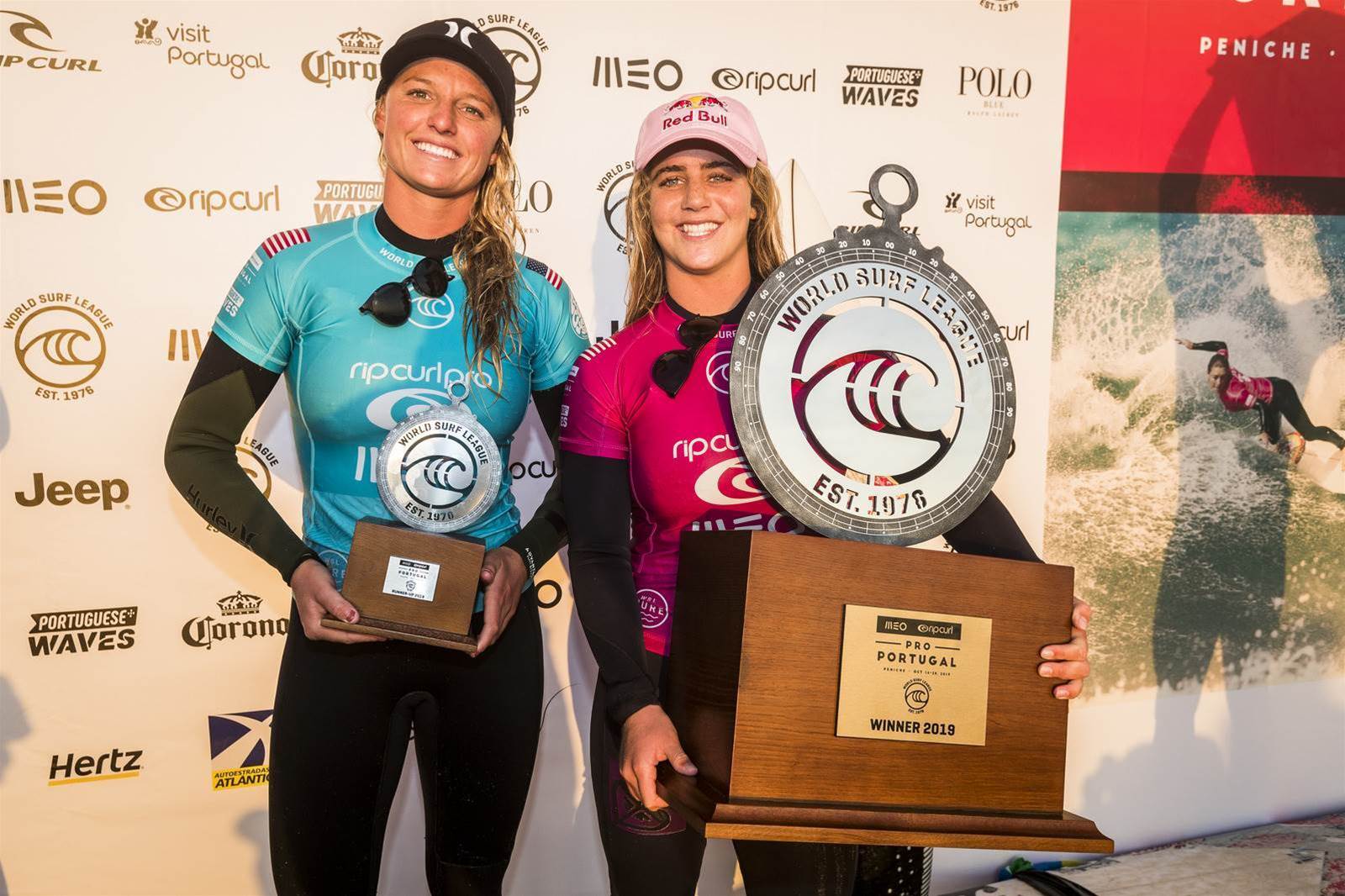 Lakey and Caroline are in contention, but the experienced shadow of Carissa Moore looms large. WSL/Poullenot
Women’s
The Contenders
Carissa Moore, Lakey Peterson and Caroline Marks are the three women in World Title contention heading to the Lululemon Maui Pro.
It is nowhere as tight as the Men’s with 5,000 points separating the three surfers on the Jeep Leaderboard.
No matter what happens the USA will go 1,2,3 for the first time in 38 years.
The Scenarios
If Carissa wins Maui she clinches the World Title and will join Mark Richards with four.
If Carissa gets 2nd Lakey will need a 1st.
If Carissa 3rd Lakey needs a 2nd, Caroline a 1st;
And the last is the perhaps the ideal result for the fans; If Carissa 5th/9th/17th,  Lakey a 3rd and Caroline a 2nd, there will be a sudden death, winner-take-all, three-way tie Surf Off in Maui. Yes, please!
More stats
Caroline Marks and Italo Ferreira shared wins on the Goldy and Peniche.
Lakey Peterson has defeated her nemesis Moore three times this year. The last, in the Semifinal in Peniche, ensured the race went to Hawaii.
Since 2014 Carissa has made four finals at Maui and won three of them. Her worst result in five years at Honolulu was a Quarterfinal finish in 2016.