And yes, it Includes the mind bending Captain Goodvibes cartoon, ‘Hot To Trot’… 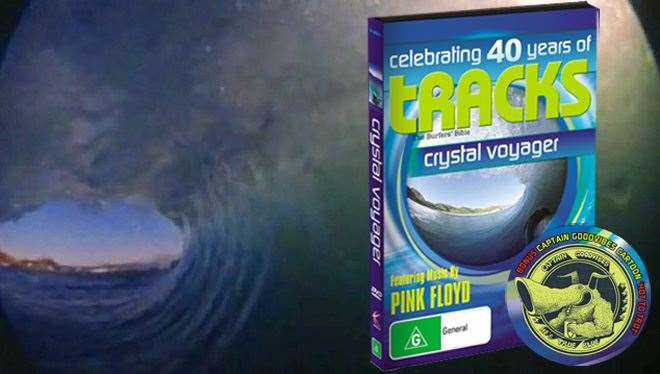 George Greenough's masterpiece “Cryrstal Voyager” and the unfathomable (yet poignant) Captain Goodvibes are back to help celebrate the milestone that is Tracks 40th birthday. Released back in 1972, Crystal Voyager was a movie unlike any other. It took us on a surreal journey deep inside the tube for the very first time. Riding the cortex of waves where time enters a space and zone of its own.

With his revolutionary kneeboard and its elongated fin, George weaved and threaded the deepest barrels ever filmed using his unique back-pack-camera set up (a camera water housing he'd meticulously designed over previous years).

The film (and its psychedelic soundtrack) became a cult hit throughout the world and has now been digitally re-mastered in 5.1 surround sound to perfectly capture that exclusive sound track performed by Pink Floyd.

Crystal Voyager is a must have for any surfer who has both enjoyed reading Tracks magazine and the ongoing quest to surf inside a wave. Tuberiding is the epitome of pure surfing and this film is celebration of this mind-blowing experience surfing offers us.

And then there's Captain Goodvibes. He came, he disgusted, he busted down doors. A grunting groaning shredding pot smoking freak who drunk beer in the barrel and cared little for convention. His 'Hot To Trot' cartoon is the perfect bonus to an already stellar film. This DVD edition also has new packaging in a collectors slip over case.

Plus: Exclusive Tracks subscription offers to all purchasers of the DVD.

Go to: www.mymagazines.com.au to order