It was a bittersweet symphony that played for Adriano de Souza when he faced Dane Reynolds today. Adriano was the obvious favourite in their sudden death round three clash. ADS came here early. It’s a trademark of his. A student of the game, he familiarises himself with a wave, the climate, the rhythms of a day. Unfortunately no amount of preparation could stop the runaway train performance of Dane at Cloudbreak this afternoon.

Dane’s unpredictability in the water has been both his appeal and demise when it comes to contests. But he has tasted success. In 2010 he finished fourth in the world behind Kelly, Jordy, Mick and equal with Taj – though the disposable hero cycle of surf media tends to focus on failures. And Dane’s had his fair share of bad heats. But today he steamrolled Adriano with the kind of surfing we’ve come to expect in his freesurfing act; we saw it most recently in Sampler. Big blowtail turns in the pocket, manhandling chunks of Pacific and striking a fine balance between melting our minds and executing 9-point rides.

Whether he progresses further at this event or not doesn’t really matter. Fiji suits Dane. It’s away from the intrusive eyeballs, media scrums and scrutiny of professional surfing. He’s been staying on Namotu and its isolation from everything has let him bloom. Yesterday he and Surfing Magazine’s Jimmicane took out the final event of ‘sports day’ on Namotu against all the other pro surfers staying on the island. Dane lobbed the last bocce ball of the marathon game square on the white dot to screams, hoots and smiles all round. All or nothing – that’s Dane. In two days he’s defeated two top five surfers – Kerrzy yesterday and de Souza today. But the underserving feeling of victory still plagues him.

“I feel bad for Adriano it’s weird…” said Dane as he trailed off after his heat.

“I don’t know. I don’t want to defend that someone gave me that place or whatever but without the rankings mattering and mattering so much to them. I guess I feel like I’m not quite part of it [the tour] and I feel bad when I beat those guys because it’s probably pretty heartbreaking…they’re trying to win the world title.”

“So it’s a little bit weird in that way but I’m not going to go out there and not try and surf my best.”

As I’m typing his manager, good friend and super caddy Blair Marlin has just taken an underwater skulldrag. He promised he’d commit to the self-harm if Dane got an 18-point heat total. He’s currently horizontal headed for the moon. Meanwhile Adriano is desperately trying to get on the next flight home. It’s a bittersweet Fijian farewell for the Brazilian. He came here the ratings leader; he leaves a broken man. He had his opportunities in that heat. Instead he’s in a familiar yet uncomfortable scenario, a world title, potentially slipping away. All the while the surf-o-sphere is a buzz after one of the best surfers in the world entertained us with one of the greatest shows on earth. 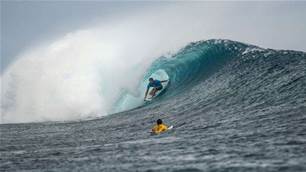 Dane Reynolds is Killing Them Softly at the Fiji Pro