The lost camera, the kid in the picture, and the session where Kelly couldn't stop talking.

In an era of image saturation, it’s easy to forget the effort that often goes into a single, spectacular shot. Try swimming through sharky waters to an offshore reef where shifty, six to eight-foot chunks of ocean are detonating on an unforgiving bottom. Your job as the photog is to get as close as possible to the growling pit, link up with a surfer travelling at high velocity, and capture the fleeting moment. All the while ensuring you don’t get in the surfer’s way or sucked over the falls with the same wave – or smashed by the one behind. That’s not to mention the myriad things that can go wrong with lighting, lens focus, and leaky housings. So when all the elements do come together for a classic water shot, it’s extremely satisfying for the surfer and photographer.

All of the above elements were at play in the shot featuring Sth Coast prodigy, Darcy de Clouett. Look closely at the Insta post immediately below and you can see an orange object hovering right above Darcy’s head like some kind of kamikaze fish. It is in fact the camera housing of Brenden Newton, seconds after he took the main shot above. The moment was captured by noted cinematographer Chris Bryan. Ironically Chris Bryan had sold the ill-fated camera and housing to Brenden a decade earlier.

Yep, that’s a camera stuck in the lip going over the falls.... and that same camera and housing used to belong to me before I sold it to @brendenanewton around 10 years ago.

Fortunately, before Brenden released his grip on the camera, he managed to squeeze a few frames of Darcy gliding through the sublime, blue-lit tunnel.

“I just shot until the last second and then it started to slip me over the falls with my camera,” explains Brenden. “And to save me going over the falls, I let go of my camera because I had a bodyboard leash attached… So I just dolphin kicked through the top of the lip. So I’m still attached to the camera in the shot Chris Bryan took. I remember thinking – right about that time that shot was taken – ‘F$%k, it’s just about to snap!’ It was too quick for me to take pressure off the leash.”

Despite being stretched-slack the leash miraculously held, which meant that Brenden got to keep his camera and his photos, which included Darcy’s pearler and a dozen or so shots of Slater, who happened to be in the water. 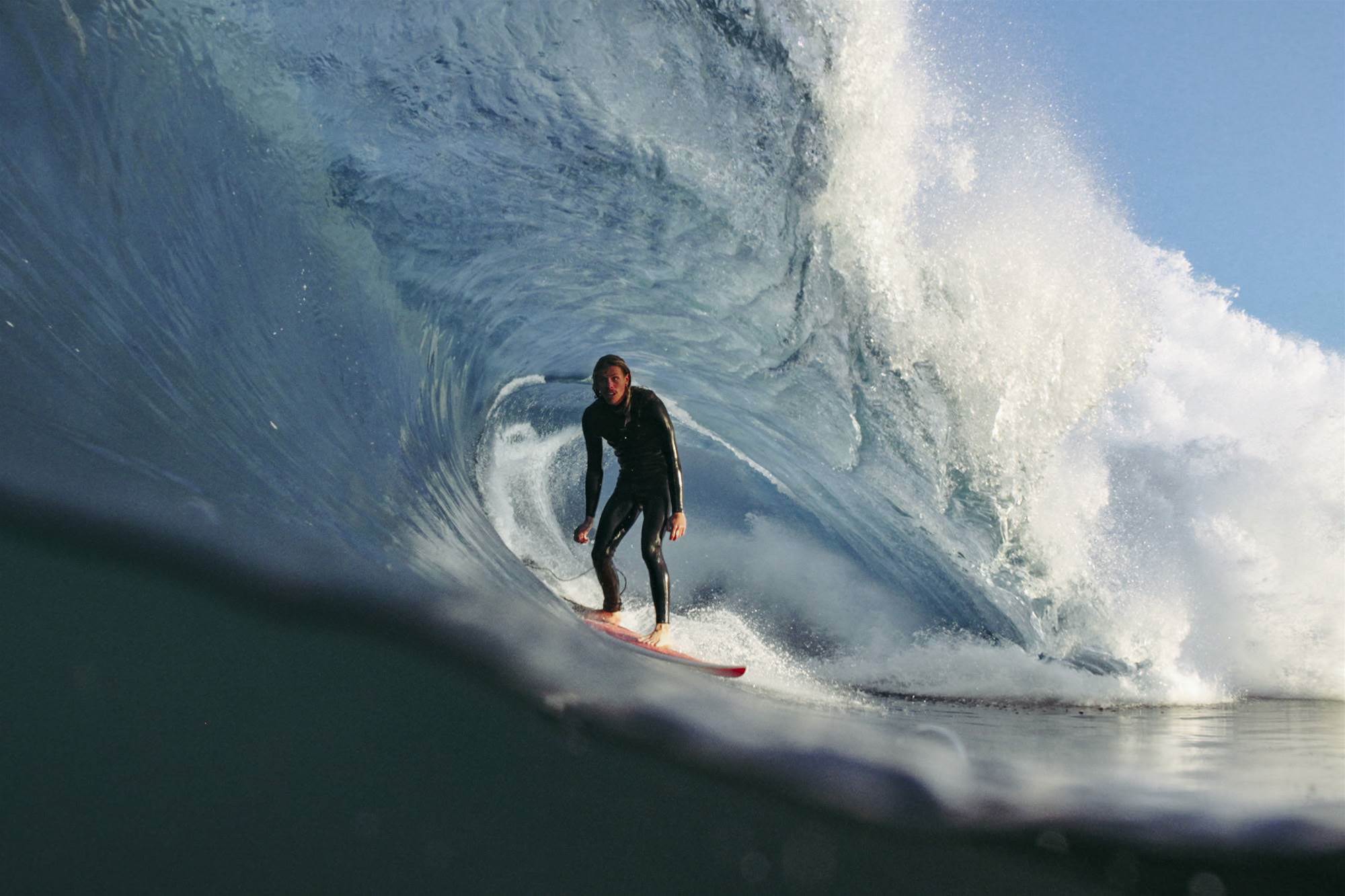 Darcy, moments before the photographer, Brenden Newton, lost his grip on his camera rig.

Darcy admitted that it had been quite a treat to have Kelly randomly manifest at the south coast slab. “ It was insane… he was putting on a bit of a clinic.”

According to Darcy, Kelly, who has been camped out in OZ for months, was relaxed and talkative between waves. “He was heaps chatty. I thought he would have been a little bit stand-offish but he was really down-to-earth… We were talking about fishing and about when he goes down to the Bahamas to go diving and surfing at some uncrowded wave.” 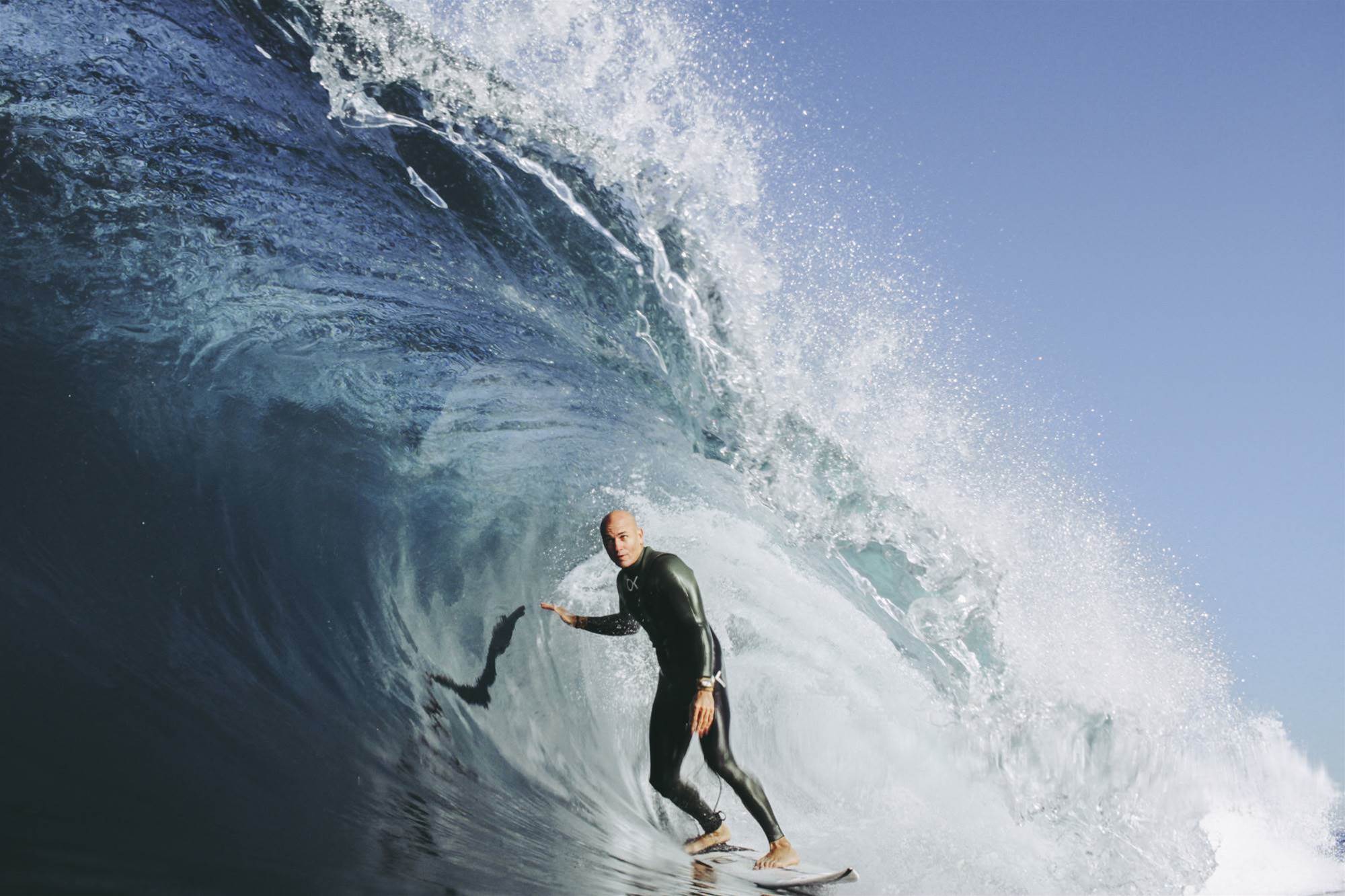 Although Darcy didn’t get the invite to Kelly’s Caribbean secret spot, he was pretty chuffed when Kelly acknowledged his ride, “He gave me a little shaka after, it was sick.”

So the kid stayed in the picture, Kelly ticked off another wave in his surfing odyssey Down Under and photographer Brenden Newton lives to shoot another day.