Choosing a shaper can be the toughest decision of your surfing life, as Seabird Brooks found out the hard way.

I’d been surfing for a couple of years when I finally saved enough for a new stick, but there weren’t many options around. There was the local surf shop, where boards still cost more than I had and the guy who owned it was always fighting with his missus, or there was Doggo’s.

Doggo had a weird reputation. Some guys said he was a twisted genius, that despite his eccentricities he could shape you a custom so good you’d improve just by holding it, while others swore he belonged in an institution, that he was a dodgy prick and about as reliable as a second-hand Daihatsu.

Being fourteen and new to the whole surf scene, I didn’t know who to believe. I went with Doggo in the end solely because Cory Kendall, a ripping local surfer and a guy I would’ve stuck up posters of if there were any, rode his surfboards, and he rode them in a way I could only dream of doing.

I treadlied over to Doggo’s factory one afternoon when the waves were so bad not even us grommets would go out. I had 500 bucks rolled up in my pocket and it made me feel like I was in a gangster movie. I was nervous as all hell. I didn’t know much about Doggo, but from what I’d gathered he wasn’t an easy person to deal with.

He was standing out the front brushing foam from his hair when I arrived. I’d seen him a few times before but he always looked kind of normal, just a wiry bloke around dad’s age with skin like a hippo. ‘G’day,’ he said. That was normal, too.

I said ‘G’day’ back then rushed through telling him why I was there—that I had five hundred bucks and wanted a new board and could he shape me one?

That threw me. I hadn’t been expecting a straight answer. I followed him through his factory and although I’d never been to a place where people made surfboards before, it all looked pretty normal. There were boards and blanks everywhere. There were posters of chicks and big waves on the wall. As I was following him up a set of stairs he was whistling some jazzy tune, and because I was starting to feel less nervous and because I’d also had a long time to think about my first board, I started telling him what I wanted— the tail, the rails, the dimensions. Then I looked up and saw a different Doggo waiting for me. The whistling had stopped.

‘Listen fuck ya,’ he hissed, clamping his hands around my face and pulling it in close to his. ‘You don’t tell me what you want, okay? I tell you what you need. And if you really want a board off me, then that’s what we’re going to get to work finding out.’

The next couple of hours were a blur. I was terrified and at the same time blown away that something so wild could be happening to me. Doggo made me smoke a bong shaped like Buddha and sit in front of the telly while he played My Eyes Won’t Dry (a surf movie, from what I could gather, shot entirely inside the tube). He made me scull a VB and listen to three different sounds at once—Hendrix, whale noises, and some dramatic series of notes he kept whistling from his armchair. He kept telling me he could see my soul. He gave me a skateboard and made me ride down the hill behind his factory blindfolded. I ate shit three-quarters of the way down and rolled to his feet. He yanked me up by my shirt.

When I rode away that afternoon, I was drunk, stoned and bleeding, but in my hazy state of mind, I was convinced he’d shape me the perfect board. As the weeks went by, though, I started to feel less sure. I’d left my number and my five-hundred-hard-earned-grommet-dollars with him, and I was fairly certain that somewhere in the course of our time together, he’d said the board would be ready in two weeks. But two weeks came and went and I didn’t hear anything. Then three weeks went by. By the time I pedalled over there again after a month of anxious waiting, I wasn’t even sure the afternoon we’d spent together had happened. It seemed like something I’d made up in my mind. I was almost convinced there wouldn’t be a board for me.

Doggo was out the front when I rode up, brushing foam from his hair like last time. But that was the only thing like last time. ‘No fucking junk mail!’ he shouted. ‘How many times have I got to tell you?’

I shook my head. I told him I was there to pick up my board.

‘From me?’ He sounded sceptical. ‘You sure you got the right bloke?’

I nodded. How could he not remember me? I’d had pretty much the most memorable experience of my young life with this guy and now he was looking at me like he’d never seen me before. I told him my name. I told him about the Buddha-shaped bong and the beer and My Eyes Won’t Dry and the whale noises, but he just shook his head.

‘Sorry, kid. I don’t know what you’re talking about.’

I was on the verge of tears. It’d taken me the better part of two years to save that money, and now all I had to show for it was a couple of half-healed scabs on my knees. I pointed at them.

He stared at me. ‘You were the kid who ate shit on the skateboard?’

We walked through his factory to a room I hadn’t seen on my last visit. It was full of shiny new boards. I hoped he wouldn’t say anything out about me crying.

‘Here,’ he said, taking one by the rail and pulling it out.

Already I could see it was nothing like the board I’d imagined for myself, but after the ordeal I’d just been through, I wasn’t game to do anything but grab it off him.

‘Hold up,’ he said, as I was hurrying out of the room. I turned around. ‘You’ll need this.’

He tossed me a block of wax. I looked at it and looked at him and when he gave
me a cheeky grin, I got the hell out of there. Walking down to the shore later that afternoon, I was convinced the board wouldn’t go. It was so different to what
I’d pictured. It had a swallow tail, not a rounded-square. It was short and wide when I’d wanted narrow and sleek. You’ve kooked it, I thought. You should’ve listened. Then someone called out to me. I turned around and saw Cory Kendall jogging my way. It was the first time he’d ever noticed me.

I told him I hadn’t ridden it yet. I told him I didn’t think it’d go good at all but that I was lucky to have gotten anything off him in the end.

He laughed. ‘Did he put you in the clothes dryer?’

I shook my head.

‘Did he make you rub tiger balm on your balls and see how long you could stand up for?’

I shook it again.

He laughed again, then he took the board from me and started looking it over. ‘I snapped my wrist doing that one time.’

‘Because of this,’ he said, tapping my board with his finger and handing it back to me. ‘Doggo magic.’ He bent down and picked up his board. ‘Come on, we’re out there.’ 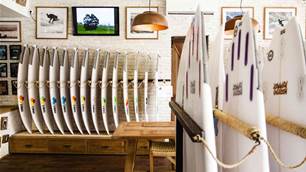