How the Holmes Family formed a great friendship with Hawaii's most famous waterman.

In the early 1970’s renowned Australian surfer and shaper, Darryl Holmes, set off from Sydney on a surfing odyssey to Africa with his surfing wife Lyn and their three-year-old daughter, Tracey. Departing from Sydney, the family travelled aboard the Italian boat the Galileo.

With no plans other than going surfing, they ended up living in the coastal city of Durban, South Africa for four years.

During the first week of their extended stay Lynn, the two-time Manly Pacific Club Champion, was out surfing when local board maker, Max Wetteland, offered her a job working in a surf shop. At around the same time, Daryl started making surfboards with his brother, who was also living in Durban.

In those days apartheid was in full swing in most of South Africa. Speaking to Darryl and Lyn they explained that in a town like Durban, which was a surfing enclave, apartheid wasn’t as stringently enforced as in the larger cities. However, there was still a deep chasm between the way whites and blacks were treated.

In 1972 Hawaiian Clyde Aikau was invited to be part of the American/Hawaiian surf team to compete in the Gunston 500 contest on an ‘honorary white visa’. This contest was founded in 1969 by Shaun Tomson’s father, Ernie, and a couple of his friends, and started out as the Durban 500 Surfing Contest. With a new lung-busting sponsor (Gunston were a popular cigarette brand) the contest changed its name in 1971 to the Gunston 500 – an event which the great South African surfer, Shaun Tomson, ultimately won six times. 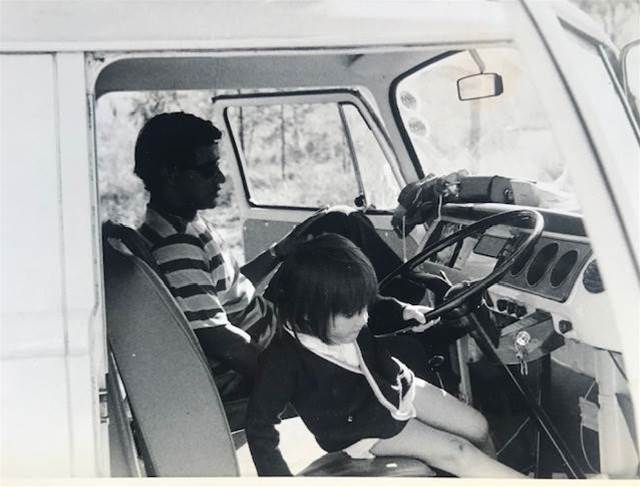 Darryl competed in the event while he lived in Durban. The contest has since changed its name again to the Ballito Pro, and is one of the world’s longest-running professional surfing contests.

Clyde, unfortunately, got injured and could not compete and his older brother Eddie was invited to take his place. Eddie was a Hawaiian lifeguard and revered big wave surfer at Waimea Bay on the island of Oahu. In his capacity as a lifeguard, he saved over 500 people and became renowned for surfing gigantic Hawaiian waves and winning several events including the 1977 Duke Kahanamoku Invitational Surfing Championship. 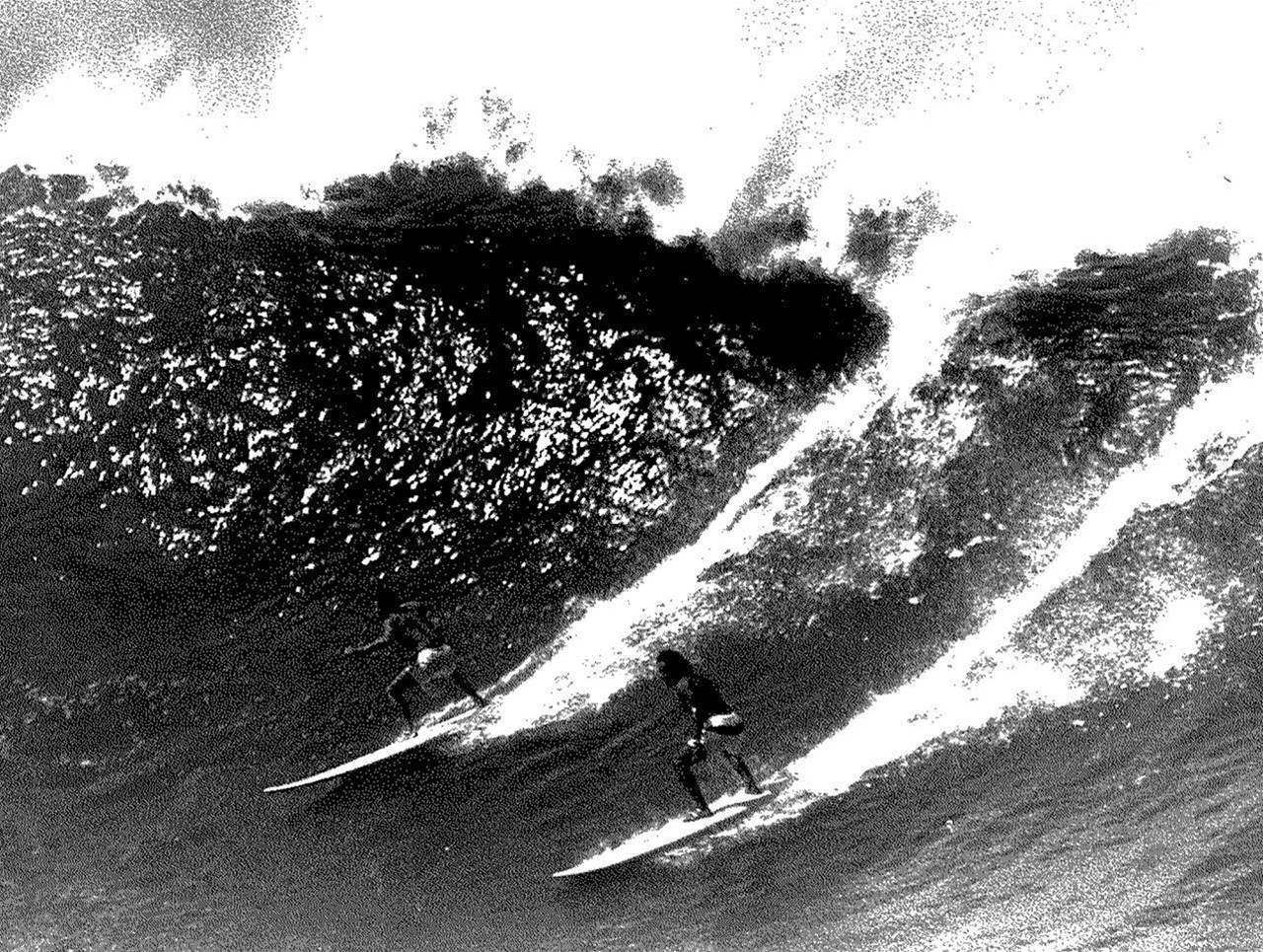 Eddie Aikau on the inside at his favourite stomping ground, Waimea Bay.

Eddie arrived a little later than the rest of his teammates who were already ensconced in their hotel. When he arrived in Durban he went to join the team at the hotel, but due to his dark skin colour, he was immediately escorted out of the ‘whites-only hotel’.

Eddie would’ve been welcome to stay at the Tomson’s family home but just before the contest started they had a fire in their house and also ended up staying in a hotel. 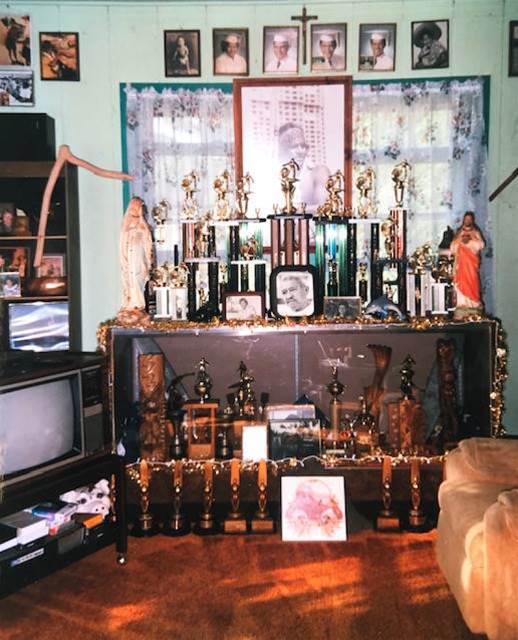 So Ernie Tomson, the organiser of the contest, arranged Eddie Aikau a hotel that would take him in. However, Eddie was isolated, a long way from home, and felt his teammates had in some way deserted him. After he’d surf in his heat he would just disappear back to his hotel. Aikau was virtually friendless and was so confused as to where he could go and what he was allowed to do under the barbaric apartheid laws.

Fortunately, Eddie’s Durban blues were short-lived because of Lynn Holmes, who was yet to meet him but had heard of his predicament. Lynn paid Eddie a visit at his hotel and invited him to stay with her family for the remainder of his time in Africa. Eddie and the Holmes family quickly formed a close bond and she threw him a big party after he and Daryl were knocked out of the contest. Aikau only had a two-week visa, so with no time to waste the next morning, Darryl and Lyn, together with their two young daughters (Tracey and Jodi), invited him on an epic and memorable road trip to Jefferies Bay. The trip cemented a connection with the Holmes and Aikau families that would last a lifetime. 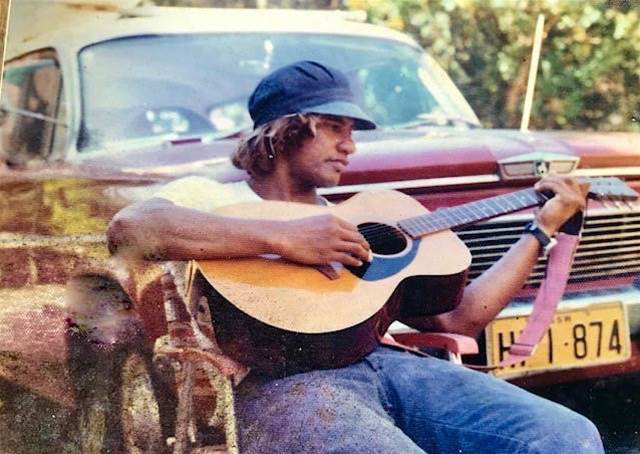 Eddie strumming his guitar during a trip to Australia to visit the Holmes family.

Travelling in a Kombi filled with a multitude of surfboards, it was a bumpy, 600-kilometre adventure to Jefferies Bay, which was already a melting pot for surfers from around the world. Fortunately, the surf gods turned on magnificent waves for the entire two weeks they were there. The surf varied in size from 2-4 metres and Aikau revelled in the quality waves. They spent the remainder of their trip surfing, playing music and going out for dinners. 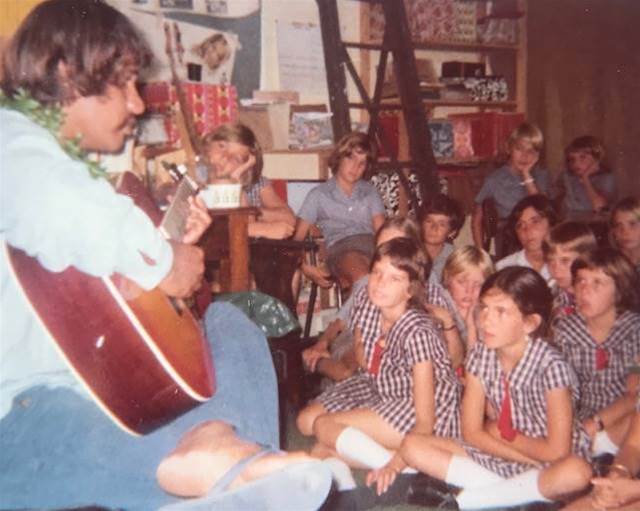 Eddie playing for the school kids on a trip to Australia.

Apparently when it was time for Aikau to go home the tears flowed and when he got back to Hawaii he wrote a song about some of the best times of his life and the family who had taken him in. He even recorded it on a tape that had been given to him by Lynn. (See the clip above) 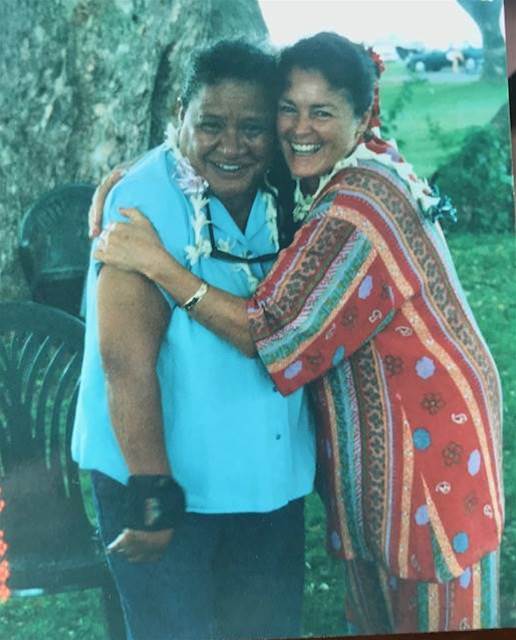 When Eddie returned to Hawaii he told his family of the love and hospitality that the Holmes family had extended to him and soon a multitude of letters and phone calls started arriving in South Africa for Darryl and Lyn from the Aikau’s. In one piece of correspondence ‘Pops Aikau’, insisted they come and live with them in Hawaii.

And so it wasn’t long after that invitation from Pops Aikau that the wandering Holmes family left Durban. After four wonderful years, they were on their way to Hawaii to live with the most loved, adored and respected Hawaiian family, the Aikaus. 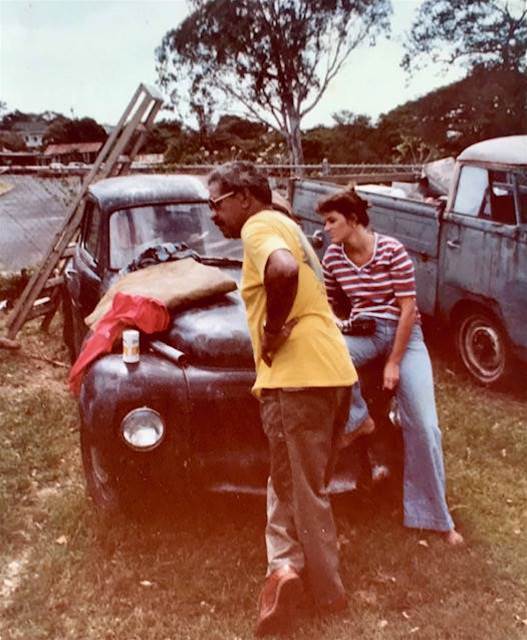 The Aikaus lived and managed a Chinese Cemetery in Honolulu; it was a huge 2.5-hectare parcel of land. All the Aikaus lived there including Eddie and his then-wife Linda, brothers Fred, Gerald Clyde, sister Myra, Pops and Mum Aikau along with Darryl, Lyn and the kids who had their own house on the site.

While in Hawaii, Darryl made boards in the same factory as Hawaiian legends Gerry Lopez (who he used to surf and sail catamarans with) and Ben Aipa. In those days Aikau and Shaun Tomson were surfing on boards that were shaped by Holmes. 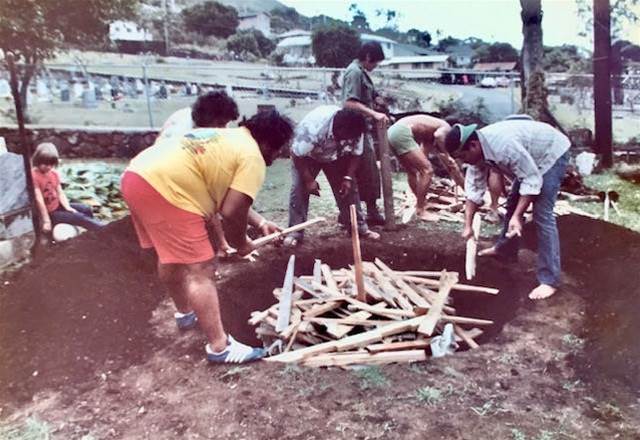 The Aikau family preparing a feast.

After an unbelievable six months with the Aikaus, which involved surfing all around the islands, the family moved back to Sydney. Over the next few years, Eddie Aikau twice made the trip to Australia to visit his favourite family. They were devastated in 1978 when the terrible news came through that Eddie had been reported missing at sea in Hawaii. 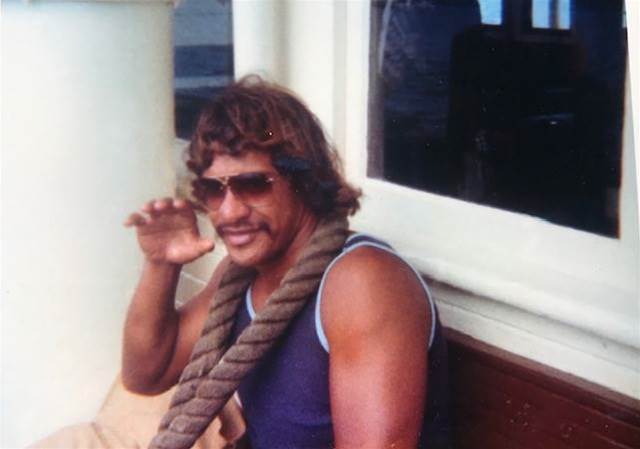 Eddie on the Manly Ferry during one of his visits to Australia.

31-year-old Eddie Aikau had joined the Polynesian Voyaging Society’s quest to recreate the journey of ancient Polynesians. The trip was intended to be a 30-day, 4023-kilometre sail from Hawaii through the Tahitian islands, following the route once taken by the Polynesian migrants to Hawaii. The manned Hokule’a left the Hawaiian Islands on March 16, 1978. 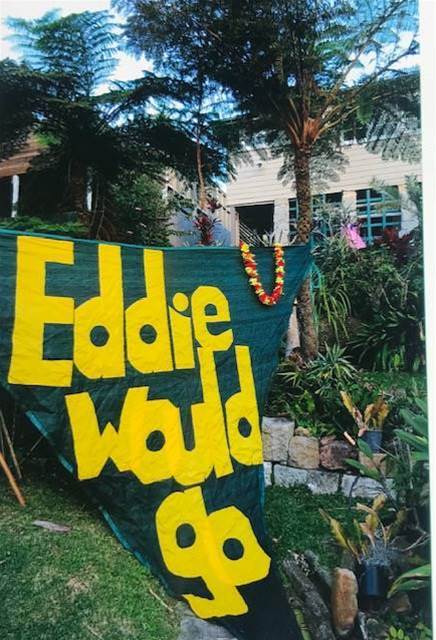 The words, which have helped immortalise Eddie Aikau.

It’s well documented that the Hokule’a catamaran, which Eddie was a passenger on for the re-enactment voyage, capsized the first night in heavy seas. While everyone was floundering in the ocean on the upturned vessel, Eddie convinced the skipper to allow him to paddle for help. Tragically he was never seen again.

At the time Darryl was back in Africa shaping boards for Shaun Tomson. After being made aware of Eddie's situation, he immediately flew to Hawaii. Meanwhile, Lyn, who was in Australia, was on the first flight from Sydney to Hawaii to support the family when she heard the news from Eddie’s sister. When they reached Hawaii the Aikaus wanted Lynn and Daryl to stay in Eddie’s home while they all waited for news on Hawaii’s favourite son.

The surfing community prayed for Eddie’s safe return, but sadly it never eventuated.

To this day Eddie Aikau is spoken of with profound love and respect and remains one of surfing’s most revered figures.

The Eddie Aikau Big Wave Invitational event, which has been run nine times in epic waves, helps to ensure that Eddie’s legacy is never forgotten.

Meanwhile, Darryl and Lynn Holmes to this day remember the period they spent with Eddie Aikau and his family as some of the greatest times in their lives.