Richie Lovett said it best, halfway through the men’s final after Ethan Ewing had just obliterated another crumbling Cabarita lip, “I’m so excited for Australian surfing because we have a legitimate contender here.” By contender, Richie meant that when regular competition resumes, Ethan has every reason to consider himself capable of claiming surfing’s ultimate prize – a world title.

The superlatives flowed from a frothing commentary box as Ethan took down tenacious, South African scrapper Mathew McGillivary in the final. Ewing combined perfect technique with an indefinable x-factor to produce a beguiling display of surfing in the Tweed Coast Pro. There were moments where you couldn’t help but think ‘Wow, that’s just how a wave should be ridden’.

En route to the winner’s dais, Ewing accounted for Owen Wright and Connor O’Leary with the same brand of near-seamless power surfing.

Ewing may have stumbled in his first foray onto the CT but he now appears to be a much more mature surfer – capable of decimating opposition with raw talent but also doing what’s necessary to win in tough situations, without succumbing to his inner perfectionist.

Matt McGillivary proved he should never be underestimated. In the semi-final against Jack Robinson, he staged a bold comeback when it seemed Robbo had already rotated to victory. Despite the skinny field, a semi-final birth is a positive result for Robbo, who has faced question marks over his surfing in soft, three-foot point-breaks. Robbo answered critics of his small wave act with a performance that combined crisp surfing with A-grade rotations.

In the women’s event, a rested and reinvigorated Tyler Wright had been the form surfer of the event and didn’t disappoint in the final against Steph Gilmore. Riding new boards (Pyzels) Wright looked light on her feet, zippy and focused; arguably producing some of her best-ever surfing in a competition setting.

Post-heat, Wright immediately identified her commitment to the ‘black lives matter’ cause as a driving force behind her victory. It was refreshing to see a professional surfer take a forthright political stance rather than wait for the lay-up questions and deliver the usual fence-sitting responses.

What then is to be said for the WSL’s Cabarita COVID-era experiment? Two-foot Caba is never going to blow minds, but it was undeniably enjoyable to see the world’s best back in jerseys – at a real beach. The performances of Wright and Ewing certainly reminded fans that watching pro surfers perform at their peak can be a truly uplifting experience.

However, the WSL will need to do better with wave quality if they don’t want fans to become disinterested. Hopefully, the conditions will be better for their next experimental event. If they are not, then the WSL risk cheapening the value of their brand. It’s not an easy time, but that doesn’t mean we can’t expect the WSL to be ambitious with where they stage events.

As the commentators made clear, the two-day format and limited field make for greater flexibility and easier viewing than a dragged out event. Maybe the other big risk for the WSL is that a highly successful, two-day contest with pumping waves might make the regular system look a little redundant.

That said; before we start ripping things to pieces, perhaps we should be content to momentarily reflect on the performances of Ewing and Wright and take solace in the fact that surfing as a professional sport is still alive. 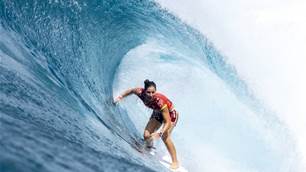