How Kelly’s Bali holiday became a high-speed, Indo odyssey. From the pages of Tracks Issue #578

Troy Sinclair typically spends his days running his resort, Batu Karang, on the island of Nusa Lembongan. It’s a sweet gig but things had been a little slow on account of COVID and the corresponding tourist restrictions. Troy decided it was a good time to follow up on a little boat project he’d been working on. He figured chartering a boat could provide him with an alternative income stream in hard times. Meanwhile, the surfer in him dreamed of owning a high-speed vessel that would transport him to any of Indonesia’s best waves on a whim.

You see this was no ordinary runabout. It was a repurposed Russian special forces, navy strike boat; 12 metres of sleekly engineered, high-powered marine transport with a top speed of 55 knots and a cruising speed of 38-40 knots.

Once he’d purchased the new boat, Troy was like a kid with a new toy and began conducting speed trials around the archipelago. He soon figured out he could get from his dock on Lembongan to Desert Point on Lombok in 35 minutes. If he picked up passengers from Serangan in Bali it only added another 20 minutes. G-land in east Java was an hour-forty-five on a good run and Sumbawa was less than four hours away. The boat also came fully equipped with infra-red cameras and sophisticated sonar, so you could surf all day and come home after dark. Invariably, the boat which was soon dubbed the KaikoaIndonesia, radically redefined the scope of Troy’s surfing universe. 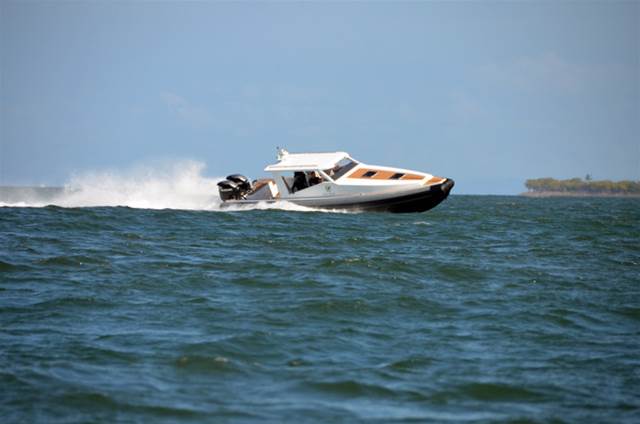 Travelling aboard Troy Sinclair's KaikoaIndonesia, Kelly had high-speed access to much of Indo.

Cut loose from his gig as a WSL commentator, Strider Wasilewski was in Bali to enjoy a spell riding waves instead of talking about everyone else’s. It wasn’t long before he heard about Troy’s fabulous new fast boat from a mutual friend of theirs, Nick Chong. Strider signed on for a trip straight away. A Grajagan swell was looming and initially, the plan was for a fella by the name of Kelly Slater to arrive in Bali and jump on board the G-land strike mission. However, Kelly missed a flight and consequently wasn’t part of the crew that scored six to eight-foot firing G-land with only half a dozen out. By the time Kelly eventually landed in Bali, Strider was still raving about his magic day in G-land and Troy Sinclair’s phone was ringing off the hook.

When the next promising swell began marching towards the archipelago, Kelly locked in a slot on the boat alongside Strider and Nick Chong with Troy at the helm. On a clear, September morning, Kelly and Strider showed up at Serangan Port, hell-bent on scoring memorable waves in some exotic corner of Indo. Like good schoolboys, Kelly and Strider came equipped with packed lunches. Given the variables in individual dietary preferences these days, Troy doesn’t bother catering for guests on the boat. Instead, he just tells everyone to bring their own stash of grub. Mind you, he does make sure there is a 220 litre, Yeti Esky on board. “That’s 180 cans of beer with a 2:1 ice to beer ratio,”…. he says with a chuckle over our facetime call. 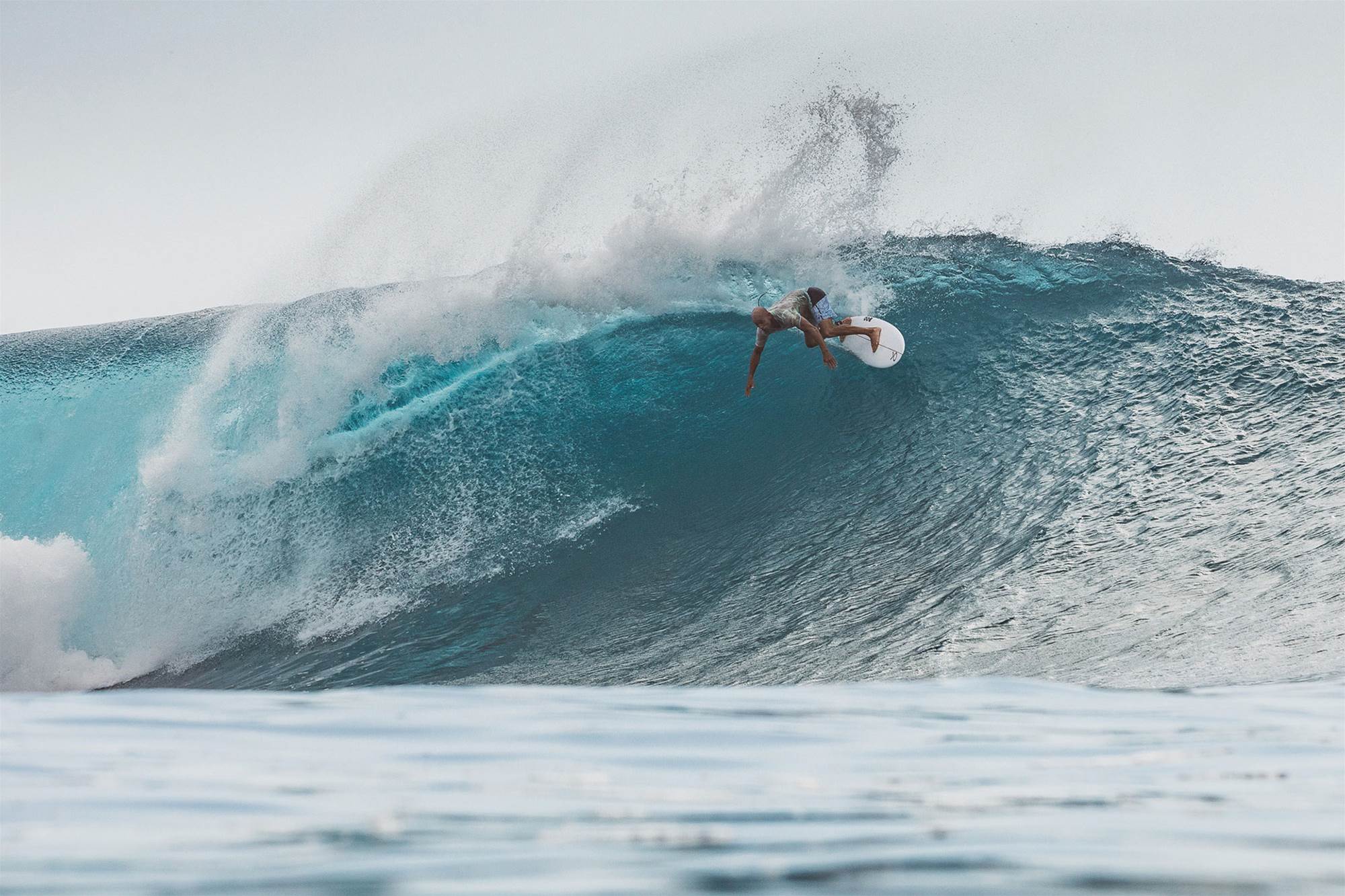 Troy and Kelly had met before through Kelly’s long-term board caddy and confidant, Stephen Bell aka ‘Belly’. According to Troy, it didn’t take Kelly long to slip into mischievous prankster mode. “As soon as he got on the boat he was like, ‘I’ve got all Belly’s codes to his garage and his alarms in his house, should we just ping him? ’.” The convivial mood continued with a relaxed Kelly eager to participate in the jocular banter on board.

“If you can picture it, it was Strider and Kelly; two good mates just giving it to each other and not holding back, and then you throw me and my mate Nick Chong into the mix and it becomes one of those classic boy’s trips where you don’t let your guard down for a second and no-one was off-limits.”

“He’s one of the guys. He takes shit and he gives it. If you slate him, he’ll slate you back and he’s quick off the bat too,” explains Troy.
“I remember asking my crew captain for a knife at one point and straight away Kelly was like, ‘That’s not a knife’ straight into his best Crocodile Dundee accent, sledging me from left field.”
Having the best surfer in history on your boat – no matter how buoyant the atmosphere – still comes with an inherent level of pressure. At one point Troy feared he had blown the whole day after he made a hasty call to take an alternate route.

Going to Sumbawa via the north of Lombok means travelling a longer distance but it’s basically a guaranteed flat-water ride.

Eager to reach their destination on the island of Sumbawa, Troy elected to travel around the south of Lombok after departing from Serangan in Bali. “The swell wasn’t due through until the afternoon,” explained Troy. “But as we went around the bottom, we got a squall that came through and it pulled the swell in, and yeah, that was when I went ‘Oh my god, here we go, I’ve played the wrong card here. I should have gone around the top of Lombok’… We had a three and a half metre swell and 18-knot winds coming at our bow. It was totally safe, but we got pretty battered… Kelly didn’t say anything to me at the time, but he went pretty quiet and he later said to someone else that it was pretty heavy.”

Having endured the joint-jarring bump and slap of heavy seas, Troy and the crew reached the designated location some three hours after departure. The swell direction was set to be perfectly aligned for a particular left-hand reef that is well known but not commonly celebrated in the modern era of Indo wave plundering. If Troy’s navigational decisions had been a little awry at least his swell predictions were spot on. Upon arrival, it was six feet and building without a soul around. Troy was the first overboard, equipped with his trusty Christensen 6’6” Carrera quad. 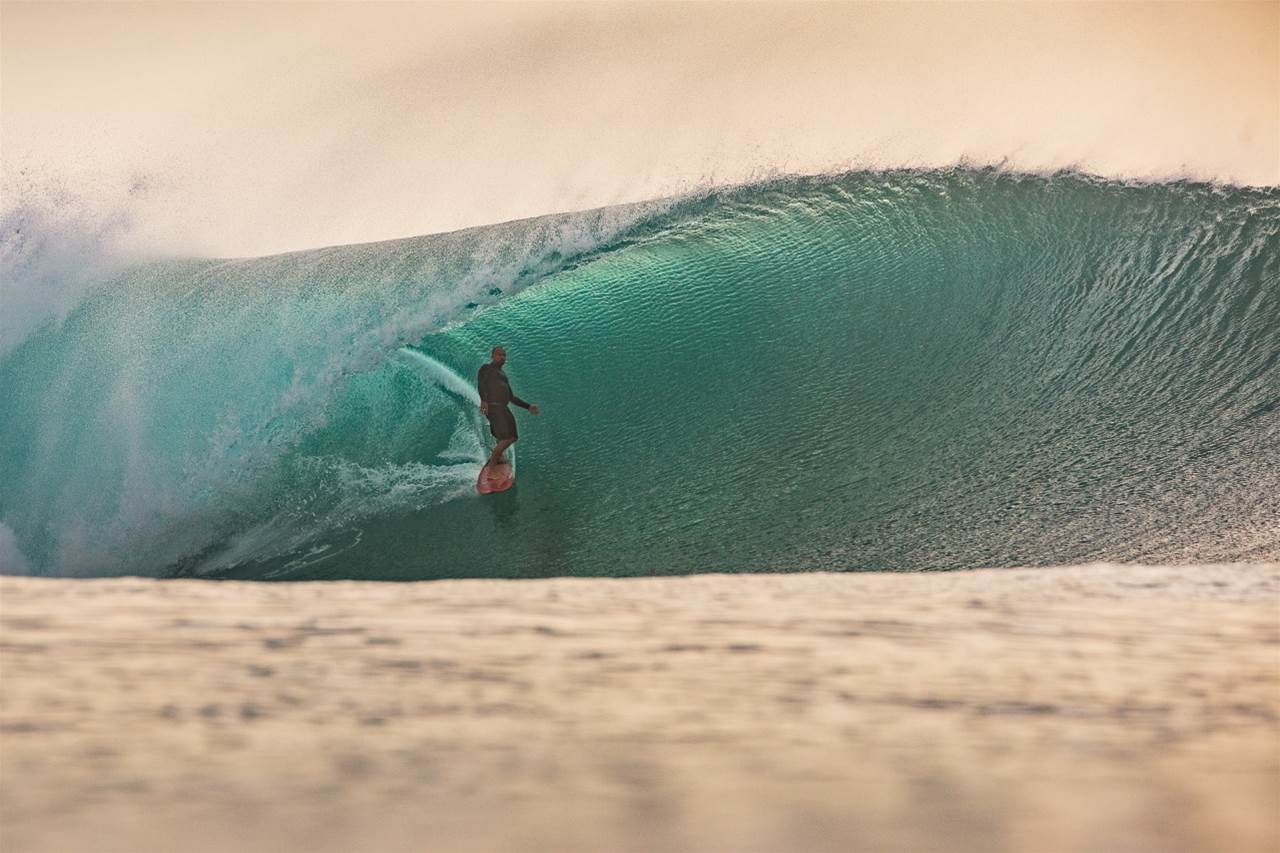 A little bruised and fatigued by the journey the rest of the crew elected to recover on board while Troy, an accomplished goofy-footer with 15 years of Indo experience, enjoyed an hour and a half of writhing six-foot barrels all by himself. As the swell grew and the eight-foot sets began rolling through, Kelly was the first to join him. And so ensued a one and a half-hour session where Troy shared a reeling, Indo lineup with the greatest surfer ever to bury his toes in a bead of wax. While the growing swell commanded his focus, Troy concedes there were a few moments where he had to pinch himself to make sure it was all real.

“It was pretty radical. I was sitting out there going, to have this by myself was great, but to have this for an hour and a half with the G.O.A.T. – are you serious?’

Between sets, Troy and Kelly chatted freely about everything from wave pools to the nuances of the break they were surfing. Meanwhile, a gentleman’s approach was adopted to determine who had the next wave. “It was very much ‘do you want this one?’ ‘Nah you have it’. There was definitely no hassling or heckling,” insists Troy.

Instagram archives show Strider and the crew slipping into commentary mode, cheekily labelling Troy the ‘current heat leader’, just after Kelly had joined him in the lineup. “Of course, it wasn’t long till he caught up,” declares Troy.

For Troy, it was an opportunity to witness the wizardry of Slater at close quarters. “When I started really paying attention it was like, look what he’s doing and where he’s doing it on the wave. He’s doing that there and doing it so smoothly that it almost doesn’t look technical or hard… Once you start processing it you go what the F&*k?”

Troy concedes when you are all alone in the water with Kelly, the ego ramps up and you feel compelled to step things up a notch. “I pulled into this thing with Kelly watching and I thought ‘Oh my God I’m dead.’ I got swatted right in front of him and when I came up, he was like, ‘bro’ holy shit are you ok’?”

By late in the afternoon the swell was a solid eight feet with 10-foot sets. The five surfers on board Troy’s boat had been joined by only one other person in the lineup, a lone, stoic figure who had paddled out from land. As Troy sat with them in the lineup, Kelly and Strider couldn’t disguise their excitement about the waves they were scoring. “They were paddling back out going. ‘These waves are like standing in Pipeline or Teahupoo’.”

Perhaps the defining moment came when darkness loomed, and the biggest set of the day rolled through. “We’ve all just started scratching for the horizon and were literally clawing vertically up this wave thinking ‘Oh my God I’ve got to get over this'," remembers Troy. "And halfway up, Kelly just swings and falls out of the air and takes it. And we were like ‘did that just happen’?”

After an eventful crossing and a memorable six-to-10 foot session the exhausted crew spent the night in accommodation at nearby Maluk. The next morning they rode draining funnels at Super-Suck and capped the epic two-day odyssey with a session at Desert Point on the way home.

Kelly jumped on board Troy’s boat for another four or five trips after the initial strike mission. A couple of times Troy had to politely knock-back Kelly because the boat was already booked out. However, Troy is at pains to point out that each time he was on board Kelly was gregarious and engaging, even when travelling with people he didn’t know. “He was a regular guy and always made an effort to talk to people… He was very open and very cool with his chats… Obviously, they were private conversations. But for someone of that prominence, I thought he might play his cards a little closer to his chest… I’ve certainly had experiences with other high calibre individuals who don’t really have those conversations. In hindsight, Kelly’s Indo sabbatical was undoubtedly one of the more curious COVID-inspired, sub-plots. It was like a surfing deity descending on Bali, the Island of the Gods, and then hot-footing his way around the archipelago for a couple of months.

However, while Kelly certainly made his presence felt, he might have been hard-pressed to match Troy for the award of the most barrelled surfer in the archipelago in 2020. “What I did last year in that boat. Never again, I'll never get that again. I mean, I'm telling you every single swell. It would be ‘what's the swell direction? The tide? Okay, well, that's ideal for this spot’. And we would just get in and go and we'd be there for a day with surfers, and we’d come back and then sometimes I’d go back the next day with a different crew. I was just constantly on that boat pulling up to pumping waves. I mean, I just don't know when that's gonna happen again.” 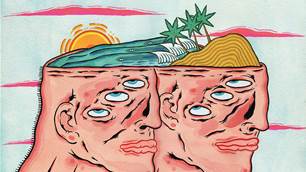