So much love for Ferreira, so much sympathy for Kolohe. Meanwhile Jordy is back and Caroline KO’s Carissa.

In one dizzy week of competition at D’bah, Italo Ferreira has soared way above the rest. In claiming the Red Bull Airborne event and the Quiksilver Pro, Italo has proven that he is not only worthy of the WCT yellow jersey, but also arguably the best aerialist in the world.

In the Red Bull Airborne event he trumped a hand-picked gathering of the world’s best free-surfers ( including Chippa Wilson, Matt Meola and Noa Deane) while today a composed Kolohe Andino was the final victim of Italo’s ostentatious aerial attack. For his historical double win, Italo picked up a cool US $120 000. Not bad for a week’s work as a pilot.

In the final Kolohe Andino started well, utilising the northerly puff to drift through a polished front-side air reverse. Kolohe had looked slick all event, dialling in the rotations at will and backing them up with crisp surfing on the face. His approach to the final was no different, but unless Kolohe could summon something just a little bit more special he would always be vulnerable to Italo’s arsenal of airs.

For much of the final it seemed like Kolohe’s consistent approach might pay off. When he backed up another classy spin with a series of front-side snaps that landed him in the shorey amongst the frolicking grommets, the decision to milk the wave seemed worthy and he was rewarded with a 5.93.

Meanwhile, after landing his first jump for a 5.50 Italo’s aerial ability temporarily deserted him so he defaulted to the fin chuck – a kind of backside spinning karate kick with a surfboard attached. However it only mildly impressed a judging panel that had stated they would be focussing on the part of the criteria which asked for progression. Kolohe extended his lead with a more lofted, tail-high rotation but the 6.5 still left the human chopper blade well within striking distance. With a sideshore zephyr blowing into the rights and three-foot tee-pees scattered up and down the beach it was inevitable that an in form Italo would eventually ride out of one his more ridiculous rotations. While the varials and the shove-its didn’t stick, Italo whirled like a Dervish one more time and stuck a cloud snatcher backside rotation for a 7.07. With only a few more minutes to go Kolohe was again left to play WCT brides maid at the Quiksilver Pro (the fourth time he’d lost a final and the second time at the Quiksilver pro Gold Coast) Commiserations to Kolohe who surfed a smart contest but perhaps needs to learn how to make a quantum leap to a higher level for finals. Strategy and consistency might get you there but at some point you have to be exceptional. 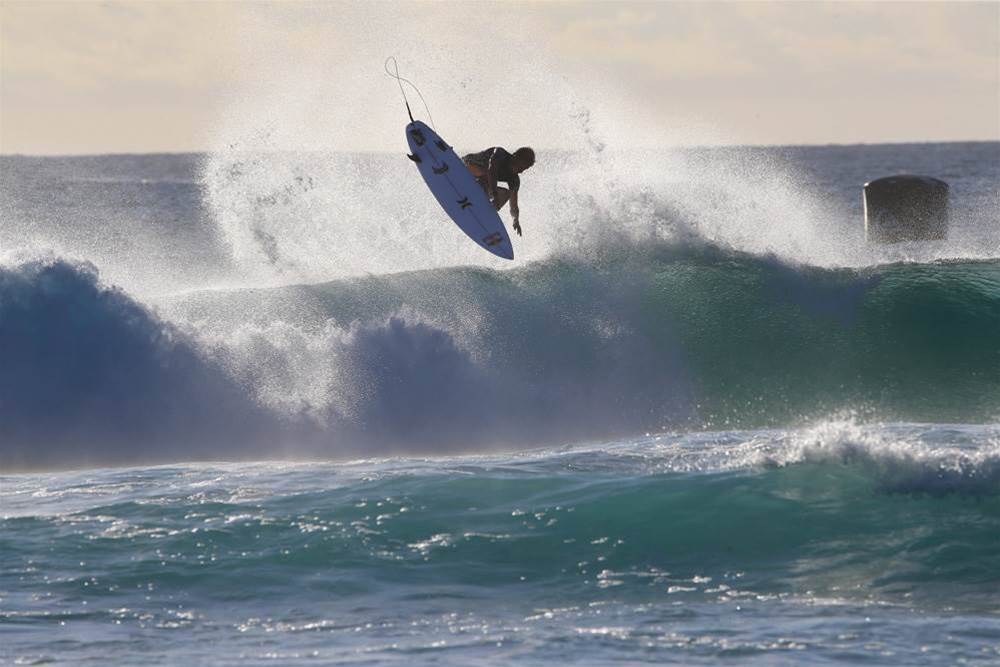 Commiserations to Kolohe who finished runner-up in the Quik Pro for the second time. Photo: Swilly

As Italo arrived on shore, after the heat, the result was still unknown, however once it was announced the Coolangatta cheer squad went into a Ferreira frenzy, hoisting their double champion high onto a surging human chariot. It was full-blown Carnevale on the beach, complete with waving flags, passionate chanting and obscene amounts of jiggling flesh. The fans chanted “Italo”, they chanted “Il Champion” and they chanted another song which one fan kindly translated as, “We are Brazil, we have so much love.” The Brazilian fan explained that Italo has grown to be more of a people’s champion than Gabriel, who many think is perhaps a little too preoccupied with his business pursuits and money-making ventures. In Italo they have a charismatic figure they can relate to – the heart on the sleeve interviews, the punk-blonde hair, the camo sprays and the pink suits at formal functions have given him a flamboyance and authenticity that his countrymen love. There is also something endearing about the site of his girlfriend, Maria, trotting down the beach with a back-up board. Medina has the brooding Charlie, Filipe has the excitable Riccardo but Italo has Maria backing him up – what a team.

When Tracks asked Italo earlier in the event what his aim is before a heat he didn’t talk about ‘sticking to his process’, or ‘taking it one wave at a time’, no he came straight out and said, “ I really like to go out and do a couple of big airs and put the other surfer in a combination situation.” What a guy. Sure he reigns it in when he needs to in order to make it through, but that’s the kind of surfer you want to watch – one who his trying to throw knock-out blows from the get go. With his colourful act and gung-ho approach, Italo seems to understand that pro-surfing is as much about entertainment as it is winning.

Italo does not simply want to win, he wants to win in an exceptional way, to do it like no-one before him has. As it stands he is right on track. He is the reigning champion for the next two events ( Bells and Keramas) which makes him a clear favourite to retain the yellow jersey as the tour bends back to Australia for the Margaret River contest. There is much to like about Italo Ferreira and although it’s early there is also much to suggest this is his year to emerge as a serious title contender.

What else was to be gleaned from the Quiksilver Pro? John John Florence was lucky to survive a scare against Conner Coffin in the quarters. Less than half a point separated them and it was only a slight preference for John John’s kinked rotations over Conner’s lay-back jam that got him home. John is definitely back on song, but if he has a weakness it’s the overall speed in his surfing, particularly in the smaller waves. You don't want him to force it but maybe he could add some zip.  Italo and Medina bring a little more acceleration and energy to their approach and sometimes this can secure them the nod in tight situations. Italo has certainly displayed more aerial variations than both of them at this event. Kolohe skipped past John in a quarter final that split hairs on small airs. On bigger faces at Bells, John John should be more effective. 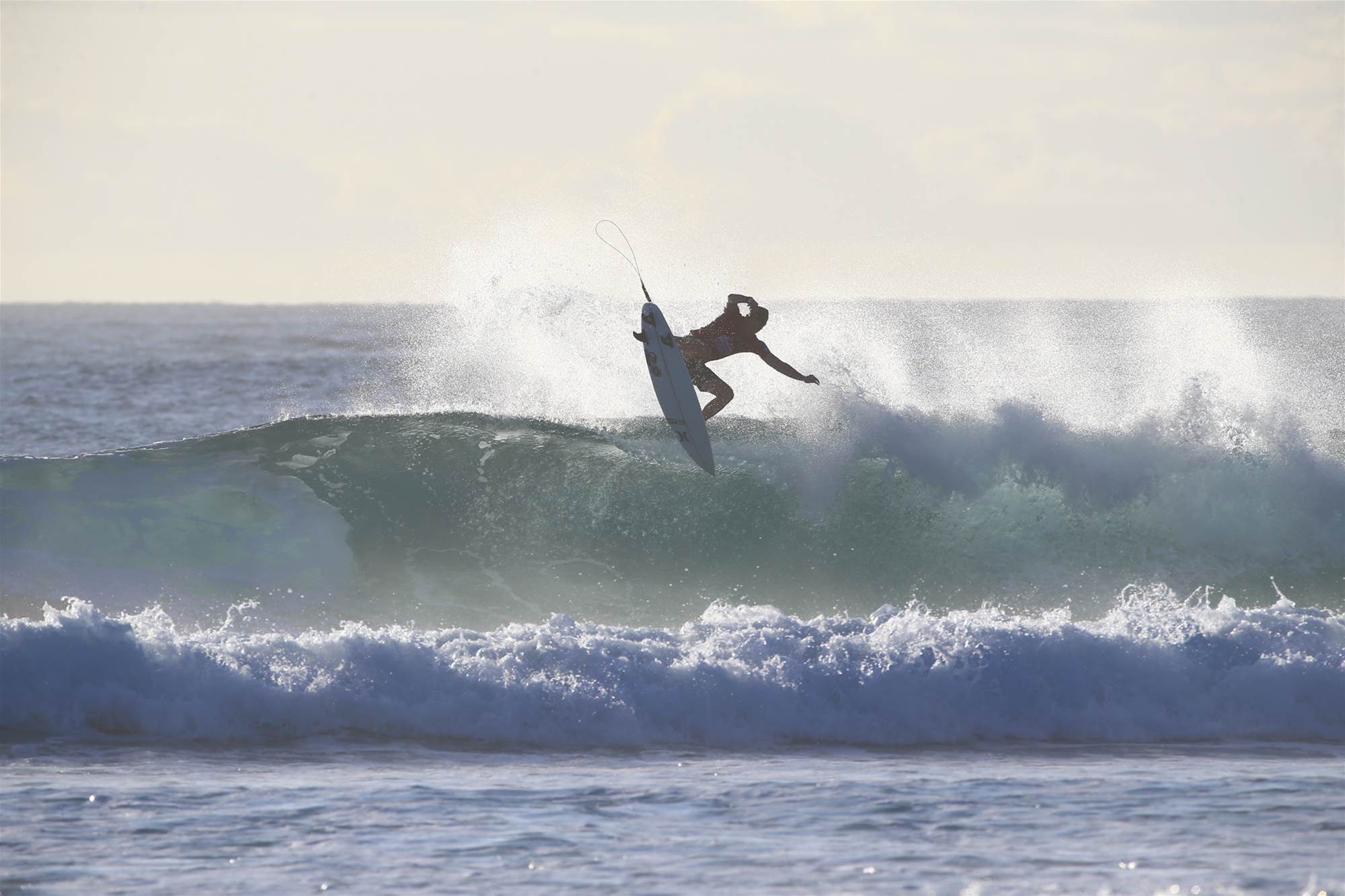 John John was tail-high but scoreboard low when it came to his semi-final with Kolohe Andino. Photo: Swilly

Despite wild demonstrations of brilliance in earlier rounds and a total decimation of the D’bah lineup yesterday (freesurfing), Medina looked pensive in his quarter final. It was like all that nervous tension Charlie wears on his face had been passed on to Gabriel as a stifling force rather than a performance enhancer. Medina always looks wound up but if he doesn’t find anything to uncoil on then things can go south fast. Gabriel barely caught a wave and he didn’t find a single good one. Instead he tried to force airs on wrong-way rights. He’s good but not so good that he can always win without decent waves. Meanwhile Jordy prowled the lineup like a big cat, finding the best D’bah chunks to demolish and rediscovering his own flight facilities as he alley-ooped to victory. Jordy has the formula right again – one nuclear rail turn and a big air gets the job done. None of the other contenders can match him for power and if his air game is in tune he can win. Against Italo in the semi he had the wave late in the heat; he made the turn, he just didn’t ride out of the air – he lands he gets the 6.67 he needs. The good news for Jordy fans is that he has learned to fly again (doing the biggest punt of the day for an 8.67) and looks to be in the kind of form that will also make him a contender. 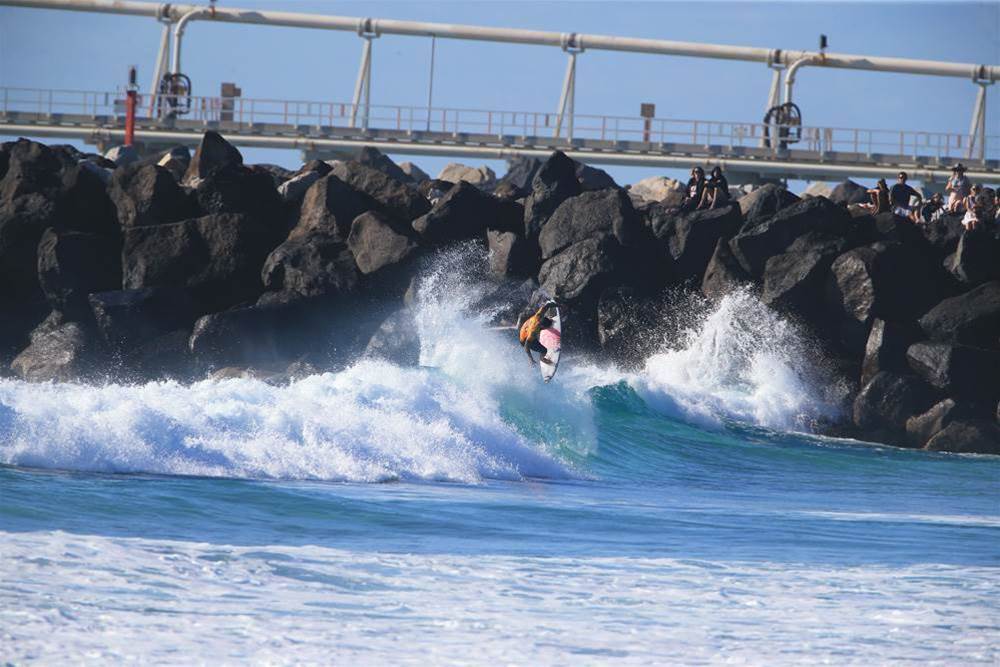 The magic was missing for Medina on finals day. Photo: Swilly

The Australian fans have less to cheer about with only Wade Carmichael progressing to the quarter-finals. Despite proving that he is no flightless big bird, Wade couldn’t overcome Italo’s trickery in the quarters, however, he has every reason to approach Bells with high expectations. Wade’s turns are not just heavy-weight hacks, but sublimely timed manoeuvres where he ditches the fins and still maintains his speed into the next section. He can obtain maximum points from an approach that sees him stick to the face. As it stands Oz fans are looking to Wade for salvation from an era that is looking decidedly green, blue and gold in a Brazilian kind of way. 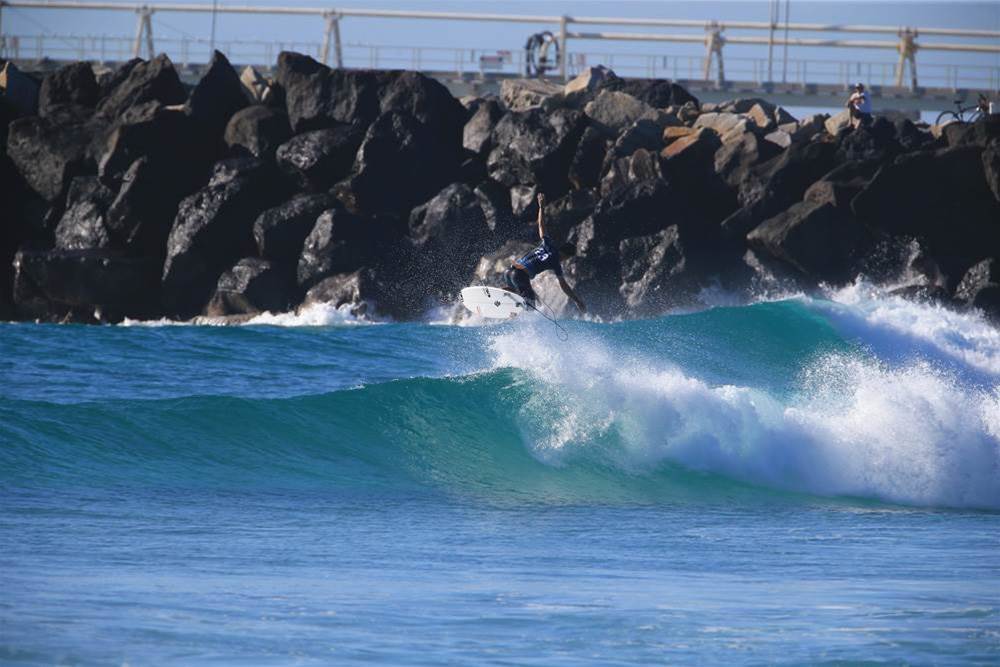 Jordy proved he hasn't forgotten how to fly. Photo: Swilly

In the Boost Mobile Pro Caroline Marks toppled world champions Steph Gilmore and Carissa Moore for a maiden victory that announces her as another serious player in the world title hunt. In addition to her bullet-proof confidence, Caroline’s primary weapon was a scything backside hook that blows the roof off the wave almost every time. There is something of Occy or Luke Egan in Caroline’s back-hand attack and I’m not sure the women’s tour has seen so lethal a backside approach before. Carissa Moore was more dynamic, throwing in the odd 360 disco spin and air attempt to spice things up, but Marks was just more vertical and more critical with her approach. Caroline will be winding up the backside hangers again at Bells, but will need to ensure that her act is well rounded if she wants to challenge for the title. Carissa is back in world-title-winning form, while Sally Fitzgibbons has reinvented her approach and looks looser than ever. Steph Gilmore obviously wants Layne’s record ( now equal at seven) but the other women are likely to make it her toughest battle yet.