And Rips the Yellow Jersey Right off Julian Wilson's Back

In a fast and exciting final, both surfers showed incredible performance and strength, surfing a number of heats from the quarterfinals all the way to the finals, but it was the Brazilian who had the edge on the Australian, taking the win with his aggressive approach to the long lines of Supertubes.

“Back-to-back wins is always something that I’ve dreamed of,” said Toledo. “It could not be more special than here in J-Bay after last year, and this year we’ve had such good waves again.” 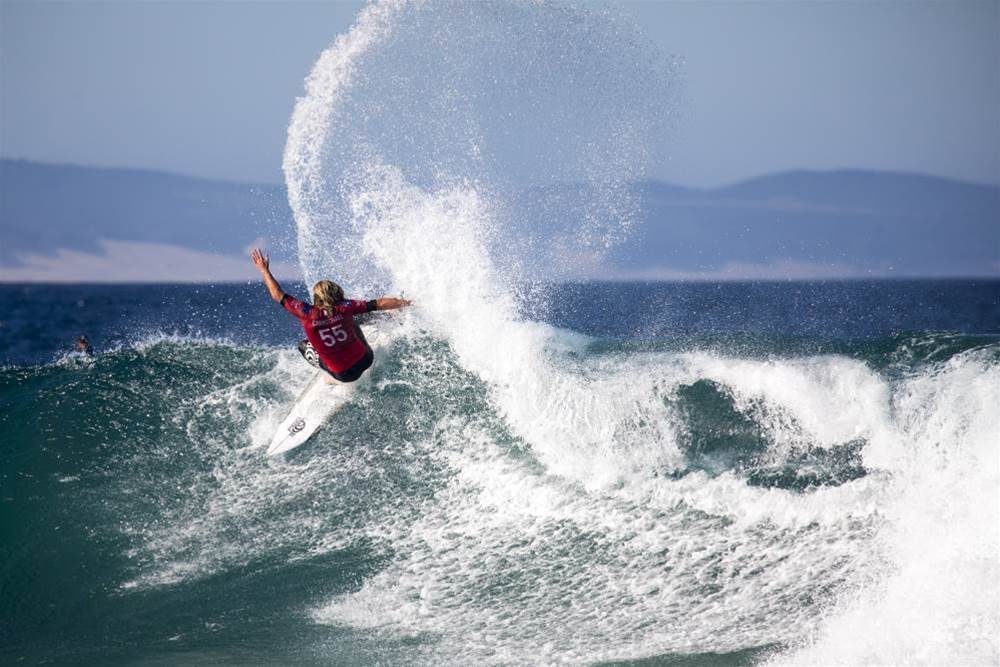 Wade Carmichael is on track to claim the rookie of the year award after claiming his second runner-up finish. WSL/Tostee

In the light onshore conditions, the end of an incredible four days of non-stop surf, the two surfers matched each other wave for wave and move for move, until Toledo snuck into a solid lead with a wave under priority that Carmichael showed no interest in whatsoever. Being primarily a power surfer, Carmichael knew that he needed a solid set wave to get the score, complete with classic carves an rail surfing, but that wave he was looking for never came. Despite a strong comeback performance from the Australian, including a last-ditch grab-rail air 360 attempt in the dying minutes, it was the lightning-fast young Brazilian who took the honours for the second year in a row.

South African CT surfer and two times event champion Jordy Smith was also on form throughout this event, but bowed out to Carmichael in an exciting semifinal clash. Power vs. power was how it went down, with two of the biggest guys on tour surfing hard and fast. A little bit of a slow start soon morphed into a huge tit-for-tat encounter as both surfers started blasting, with high speed power carves and massive lip-hits getting the crowds cheering and whistling. One of the bigger sets was a close battle, with Carmichael hooking a 6.67 and Jordy scoring 7.07, and that’s how close it was all the way to the end, with the two surfers getting washed into the gulley with the burly Australian just in front of the big South African.

In the second semifinal Toledo came up against the dynamic Kanoa Igarashi from Japan, and went to another level, posting two near perfect scores of 9.57 and 9.33 for the win and the finals berth.

Before that, the first quarterfinal was a tight affair, but the crowd had chosen their new hero, the ‘Roman Soldier’ that is Wade Carmichael, and he came in just ahead of Conner Coffin.

In the second quarterfinal, Jordy appeared on a new board. It looked a bit meatier, and he was ultra confident on it and in control, surfing with a totally cool demeanor. He knew what he needed to do against Jeep Leaderboard leader Julian Wilson, and he wasn’t prepared to do too much more than what was required. As their heat ticked down, Julian picked up an absolute bomb that had a wall stretching forever but he was out of sync with the wave, and his last ditch attempt at a huge air was unsuccessful, and he bowed out, leaving his Jeep Leaderboard top spot in jeopardy and his world title campaign under threat.

The Medina vs. Toledo quarters encounter was always going to be a cracker. On paper it looked like Toledo, but the x-factor of Medina’s persona combined with his huge backhand air skills made it a game of inches. Toledo drew first blood with a forehand reverse flip move, banking an 8.17 and the heat lead that he held on to. Towards the end of the heat a massive set came through, possibly the set of the day, with both surfers going crazy all the way to the gully. It wasn’t enough for Medina however, and Toledo continued to the semifinals.

Kanoa Igarashi had been a stand out all swell, with a few local surfers and spectators claiming him for a possible win, and in his encounter against Seabass he validated that assessment with a decisive win in the radically improved conditions at Supers. 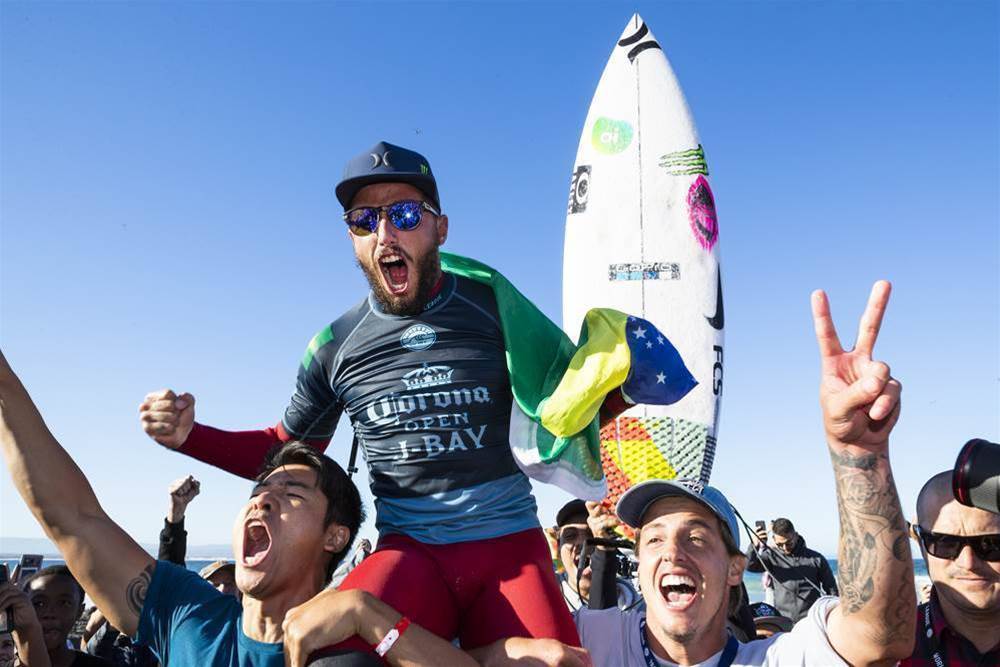 Jubilant scenes for as Toledo claims back to back Jbay victories. WSL/Cestari

With the victory, Filipe Toledo goes to number one on the Jeep Leaderboard, displacing Australian surfer Julian Wilson into second place. Gabriel Medina and Italo Ferreira make up third and fourth positions, while Smith sits fairly comfortably at fifth spot on the rankings, and is again a world title contender, along with the rest of the top five.

The Corona Open JBay now moves onto the Women’s Championship Tour event, and there is a good chance that the event might start tomorrow. For more on this contest go to the event website - http://www.worldsurfleague.com/events/2018/wct/2750/corona-open-j-bay-womens