When it comes to finless shenanigans few combine skill and imagination better than Ari Browne. Along with his brother, Raf, these Rainbow Region renaissance men were originators of the genre long before Derek Hynd arrived in their hometown on his Friction-Free trip.

The brothers began on an alaia as kids at Wategos, moved onto stand-up bodyboarding in their teenage years, and now finless foamies among a bunch of trippy fibreglass designs.

But it’s finless foamies, with their ability to “literally ride a ripple and,” says Ari, that he is tweaking heart lays. With none of the barriers of entry to conventional surfing (competence, etiquette, post code etc) they’re a refreshing contrast to the crowded, competitive, performance-obsessed lineups of the NSW north coast. And the perfect antidote to a hot, waveless summer.

SUPER 88 from 88 Surfboards on Vimeo.

Step One - Pick a board

More foam equals more fun, especially over summer with the northerlies and the conditions being so bad. It opens up more opportunities and potential that wasn’t there if you were riding a normal board.

What was garbage becomes good conditions. It’s almost like the shitter the better because you’re expectations are so low there’s no way I could have fun out there.

Depending on the conditions, if it’s a top to bottom reef break you want a little 5’6 or something smaller but if it’s shifting winds on a beach break 100% you want something seven footer or bigger. Point break you can get away with a smaller board or a huge board - it kinda depends on what you wanna go out and do. Essentially you can take the fins out of any foam board and have sick time.

I ride 88s (https://www.88surfboards.com) made by Harry Henderson. He does the most outlandish shit on them, he’s almost created his own genre. When the conditions are good he does the most batshit crazy things. He never really stands up in the conventional way, he does this thing called the prawn where he rides on his knees but sits asymmetrically on it. It’s almost like yoga.

You can ride everything, there’s no waves it’s not suitable for. I’ve seen Jamie O’Brien riding his ones at Pipeline when it’s macking and you can literally ride a ripple and still have fun.

You don’t want a shorey closing out instantly, you want to be able to get into it with enough time to do a bottom turn and a weird re-entry or floater or something.

Anyone who has ridden a soft top knows how tempting it is to break etiquette when you enter a serious lineup. You’re not taking things seriously and you’re board is not injuring anyone so it’s really hard to maintain etiquette on a soft top. But the etiquette is the same as any other surf - you should catch your own waves and wait your turn.

Because you can share waves with fellow soft-toppers if one person catches a wave everyone catches a wave. If a mate catches one out the back it’s as much as yours as it is his. You’re brethren, part of the same tribe, you can create your own ecosystem in the lineup, breaking your own rules and fucking each other up as long as you don’t fuck anyone up.

It also becomes a social thing too. Surfing is a solitary sport, a one man game. When you’re on a soft top with someone else and there’s no consequence of injury everyone can get involved and it’s the more the merrier. It makes everything funner.

Number one stay low whether you’re standing up or squatting down or whatever you wanna do (there’s no rules). My second biggest tip is to grab your outside rail on your bottom turn. A lot people tell me they’ve been trying to ride finless but can’t go down the line, can’t hold their board in the face of the wave and can only go laterally, can’t get it to lock-in. That’s to do with your weight distribution and feet positioning and wave positioning. I always tell people to put their back foot on their inside rail so most of their weight is on that inside edge of their board.

My biggest tip is not to approach it like regular surfing. Also, don’t try and treat it like a normal board. It’s soft and really buoyant, so you can kneel on it and catch waves, sit on it, if you’re having trouble you can literally lie on your belly and it’s the funnest thing you can do - the illusion of speed, you’re closer to the water so you feel like you’re going faster, it’s a lot harder to catch a rail on your tummy cos its easier to distribute your weight. Don’t stand up if you’re wiping out. You can lie, kneel or sit.

FRANKLE from 88 Surfboards on Vimeo.

One of the coolest things about finless surfing is it’s relatively new so there’s still undiscovered manoeuvres. You can really tap in and come up with something completely new and unique. That’s the most exciting thing to me: shutting my eyes and visualising a manoeuvre and going through the steps how you would do it and if you actually do it it’s one of the most satisfying things. Finless surfing has taught me about visualising in normal surfing to help improve skill.

Pop shuvit: Get a lot of street cred with that one. Your hi-fi guys will respect it ‘cos its got skate roots.

360: People will do their first 360 on a finless board and that is hugely satisfying for someone who has never done one. It’s a trick in all the board sports; skating, surfing, and snowboarding.

bad guy from 88 Surfboards on Vimeo.

Cutback: Then you start getting to the more nuanced things that require more practice, like a proper cutback. If done properly it is one of the most difficult things and one of the most satisfying. Like any sport you need to build up your muscle memory so you know what you need to do with your body to control the board and multiply that by all the variables that wave has. It’s very technical to do a proper cut back.

Deep, deep bottom turns: I learned to ride finless on an alaia. I remember coming up on a section that was breaking in front of me and I didn’t think I could get down with it. Instead of shooting a straight section I rode the wave on its highest point and right before it closed down on me I disengaged the rail and shifted my weight from toe to heel side on a right hander, put all my weight onto my heels and instead of going down the wave you slide way out onto the flats. If you can learn to get that timing right and then re-engage your inside rail and do a grab-rail bottom turn out of that you can do the craziest out-on the flats bottom turn to get around sections. That’s a sick one because a good bottom turn on any board feels good and it’s a really functional thing to do and it’s one of the best things you can learn in terms of riding long waves.

It’s lots of fun and got lots of possibilities in it. The future looks bright for soft topping! 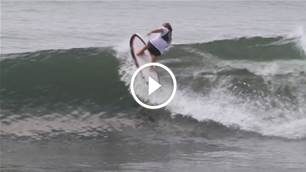 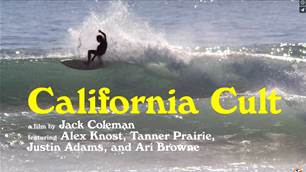 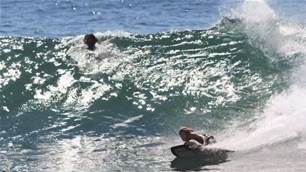