Occy’s smash and grab at the richest contest in the world.

When Newcastle’s Surfest event was spawned in 1985, the gritty city was underpinned by 70 years of steel industry labour. The smog-shrouded Newcastle steelworks had even appeared on the first cover of Tracks in 1970 as a kind of environmental alarm bell. Newcastle Steelworks on the cover of October Tracks,1970.

Introducing an international surfing event was seen as an attempt to re-cast Newcastle’s image by drawing attention to its vibrant beach scene as opposed to its billowing smokestacks. That didn’t mean organisers were beyond tapping BHP to sponsor the event. The industrial powerhouse was flush with cash, so throwing a few hundred grand the way of a bunch of brightly clad wax-heads wasn’t ever going to make a huge dent in the marketing budget. This was big industry sponsoring a nascent professional sport (10 years old) that was still battling to make ends meet. Needless to say the BHP bucks instantly made Surfest the ‘richest surfing contest in the world’. The tagline certainly helped put Newcastle on the map and ensured the world’s best surfers were more than happy to fly in from around the globe to hang at Newcastle.

The inaugural event, in 1985, saw Tom Curren defeat 1977 World Champion, Shaun Tomson, and claim the hefty $30 000 in prize money. Curren, went on to win his first World Title that year. In 1986, BHP was still the sponsor and contest shots show a giant sign stretched across the skyline reading, ‘BHP steel making Australia stronger’. Down on the beach below a throng of fans turned out to watch the final between the new World Champion, Tom Curren, and his archrival Mark Occhilupo.

Occy and Curren paddled out in glassy conditions, but in an era long before accurate surf reports were a click away, Occy had the edge after speaking to a mate in Sydney. “He told me that they’d just had a huge southerly buster in Sydney, so I knew that the southerly was going to come at some point,” reflects Occy, who instantly adjusted his tactics on account of the tip-off. “I got a quick start with two scores in the first five minutes and sure enough it came out of nowhere and blew so hard you couldn’t even get a score.” In the timeless shot by Tony Nolan (above) Occy’s wind-whipped shock of blonde hair points to the part by the southerly in the plot. According to Occy the payment methods, even in the ‘richest surf contest in the world’ were fairly basic back then. “They were the days when they use to give us cash. It didn’t go into your bank account back then… we got a bag of money, we use to get them everywhere, they were so fun. It was always US dollars, it was epic.”

Curren went on to claim his second World Title in 1986/87, but Occy’s ’86 victory at Newcastle is still remembered as an iconic moment in city beach, pro-surfing. Twelve tumultuous years later, in 1998, Occy had recaptured the ‘Raging Bull’ fervour and won at Newcastle for a second time. The following year the Newcastle steelworks shut down, inspiring Novacastrians to reinvent their city as a cosmopolitan, coastal-hub. Meanwhile, Occy reached the zenith of his second-coming by winning the 1999 World Title. 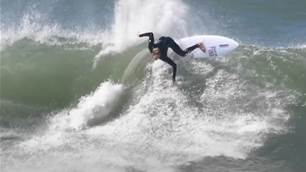