Imagine if this went down in Australia.

How’s this for some bizarre news out of Bali.

It’s being reported that foreign surfers who chose to stay on in Bali amid the coronavirus pandemic have been given the nod by authorities to surf a couple of the island’s most popular breaks - but the locals are still banned from joining them.

Word is Canggu and Padang Padang opened on Monday to foreign surfers only, after authorities were scared if they continued to access the breaks through the bush they would be bitten by snakes.

‘We just feel pity for them, staying in Bali but they can’t go to a beach,’ he said. ‘They feel dizzy, a little bit stressed. We want to make sure that all foreigners that still stay in Bali are happy being in Bali.’

The treatment seems odd considering the westerners are seemingly being rewarded for doing the wrong thing, but such is the power of tourism on the island.

‘If the access is not opened I am worried that they will continuously access the beach through the bush and they would be bitten by snakes,’ Badra said. ‘It is way more dangerous.’

Not that it’s just open slather for the foreigners, with certain health protocols in place, including temperature checks on the beach.

Still, you can’t imagine the decision would be popular among the local surfing community.

Bali’s beaches and tourist areas have been closed since late March. However, some beach access points in Kuta have reopened, as have Pecatu Beach, Nyangnyang Beach, and a number of beaches in Sanur. 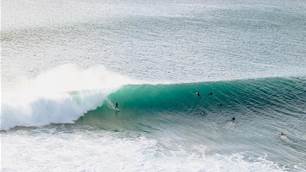