How an underage grom from the most maligned beach in the country walked away with a world title.

When 15 year old, Grayson Hinrichs, picks up the phone he’s still trying to drag himself out of bed for school. Days back from claiming the Under 16 ISA World Junior Championship in Huntington Beach California, where he beat a field of competitors, most of whom were a year older than him, it  he must all seem like a dream as he he packs his lunch box and trudges off to school.

Tracks: You’re the world champ but it didn’t come easy. Talk us through the intense final stages.

Grayson: We all stayed together in this big hotel right across the road from Huntington Pier where the comp was.

And then I made that, I had a really good start and I had my confidence together. We were paddling out for the finals and the heat before was the U’16 Girls finals. When the chick won she just threw her arms in the air and was screaming, about to cry. I got all these hairs standing up all over me. I was like, imagine that, that would be the best thing ever.

Then in the final I had a really good start, I got a 7.5. I let (second place, American) Kade (Matson) get the first one, by accident actually, and it turns out there’s another one behind and I took off and it was kind of a closeout and I did one spin at the start and came from behind the section and did the biggest turn I could on my backside - two big turns out the back - and then I pumped it through nothing but there was nothing on the inside.

Then I got a 6.8 all in the first four minutes. Then I sat with priority for ages. Everyone started dropping scores as well and Kade ended up going into the lead. He did a backside Air Rev and got an 8 and then got another one, did two backside snaps and got a 7.5.

So I needed an 8.1 to go into the lead. I sat there with priority, a bomb came down the beach and I paddled down there and didn’t end up getting it so I paddled back up the beach to the pier where the second was breaking and Kade was about to take off. I just managed to get there in time and took off on it and got an 8.6 for two big turns out the back and then I got a really good inside connection and did a carve two more turns on the inside.

So I started sitting on everyone because everyone could have gotten the score. Everyone had 7s or 8s. The kid from Japan took off and did a snap and then a big air but he didn’t make the air. It would have been a 9 if he did and he would have won. It was intense. 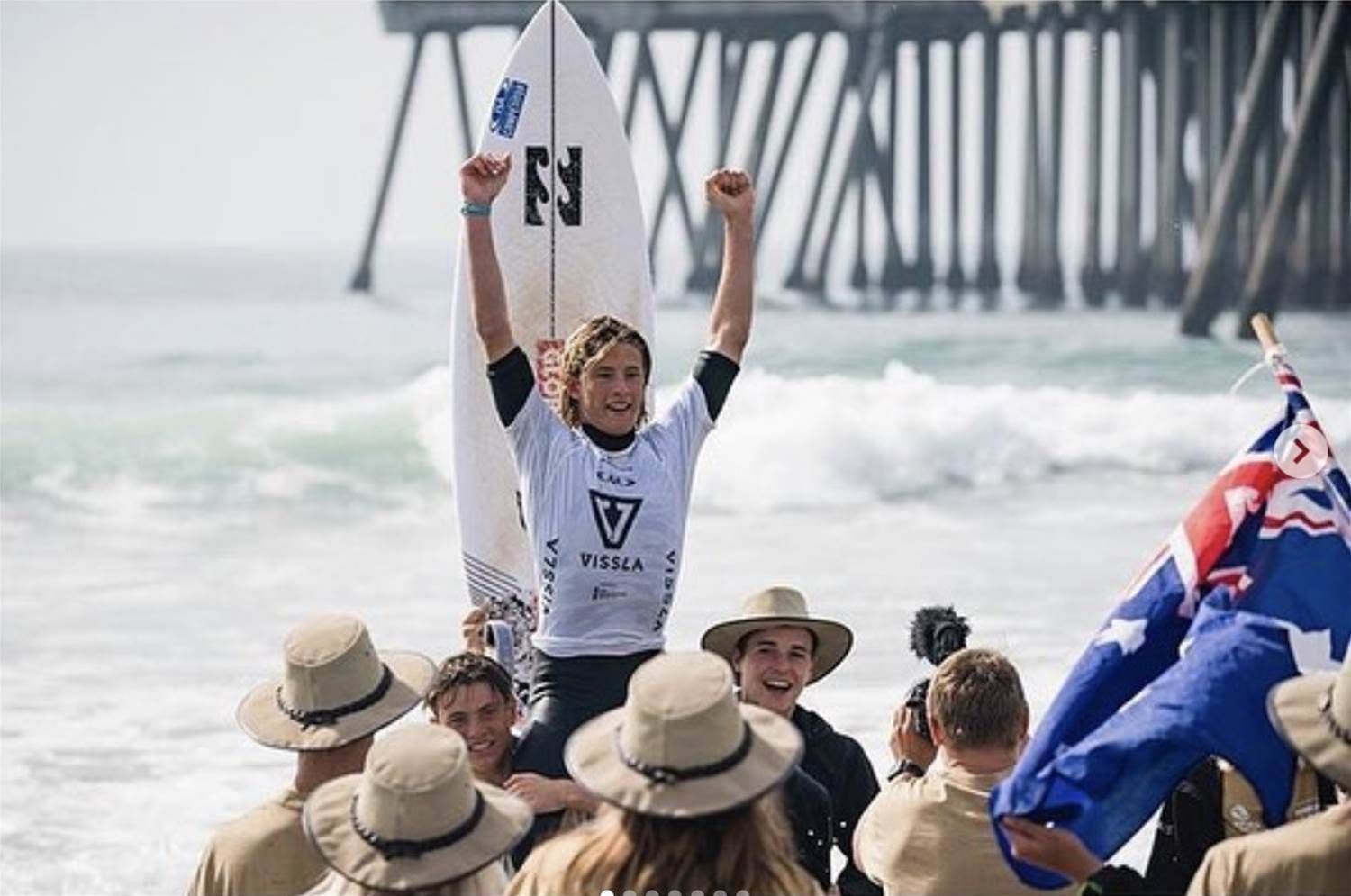 I hear the waves were actually pretty fun.

There was waves the whole event. Some days it was up to four to five foot on the best days and then after that two foot and still really fun. It was always clean in the morning and really fun and by 11 or 12 it would go onshore. It was just a right and left bank.

How did the waves compare to Bondi?

Really similar. It was a bit weak and it really had the same rip bowl kind of wave on the right tide so I was pretty used to it. It wasn’t amazing but pretty fun.

How did you prepare?

I did a bit of coaching at HPC (Hurley High Performance Centre) but I missed all my actual coaching sessions to go there (to Huntington) so I was just skating and surfing. A bit of diving too.

You’re the NSW State Spearfishing Champion as well. Does that help your surfing?

It’s definitely helped me be confident in bigger waves. Being able to calm yourself down and hold your breath is the biggest thing in surfing. It doesn’t just help you survive when it’s big, it helps you calm down when you’re under pressure in heats and stuff.

As we both know, Bondi gets written off a lot. For the uninitiated, what’s it like growing up there?

All the commentators in pretty much all the comps I do are writing off Bondi saying how bad it is and when I start pumping to the inside it’s the ‘Bondi bounce’ or something like that. I don’t care. It isn’t the best wave but I live here, so you gotta do what you gotta do. I still love the place. It just gets frustrating in summer.

You might be the ISA world champ but you haven’t knocked local legend Perth Standlick from his Perch at Boardriders yet.

I know! I was talking to him about that the other day. That’s my goal next year to beat him in a heat. It’s gonna go down next board riders.

There’s some good surfers from down Bondi now - Perth, Pama Davies, the HPC coach, Clancy Dawson is also from Bondi.

Perth, (Sunny Coast expat, Chris) Friendy, Pama, they’re all really nice and push your surfing heaps, especially Perth. He takes me places and helps me experience new waves around home and really pushes me. Fun little rivalry in heats too.

How keen are you to forge a reputation in bigger surf?

For sure. I’m going to Hawaii for three weeks on the 25th (of November) to get some training there and trying to get more confident in bigger surf. I’m going for two weeks with Clancy and Surfing Australia and some older QS guys. I’ll be trying to learn the waves at Hawaii. Then the Billabong house for the last week.

Are bigger waves and bigger turns a weakness?

I’ve never been properly barrelled in a comp before so I’m not really too sure how that would pan out. I do get the chance to do bigger turns just not as much as other kids too. It’s not a weakness but it’s not a strength.

What’s it been like returning to school after winning the Worlds?

What’s next in the future?

Try and do all the pro juniors next year and qualify for the pro junior worlds and I was going to try and travel a bit and experience some new surf spots. - Jed Smith