Restaurants provides a welcomed warm up for the early arrivals of the Fiji Pro.

If you’d been fortunate enough to be in the line up of Restaurants this morning you would have witnessed some very fine surfing. The early arrivals of the Fiji Pro enjoyed a warm up session that featured Kelly Slater, Mick Fanning, Joel Parkinson, Josh Kerr, Ace Buchan, Wiggolly Dantas, Matt Banting and plenty more.

At one point Kelly Slater appeared from thin air, picking off one of the waves of the day, leaving everyone slack jawed, negotiating the boils and steps blindfolded as the wave warbled down the line spit shooting past his ears. Adriano de Souza probably summed it up best:

“I thought I was deep! I was just sitting here thinking I’m in a good spot and then you see Kelly inside the barrel,” he said shaking his head in disbelief.

But it was Josh Kerr’s wipeout that abruptly changed the tone of the whole session. Kerrzy had just paddled out and picked off a couple of waves before he scooped under a chunk of the Pacific. He stuck the take off but was bucked off his board dealing with the staircase and pushed straight down headfirst into his board with the weight of a two-story building. He surfaced, dazed, bleeding and clutching his forehead before he was taxied back to Tavi. He ended up with seven stitches and one bloody big headache.

Meanwhile Glenn Hall was surfing fearlessly and considering the last time he was here he broke his back looked very comfortable weaving through thundering drainpipes. He told Tracks it felt good to be back at Restaurants two years on from his injury.

“It was good to take it on and get back to where I was last towed in on a jet ski. It was nice that all the boys were out there too and everyone was having a laugh that it was my first surf back and called me into a few. It was a good experience.” 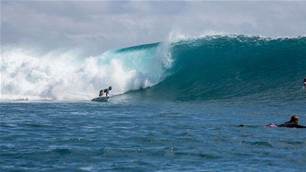 Gallery: A Freesurf Session at Restaurants