Mark Healey, Gabriel Villaran and handful of chargers tackle the swell of the decade.

On May 3rd the swell of the decade lit up Puerto Escondido. The famed beach break in Mainland Mex is no stranger to huge surf. It’s what draws the best big wave surfers and underground chargers to the fabled port town every season. However, yesterday was really something.

“This is the biggest swell I’ve seen in Puerto Escondido. It was unbelievable!” recounts local surfer and photographer, Astrid Fonseca.

Part-time Hollywood stuntman and big wave charger Mark Healey caught arguably the biggest wave ever recorded at Puerto before being vapourised as he was swallowed whole.

“It was mind blowing to watch Healey paddle into that huge moving mountain of water," said Astrid.

"Many people were gathered at the beach and it was cool to see them enjoying time with friends and screaming every time a surfer paddled for a wave. Everybody felt relieved when he made it back to the beach safe!”

Head Lifeguard at Playa Zicatela, Godofredo Vazquez, even went so far as to say this swell is up there with the ones from 1994 and 2006, two of the biggest he can recall ever hitting Puerto.

Aside from the death or glory moments out to sea there was plenty of activity behind the scenes as well.

“The swell flooded the street at Zicatela and many businesses were forced to close. However it was actually nice to see everybody helping out each other. This swell really showed a sense of community in all senses, from the local people who helped each other when the waves were washing the streets, to those who came down to the beach to cheer on the surfers and the lifeguards and surfers taking care of each other in the water.”

Here are some of the images that stood out from a swell that will be talked about for many years to come. 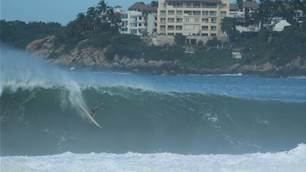 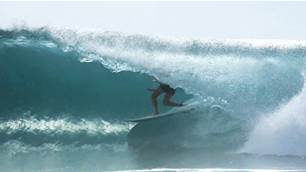