What happens when the surf trip becomes a psychedelic ‘trip’.

It had been some years since I was last in South Sumatra, and I didn’t have many fond memories of the journey required to get there. A flight to Jakarta, then a flight to Bandar Lampung, followed by a very long drive in a car. The fact that my boards didn’t show up also soured things a bit. Getting them delivered six hours up the coast was pretty difficult to organize. It reminded me that anything is possible in Indonesia, as long as you have the Rupiah to make it happen. When my gear did finally arrive, I snapped two of my favorite boards almost immediately. This defined my lasting impressions of the trip. The waves in the region were unforgiving, and the barrels weren’t always makeable.

The travel went a bit easier this time around. Even during Covid, Jakarta airport remains a confusing place. Departure times and airport gates seem to be regularly changed on a whim, and any last-minute adjustments are announced over the loudspeaker in garbled and confusing Bahasa. Luckily, our boards and luggage were all delivered when we touched down in Bandar Lampung. The airport had been through some major renovations. The shiny façade on the new building stood in stark contrast to the tin shed setup during my last visit. The flock of goats grazing next to the runway had also been moved on. I gave a wistful glance across the empty fields as we walked across the tarmac towards the arrivals hall. A new enthusiasm for safety guidelines probably meant livestock were being removed from airport meadows across rural Indonesia. It seemed a pity, but such is the price of progress.

We began the drive north towards Krui in the late afternoon. Our driver chain-smoked cigarettes while speeding and overtaking on blind corners. He chatted casually on his phone while swerving past livestock and around whole families riding on scooters. As the fields and rice paddies flew by, my mind drifted back to my previous trip to South Sumatra. I had based myself at the same surf camp for almost a month. Over that time, I came to know some of the other guests quite well. Lou and Anne had been from California and were on their annual surf trip to Indonesia. They were a bit older and usually skipped the late-night drinking sessions, preferring instead to check the waves early and watch the sunrise. I usually managed to join them. As we sat there drinking coffee, they would talk about their life back in the States, and how they eventually hoped to retire in Indonesia.

I had also been surfing with a boisterous group of lads from Western Australia. They charged almost as hard as they drank. I paddled out with them on some of the bigger days and looked on in amusement, then in concern, as they hurled themselves into the most intimidating sets. We were in the process of packing up the car after another solid session in the water. I looked out into a nearby field and noticed one of the boys chatting intently to a local man. He eventually returned to the car wearing an enthusiastic grin. Holding up a dirty plastic bag he exclaimed triumphantly "I just bought a bag full of magic mushrooms".

The drive back to camp took over an hour. The Western Australian crew didn't hold back. In fact, they didn't even bother to wash the mushrooms first, they just started eating them raw. It was interesting watching the effects take hold. The conversation in the car had been fairly bland leading up. Where people surfed at home; where they had done trips; what they did for work etc. But as the journey neared its end the dialogue became strangely insightful. Apparently, the fields and the forest were a special kind of green, and driving in the car felt like a bit like travelling in a spaceship.

The swell was forecast to hang in there for another day or two, and occupants of the camp split into two distinct factions. Those that wanted to surf, and those that wanted to explore the nature of consciousness. The Western Australian lads attacked the mushroom bag much like they attacked the waves. They ate way beyond what would have been sensible or prudent. By late afternoon they were rolling around in the grass, laughing hysterically, and having animated conversations with fresh air.

Later we sat at dinner. The mushroom experience had continued on the beach as darkness fell. You could occasionally hear shouts and laughter echoing as the waves crashed. Lou and Anne from California appeared slightly bemused by the afternoon’s events but were trying to see the funny side. Just as we were finishing up, the yelling on the beach escalated. We made our way over to the lookout platform. The sand was bathed in moonlight and visibility was better than you might expect. One of the guys had gathered some vines from somewhere. He was running along the beach stark naked holding them above his head. It made for an interesting spectacle. His tackle was flopping around, and the vines fluttered along behind, like streamers wet from heavy rain. He continued down the beach at pace and seemed almost to gain momentum. As he disappeared into darkness his yells slowly trailed off leaving only a strange eerie silence.

Those still focused on surf were up early. The swell was dropping but there were a few nice clean ones rolling through the break out front. I sat on a peak with Lou and Anne and we traded waves for an hour or two. Lou mentioned that one of his friends had a bad trip while on magic mushrooms. He had gone a bit crazy and ended up in prison.

Early afternoon arrived and the ocean had become calm. Questions were asked about the mushroom bag, and word returned that there were plenty left. The Western Australian lads appeared, looking shaken but they seemed ready for round two. Papaya's and Mangoes were requested, and mushroom shakes were prepared. Just about everyone in the camp gathered to drink.

An hour or so later the tunes were pumping. The late afternoon sun was blazing down while some of the group laid out on the grass. The nearby jungle appeared lush with a deep living green, and the ocean flowed with a vibrant energy, as little peaks rolled through and unloaded onto the sand. A small number were frolicking in the shore break. One of the guys found a barrel, and those on the beach erupted with cheers.

Dinner was served as evening arrived, but no one appeared to be very hungry. Most were gathered around the pool table stroking the felt and watching the balls roll slowly into the pockets. Only Lou and Anne sat down to eat, they watched on uneasily as the pool table caressing continued. The conversation became earnest. Someone decided in that moment that they would open their own camp nearby. It would exist solely for sampling the local gold top mushrooms. Others were quickly swept up in the plan. A set of potential investors was immediately onboard and more mushroom shakes were ordered to celebrate. Lou and Anne finished their dinner and hurriedly returned to their room.

The evening continued. A large donation bag of clothes was discovered behind the kitchen, and was broken out. Some were soon decked out in bright floral shirts and football tops. One of the lads looked splendid in a long flowing gown. Other dresses and skirts were found and were quickly snapped up. The party started in earnest, and the dining area became a makeshift dance floor. It only slowed down for a brief period, when one fellow decided to phone his parents. Everyone went quiet as he told them he loved them and wished his father a teary happy birthday. Confusion quickly followed. It turned out his Dad’s birthday wasn't until later that week.

It was getting late. Team Western Australia had freaked out and were hiding in their beds. A second night in a row had put them over the edge. There were people still about, but the vibe had become uneasy. There had been an ongoing tussle for control of the stereo for the entire evening. The most determined were now staking out the usb cable and attempting to control the flow of tunes. The lure of the pool table continued to be all-powerful. Someone was splayed out full length and completely immersing themselves in the fuzzy felt experience.

As debate surrounding the most recent music selection raged, a loud shout came from the grass outside. The moon had risen above the jungles of South Sumatra. As it hung in the sky like a large silver talisman, pale moonbeams shone down into the garden, where one of the lads was standing transfixed. He gazed upwards with his arms raised in reverence, hooting at the spectacle. Losing ourselves in the soft luminescence of late evening, we all slowly wandered out to join him.

The group stood together under a broad sparkling sky as the universe wheeled above. In that moment, we knew we were treading a path worn deep over the course of millennia. We were but a few of a great many, for our ancestors had been here before us. They had also tasted the fruit of the gods, in their turn seeking out the sacred knowledge. And like us, they had stood in solemn contemplation, while gazing upwards at the shining grey face above.

The quiet seemed to gather around, broken only by the wind in the trees. Then, like an ancient call from days long past, someone let loose a solitary haunting howl. It echoed through the night like the tolling of a great bell. Slowly, one by one, others took up the cry. The tribe stood together and raised its collective voice. Only then did I notice a nearby door become slightly ajar. Lou and Anne from California appeared to stare out, and their eyes soon widened in fright. I guess the sight that greeted them may have been somewhat troubling. A ragged group of cross-dressed tripping surfers, screaming wide-eyed at the moon. 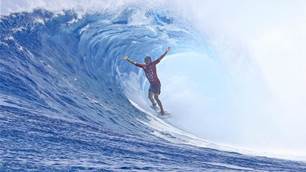