The dust may have settled in Lemoore after Kelly’s pool party but opinions are in overdrive. Will wave pools be good for surfing? Is it the End of Days as the custodian of surf history, Matt Warshaw offered? Will any grubby surf journalists ever get an invite?

Miles away from Lemoore one person who has the potential to eclipse Kelly's Surf Ranch was closely watching the day unfold. Australian shaper Greg Webber, has maintained his wave pool will be far superior to Slaters. So, who better to ask what he thought of Kelly’s wave, the WSL event and when we can expect to see his long-awaited design in action.

Tracks: You’ve studied the footage, what did you make of Kelly’s updated wave and event?

Greg Webber: It was pretty amazing really. The wave changes along the way which is great to see and it's a very good indication of where competitive surfing can now go.

Are you still confident your wave will outclass the one at Lemoore?

Yes, I am but Kelly is still laying the foundation for surfing to enter parts of the world that would have never got to experience it. Who in the surfing world could give wave pools any greater credibility. If the method we use does end up being the best, then I'll still have to acknowledge the work that Kelly has done which indirectly has helped me.

Did you see any flaws in the design?

I can see some small flaws in Kelly's wave that are subtle enough to not want to mention out of not wanting to be picky. But the bottom of the wave has a lack of power so some turns have to be adjusted a bit to handle that.

After watching half a dozen waves I felt I had seen everything. Did you have a similar experience?

Yes, it might get a bit repetitious since the new changes are solely from gradient changes and so although it's an improvement to now have sections, they are the exact same sections each time. When it comes to controlling the wave shape then unbroken swell is one thing and the gradient is the other. If you can totally alter the wall, as it goes along, then you don't need to alter the gradient. Then the changes can be almost infinite.

Only Filipe went above the lip. What did you make of that?

Well that might be since it's quite hard to make sections pop up as they do in nature. When surfers have ramps in front of them to project off, those ramps are due to the wave sections not the gradient so if you can't create ramps then a limited range of airs can be done. But of course, Kelly and his team might create gradient changes to make a closeout for an air at the end of the wave but then again it will be exactly same section so it'll lack the spontaneous aspect.

What do you think Kelly and the WSL have successfully done with this event? The leaked footage and Instagram feed sure captivated surfers around the globe?

They have proven that such an event can work better in some ways than any event in nature. It's an incredibly perfect wave that's exactly the same each time which makes competing totally fair for the first time, and it can be televised at whatever time and in whatever way is desired. The yet to be answered part is the how stoked will the average surfer be on a day to day level. How much will those surfers pay and how often will they go pool surfing.

The million dollar question remains, when will your wave pool be ready?

Likely to be less than six months, but it's our first build so who knows. That's just the first testing phase to show whether it's better or not. As for when it will be open to the public I can't say just yet. 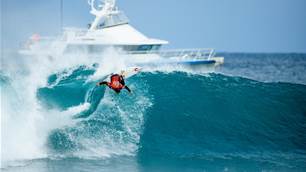