One turn that will never go out of style is the gouging top turn, fittingly known as the hack.

One turn that will never go out of style is the gouging top turn, fittingly known as the hack. It’s the perfect hybrid of a re-entry and a cuttie and is performed in the pocket with speed and force. The hack is bastardized version of the snap, itself a descendent of the top turn. The name has become increasingly aggro in keeping with the way the move is now performed. A snap is no longer descriptive enough. Jazz musicians snap their fingers to the back beat. Boy scouts snap twigs to start a fire. Murderers hack peoples heads off.

Word nerds will be thrilled to know that hack is onomatopoeic. That means its a word which sounds like the action or object it describes. Clearly we need this swell draught to end because I am now getting my kicks out of onomatopoeic words. Plonk is a good one. Ping pong another. Anyway, I digress...

Recently, I spoke to Matt Hoy who still has one of the best hacks in the business. I was hoping to get some insights about how to become a mad hacker but Matt was kind of stumped for words, as most people are when they try to describe what is it that they actually do on a surfboard. “You just kinda go fast, put it on rail and go haaaaccckk!”, he told me. Sage, onomatopoeic advice. 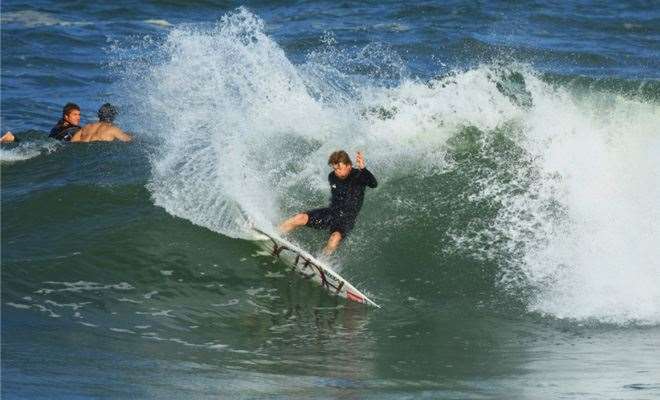 You’re famous for the hack. Was it a move you focused on as a young fella?

I just tried to surf how I surf. I like to go fast and put some weight behind it you know. I didn’t really practice it or think about wanting to be renowned for it, I just did it. It’s just the way I surf. I couldn’t do much about it.

Who did you look up to as a grommet?

Yeah, all the hackers. Richard Cram, Elko, Simon Anderson, Michael Peterson, Terry Richardson, Newcastle’s Col Smith.. all the guys from that era that could do cutbacks and throw some spray.

Were they called hacks back in the day or is that a new thing?

I don’t think they really were. They were just called cutbacks in the old days. It’s kinda come of age, the hack. It’s a good word for it – HACK. I like it.

A hack’s different to a cutback isn’t it? It’s a different turn altogether...

Yeah, it’s a HACK! I don’t know where the word hack came from.

Is there a particular wave that is suited to the hack?

Off the rocks at Merewether is really suited to them. You get those nice little bowls forming. Just anywhere with a bit of push. You can do a hack anywhere if you are going fast.

So what is the Matt Hoy tip for mastering a proper man-sized hack?

You need to going fast. Speed is your friend. And then you put in up on rail and really just throw all your weight behind it. Its hard to describe because it’s pretty simple really. Heaps of people do them all different ways. You usually end up going into a layback. If you do them hard enough you’ve got to layback. That means you are putting the right amount of effort into them.

Dane Reynolds and Parko. They’re the best two I reckon. Mick does a couple of good ones too actually. I saw a photo of him just the other day of him doing a layback, full HACK. But everyone can do them it’s not even a hard manoeuvre these days. Not compared to what some of these young guys are doing.

Some groms don’t really do them all that well.

Yeah, true. Some groms are doing airs before the learn how to turn. I’d rather see them learn how to surf before they start doing airs. Get the basics down first. That’s what most of the guys who are blowing up now – that’s where they came from.

Hoyo is also a TV star.