His new fin designs and correspondence with Kelly

Cheyne Horan was back in Bondi last week – surfing, starring in a locally made TV pilot, catching up with old friends, talking up his new fin system and causing trouble with dramatic instagram attacks on the WSL judges. (Interesting viewing on Cheyne's instagram)

At 56 Horan remains determined to influence the world of surfing in more ways than one. In person he is a vibrant mixture of Hollywood charisma, restless creativity and sharply-honed competitive instincts. Beneath the famed shock of blonde hair, the blue eyes have a hypnotic almost, mischievous gleam and he still sports the elite surfer’s drive to ride every wave better than the last. Vintage Horan coming off the bottom.

Drying off from a morning surf at his old stomping ground, he’s already analysing the session, wondering which board might have gone better in the sluggish conditions, planning his next surf, making jokes, evaluating the impact of the tide, bantering with a friend, all in one seamless stream of consciousness flow – if he can’t be in the contest any longer he appears steadfastly determined to be the one who has extracted the most fun out of the surfing experience.

Cheyne has never been the kind to take the conservative approach when it comes to the people or ideas that influence him. His regular partner in crime these days, is Tony Spanos, a diminutive Greek Australian who comes from a family of meat barons. Tony has amongst other things been a NASCAR driver a polo player, and an Aboriginal activist; he also has ambitions of buying a Greek island and turning it into an embassy for Indigenous Australians. Together Cheyne and the frenetic, dark-skinned, Tony make quite a team. The polar opposite of a stiff, corporate alliance, they are more of a rolling theatre act where the fun never stops. The wing-keel design that defined much of Cheyne's competitive career.

Cheyne’s esoteric ideas, personal journeys, board experiments and eccentric acquaintances have always prompted some to dismiss his theories and opinions. However, over a coffee he points out that he and Kelly have a well-established correspondence. He shows me the to and fro’ of a recent text message exchange with Kelly, in which they discuss everything from boards to heat tactics. Sipping a mug of ‘cino he relishes the chance to break down Slater’s loss to Filipe. Cheyne even explains his secret strategy for neutralizing the momentum of competitor’s like Toledo. “If he’d used it he would have won,” he states emphatically. Despite the hardships it’s delivered him, Horan obviously retains an effervescent passion for pro surfing.

At the 35 min 20 mark Kelly discusses his correspondence with Cheyne.

When talk turns to his new fins he’s again reluctant to spill the beans on the exact logic behind the design. Instead he points to the similarities between the template’s shape and the wing of a bird or a fast plane – suggesting that there a major parallels between the way an object moves through the air and water. Ben Lexcen’s theories are thrown into the mix and once again Cheyne has you thinking on new tangents, wondering if there isn’t something in this new design. 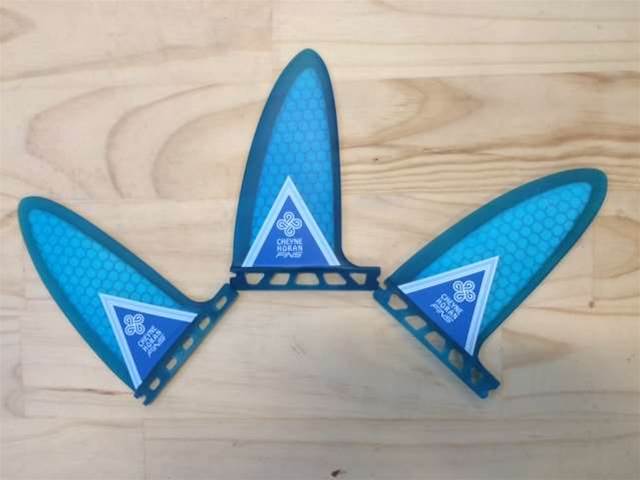 At the coffee shop, Cheyne is pin-balling between me, Tony and his old mate, Col Sutherland, while taking orders for the fins. “The fins are going off,” he exclaims excitedly as he finishes a call. There’s obviously a commercial agenda at work with the fins but as much as anything he seems to crave creative validation for the concept. Cheyne also points out that he’s working on a story, which details his own personal history with fin design.

“I’m giving one of my boards away,” he informs me. All you have to do is go on to my site   and buy a pair of fins and you go into the draw to win the board I’m riding in the clip.” Cheyne boasts that it will be a legitimate, old school live-draw that features him pulling the winner out of a barrel.

Our meeting was random and not planned and as I explain I have to leave, a girl shows up for a surf lesson. Somewhere between texting Kelly, selling fins, surfing, talking to me, performing running comedy with Tony and appearing on TV, Cheyne had organised a lesson with a learner. He greets her with all the sincerity and charm of a gentleman – there might be a little honest hustle, but there’s no pro-surfer posturing to speak of.

Later that day Cheyne calls me. “I had the best second surf at Bondi,” he exclaims, unafraid to make a comment which challenges the status quo of surfing at a beach rated the worst in Aus’ by some. “I wasn’t that diplomatic with my instagram post to the judges though,” he chuckles. As he discusses the fins, his instagram attack on the WSL and his session, it’s like I’m talking to a showman, surfer, inventor and salesman all at once. It’s hard not to marvel at Horan’s ability to wear that many hats so enthusiastically. So often he’s remembered for the world titles he didn’t win but if the real measure of success is what you can bring to the moment then it seems Cheyne is still streets in front. And whether it be through his masterminded coaching strategies for Kelly, his good humoured agitation of the WSL, his alternative fin designs, or his unadulterated commitment to fun, it’s likely Cheyne will continue to be a colourful an influential presence in surfing.