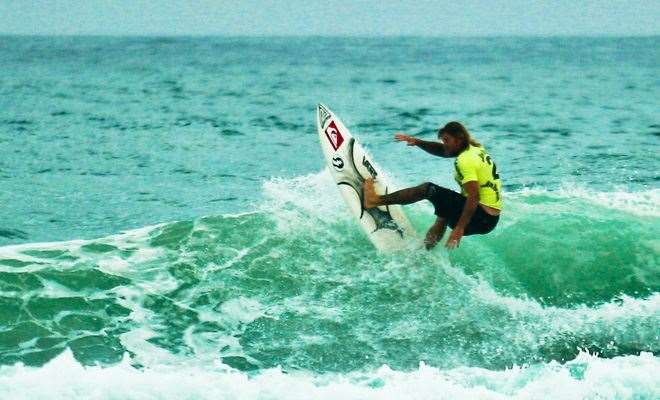 One of The Steel Cities favourite son's, Matt Hoy bangs one off and ready for another.

Merewether amassed 81.57 points in the final to easily defeat Central Coast club Avoca (69.05). Port Macquarie (64.69), with former top professional Mick Campbell in fine form were third, while North Shelley (56.10) finished fourth.The Merewether team were a class above their opposition with Paul Parkes surfing first and scoring 16.37 points before handing over to the veteran former professionals Hoy (15.37) and Egan, who logged the final’s best individual score of 20.77 on his 41st birthday. Jackson Brent and Rhys Smith then did their job to ensure victory.The All four finalists qualified for the National final whichis expected to witness a raft ofelite ASP World Tour surfers including world champion Mick Fanning, world number two Joel Parkinson, Dean Morrison, Taj Burrow, Kai Otton and Courtney along with numerous other top line competitors lining up for their beloved clubs.After the event Hoy said it was an amazing day for the Merewether club and the local club scene.“To win was awesome and a great feeling, to have the old boys back was just so good,” Hoy said.“We had good support on the beach, close to our home beach, and it’s a great day for club surfing in Australia.“That’s where you start your surf career, around the club and local area so this is sweet.”When asked about his club’s chances in next month’s National final the 38-year-old oozed confidence.“We’re going to win it! We’ve got a good team, we’re consistent with the old heads and some good young guys and we are not going there not to win,” Hoy said.“It takes tactics and Surftag is like a race and we can win that race. We’ll give it a good go.”Avoca’s Beau Atchison notched the highest “Powerwave” score of the day – a 7.83 in the semi-final - earning a Sanyo dual waterproof camera as a reward for his efforts.Earlier in the day, one of the event’s favourites, Umina, with WCT competitor Drew Courtney at the helm, were bundled out in the semi-finals.The Surftag format sees five-member teams given an hour in which each individual must catch three waves, with the second being a “Powerwave” worth double points. All three waves for each surfer count in the scoring and bonus points are awarded for teams that finish before the 60 minute mark.The next event in the series will be the NSW South Surftag event at Cronulla on January 30/31.2010 NSW North Jim Beam Surftag Championships1. Merewether * - $15002. Avoca * - $7003. Port Macquarie * - $6004. North Shelley * - $500 * Qualified for National Final atNorth Narrabeen beach on February13/142010 Jim Beam Surftag Australian Series23rd Oct           Industry Challenge – Winner: Hurley29th Nov          Women's Surftag – Winner: North Narrabeen19th Dec           VIC Qualifier - Winner: Phillip Island9th Jan              WA Qualifier - Winner: Margaret River ‘A’15th Jan            QLD Qualifier - Winner: Kirra23rd Jan            NSW North Qualifier - Winner: Merewether30/31 Jan          NSW South Qualifier12/13/14 Feb    Australian FinalThe 2010 Jim Beam Surftag Australian Series is proudly supported by FCS, Tracks, Swellnet, Sanyo, Beever and Global Surftag.For more info go to:www.globalsurftag.com